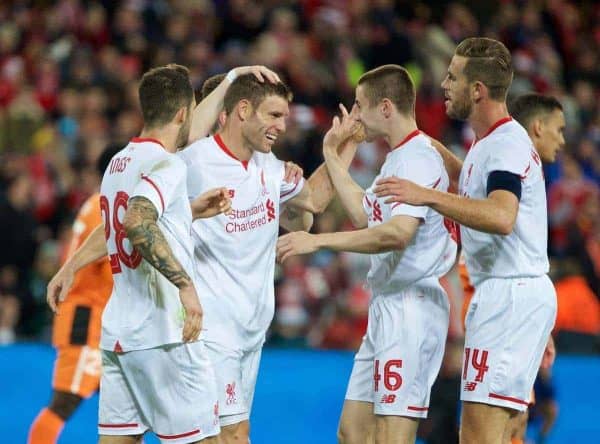 Goals from Adam Lallana and James Milner saw Liverpool through as they defeated Brisbane Roar 2-1 in the second clash of their pre-season tour.

After a hit-and-miss performance against the True Thai All Stars in their first pre-season clash, Brendan Rodgers’ Liverpool looked in better condition as they ran out 2-1 winners against Brisbane Roar on Friday.

Goals from Adam Lallana and James Milner cancelled out Dimitri Petratos’ fine opener to give Liverpool two wins out of two so far this pre-season.

Rodgers, who named two different lineups in the previous clash in Bangkok, started with a strong selection.

Meanwhile, Joe Gomez, Lucas Leiva, Danny Ings and Divock Origi were all given the chance to impress.

It was Gomez who made the most immediate impact, with his forays up the left flank threatening the Roar defence and seeing the former Charlton Athletic man combine well with Lallana.

Strong bouts of possession from the Roar finally saw Petratos take advantage, with some fine footwork thwarting Skrtel before his low drive dribbled beyond Mignolet.

It took Liverpool just 11 minutes to equalise, however.

With Lallana receiving the ball inside the area, the 27-year-old cut past his marker and curled a fine effort beyond former Reading goalkeeper Jamie Young.

Liverpool would have been much more comfortable were it not for the goalkeeping exploits of Young—a player Rodgers brought to England as academy director at Reading in 2002—with the 29-year-old producing some excellent saves.

Ings, Henderson and Jordon Ibe—impressive in a second-half cameo—all tested Young before Milner put the tie to bed.

Liverpool’s star man, Milner, took up a loose ball in front of the Roar penalty area and drove towards goal.

Sidestepping one Brisbane defender, Milner lofted an effort up and over Young to seal victory for the Reds.

After the game, Milner told LFCTV: “It’s important to get the result.

“Fitness is the most important thing, but to get the win is nice.”

Liverpool’s new No. 7 concluded: “This club is used to winning, and I want to be part of that and win trophies for this side.”

With a strong performance against Brisbane on Friday, Milner showed true quality and linked up well with the likes of Henderson, Lallana and the excellent Gomez.

Liverpool will now look to prepare for Monday’s clash with Adelaide United as their warmup tour continues.