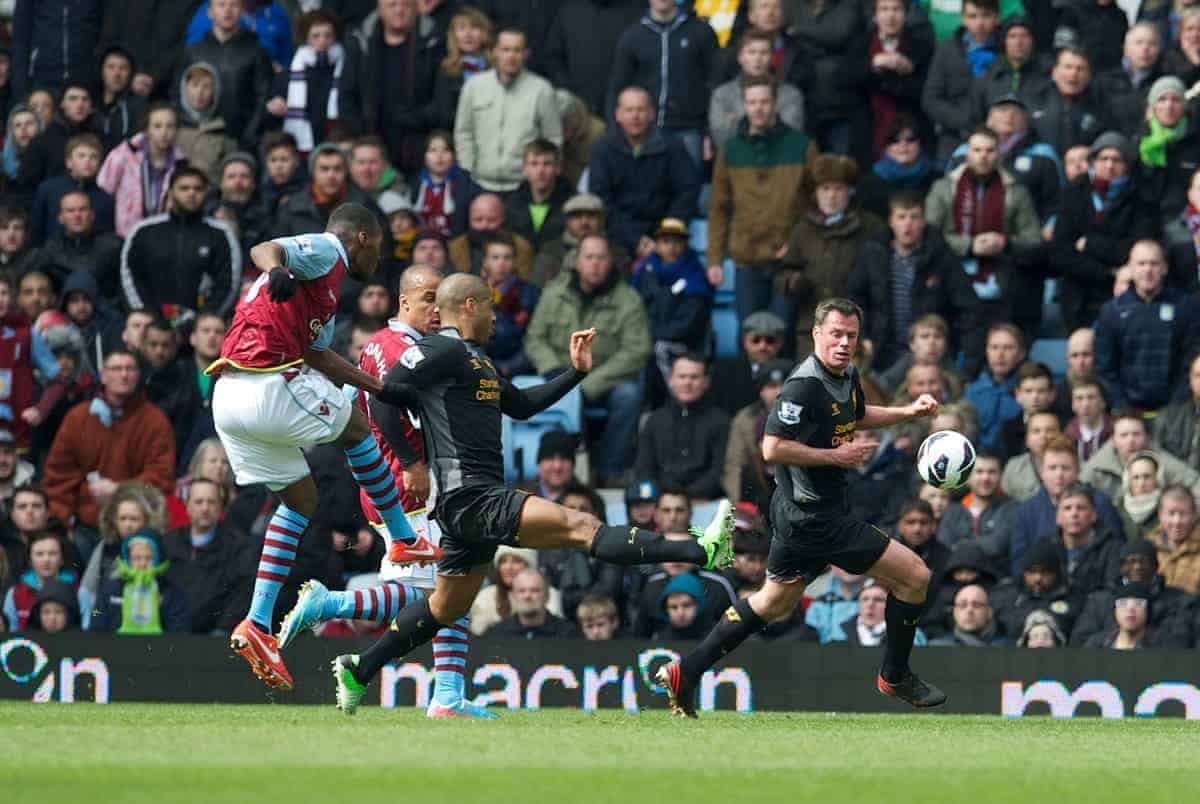 With Christian Benteke now officially a Liverpool player, Henry Jackson takes a look back at the five times the Belgian has scored against the Reds.

Benteke has finally completed his move to Merseyside, having completed a medical on Tuesday and signing a long-term deal at Anfield in the process.

Although the move has not necessarily been met with resounding positivity with Reds supporters, the former Aston Villa man is a player who has tormented Liverpool a number of times in the past.

Benteke’s daunting physical presence has proven to be a thorn in Liverpool’s side time and time again throughout Brendan Rodgers’ tenure, with the burly striker netting five times against the Reds.

This was a day in which Rodgers’ men were torn to shreds by a rampant Villa at Anfield, and Benteke produced a fabulous individual performance against his future employers.

His long-range effort beat Pepe Reina in front of the Kop in the first half to set the ball rolling, before an exquisite backheel found Andreas Weimann to make it 2-0 before the break.

Benteke then ran at the Liverpool defence in the second half after Joe Cole had lost possession, powering his way past Martin Skrtel before finishing clinically.

Steven Gerrard’s late consolation may have been a rare positive moment for the home faithful, but it was Benteke’s man-of-the-match display that deservedly made the headlines. Although Liverpool came away with all three points at Villa Park during a tight contest in March 2013—gaining revenge for the 3-1 loss a few months earlier—it was Benteke who was again his side’s biggest threat.

The Belgian fired home a terrific effort from the edge of the box to give Paul Lambert’s side a half-time lead, and his aerial presence was a constant issue for the Reds.

Fortunately, Jordan Henderson levelled and Gerrard’s penalty won it for Liverpool, but they had felt the full force of Benteke once more, and not for the last time either. There can be no doubting that Villa have been a bogey team for Liverpool over the last couple of years, and they put a real dent in Liverpool’s campaign back in January last year.

Weimann stunned Anfield after finishing off a flowing move after 25 minutes, and Benteke headed home after a terrible misjudgement by Simon Mignolet. Once again the Reds hadn’t dealt with his presence in the air.

Daniel Sturridge and another Gerrard spot-kick earned Liverpool a point in the end, but Benteke had played a big part in the hosts dropping two valuable points.

With rumours growing increasingly strong that Benteke was Liverpool’s main summer transfer target, the Belgium international showed exactly what he was made of against the Reds in the FA Cup semi-final back in April.

Philippe Coutinho‘s opener had seemingly set Rodgers and his team on their way to the final, but the lead didn’t last long.

Benteke produced a terrific side-footed finish past Mignolet to complete a slick Villa move, and he was a menace to the defence all afternoon.

Fabian Delph scored the winner at Wembley to send Liverpool crashing out, but as has so often been the case over the last three years, Benteke had been the catalyst in inflicting misery on the Reds.