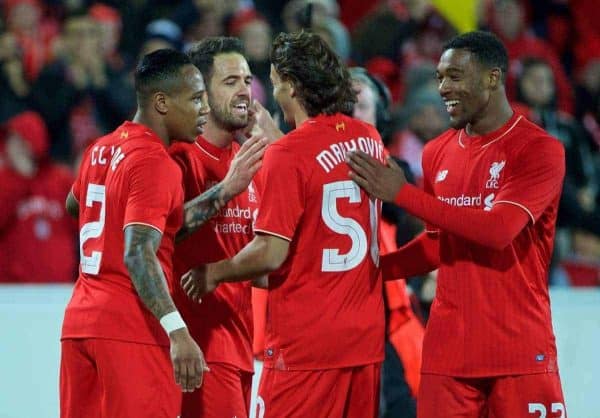 Following Liverpool’s 2-0 win over Adelaide United on Monday, we round up the best of the social media reaction from the game.

Brendan Rodgers’ side completed their tour of Australia with a solid, if unspectacular, win over the A-League side at the Adelaide Oval.

Well-taken goals from James Milner and Danny Ings in the second-half clinched victory, with the latter finding the net for the first time in a Reds shirt.

There were terrific performances from youngsters Joe Gomez and Jordon Ibe, while Joe Allen, Jordan Henderson and Milner all impressed in the middle of the park.

It was a nice way to sign off Down Under, and attention now turns to Friday’s friendly against a Malaysia XI in Kuala Lumpur.

Here is the best of the reaction from social media, both during and after the game:

Good to see Ings off the mark, you dont want these things dragging out like it did with poor old Rickie last sunmer.

LFC 1st half clearly split again – high press early on, then deliberately sitting back to give ADE more possession. that’s why it got flat.

Origi is going to miss some big chances in 2015/16, isn't he? Clearly got massive potential but looks so, so raw.

Not much to write home about for most of that but a strong finish with Ings and Milner making the most of what limited chances were created.

Not a slight on Nathaniel Clyne, but Joe Gomez has been #LFC's most impressive full-back so far this pre-season.

I find it hard to understand how a man with the skills and work ethic of Lallana, at 27 still makes such poor footballing decisions

Great attack from Clyne and Ings. Ings deserved it. He’s been lively and creative so far this pre-season. Good potential there.

Man of the Match #Ibe with an assist for #LFC's new boy James #Milner. We deserve the lead, albeit having a lack of clear-cut chances.

Given how composed Joe Gomez has looked, is it too much to ask for some Malaysia minutes for Chirivella, Rossiter, Ojo, and Wilson?

Ibe is a special talent. He's got every attribute an offensive player needs. A player England lacked in last 20 years.

Just hope this isn’t the Voronin effect, where new signings play really well in pre-season and struggle for the rest of the year.

Great to see Alberto Moreno back. Hopefully quashing speculation of a move away this summer.

Think even the coaching staff are a bit surprized how good Gomez seems to be.

Ings on YNWA: "It's unbelievable wherever you go. I was just looking round thinking 'how have we sold out here?' It's massive for the club."

What did you take from Liverpool’s 2-0 win over Adelaide United? Let us know in the comments below.