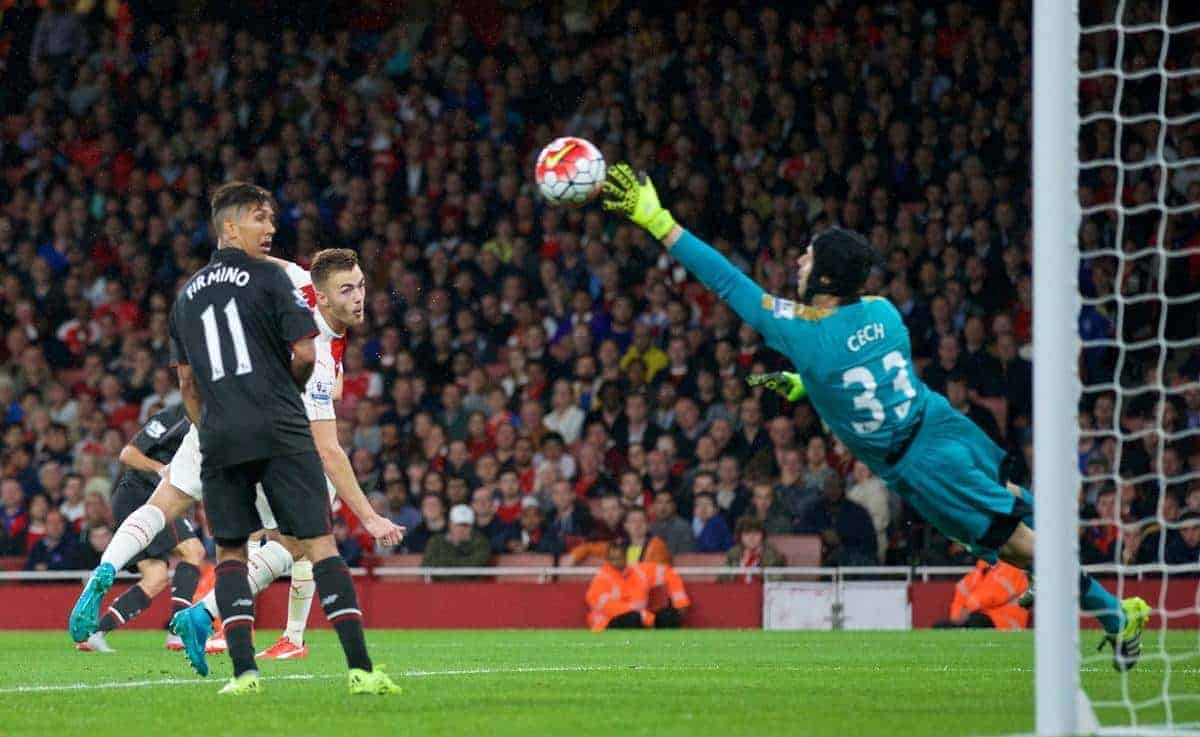 Arsene Wenger praised Petr Cech after his goalkeeper made two vital saves to earn a point at home to Liverpool.

Although the summer recruit was key to the Gunners taking a share of the spoils, Arsenal will feel hard done by having had a legitimate Aaron Ramsey goal disallowed for offside and – with one win from their opening three games – Wenger conceded it has been an average start to their Premier League campaign.

Cech made a point-blank stop to deny Christian Benteke and also tipped a Philippe Coutinho strike onto the post as Liverpool dominated the first-half.

It was roles reversed after the break as Arsenal looked the more likely to take the three points, but a fifth home game in six without a goal meant they had to settle for the draw.

“We have started very average I must concede,” Wenger said after the game. “We have four points from two homes games and won the most difficult game away from home.

“I think sharpness is missing a little bit in some players. I would like to give credit to Liverpool, they defended well and were quick to close us down.

“With the domination we had in the second half if you don’t score the first goal the other team doesn’t come out.”

Wenger went into the game with both first-choice centre-backs sidelined as Per Mertesacker missed out through illness and Laurent Koscielny was absent with a back complaint.

Calum Chambers and Gabriel were thrown together, with the former struggling against Benteke and Coutinho in the first half – although Wenger praised his defence for keeping a clean sheet.

He said: “I believe they have not the experience to play together, they have come in from one day to the next but overall we didn’t concede and Petr Cech saved us two or three times in the first half – during that period he was outstanding.

“Second half I think we should have won the game, we were a bit unlucky, we lack still a little bit physically and collectively to finish well what we start. Our game is still not fluent enough in the final third.”

After a difficult start to his Arsenal career, Cech was pleased to show what he can do following his summer move from Chelsea.

“When you start with a new club and everything goes wrong, you need to bounce back and this is what I tried to do,” he told Sky Sports. “Today was one those games where I was in the right place at the right times and helped the team overcome a difficult moment in the first half.

“The shot of Coutinho, I saw the ball all the way so I managed to get there. With Benteke, I think it was Gabriel who tried to intercept the ball in front of me so I had to wait, I knew I had to be there fast and I got a bit of luck, I closed it down quickly enough.”

Wenger was left disappointed by the decision to chalk off Ramsey’s strike and insisted he could tell at the time the midfielder was being played onside by Martin Skrtel.

“It was a regular goal,” he added. “It was in a period of the game when we had the most problems defensively but it is a regular goal, I cant see why it was cancelled – it was clear.

“I didn’t ask for an explanation, what does it change? It is about decision making and they got it wrong, I could see live that he could not be offside.”

Liverpool boss Brendan Rodgers is still to see his side concede this season but was also left bemoaning the missed chances that could have given the visitors the win.

“We definitely could have had all three points,” he said. “Performance-wise I was very happy with how we worked. First half in particular we created chances and should have been in front. In the second half you always expect pressure.

“Our performance level has grown over time our defensive organisation is good against big teams.

“Cech had a period of 10 to 15 minutes when he made some magnificent saves. Congratulations to the keeper. Simon Mignolet had to make some good saves as well of course.”