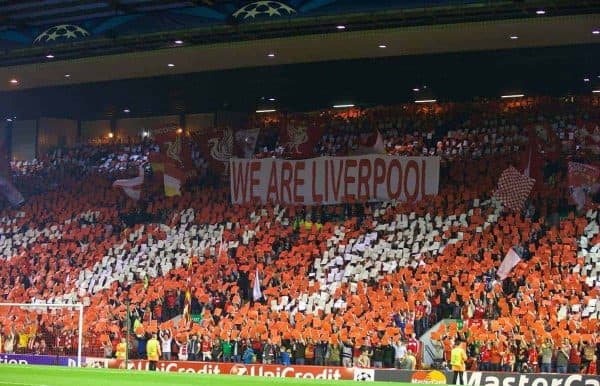 After Liverpool were drawn against Rubin Kazan, Bordeaux and FC Sion in this season’s Europa League, supporters responded with optimism.

Liverpool will face Rubin Kazan, Bordeaux and FC Sion after they were drawn in Group B for this season’s Europa League.

A long trip to Russia stands out as the biggest test for Brendan Rodgers’ side in what represents a reasonable group with Kazan (5th), Bordeaux (6th) and Sion (7th) all enduring lukewarm league campaigns last season.

The likes of Danny Ings, Alberto Moreno and Divock Origi will all be hopeful of increased game-time when the competition kicks off in September.

But how did Liverpool supporters react to Friday’s Europa League draw?

Here’s the best from social media and our forums.

Fairly kind draws. Rubin Kazan away the toughest game, but they're only in it because Dinamo Moscow got banned due to FFP failure. #LFC

Could do without a trip to Russia but Reds should get out of the group. Bring it on

Decent draw for Liverpool i guess. Hoped for better.

Sion provokes a smile. Remember being at that nuts 6-3 against them in the Cup Winners Cup.

Kanonkop on the forums:
“I think that is a very kind draw for us. One lengthy fly away to Kazan but the rest is dead easy.

No tricky teams there and we should comfortably qualify from that group.”

Should win that group handy. Have a strong enough squad to leave stars like Coutinho, Benteke and Lovren at home against Kazan. #LFC

Good group for those interested in Vodka, Wine and Chocolate #LFC Got to be getting 12 points minimum from that

mattyhurst on the forums:
“I think we’ve got a pretty good draw in terms of travel and also quality of teams, hopefully the Russian trip is late on and we are not reliant on it…. Then the U21’s can have a trip out there.”

Apart from the lengthy trip to Kazan, it's a good draw for #LFC . I wonder if the reserve team will be deployed.

norwegian wood on the forums:
“All right, very decent draw that. Sion and Bordeaux should be two nice away trips for the fans. Rubin less so, but from a footballing point of view it could have been worse. We avoided Dortmund and the Spanish teams, which we should be happy with.”

Europa league draw wasn't so bad for us ?? #LFC