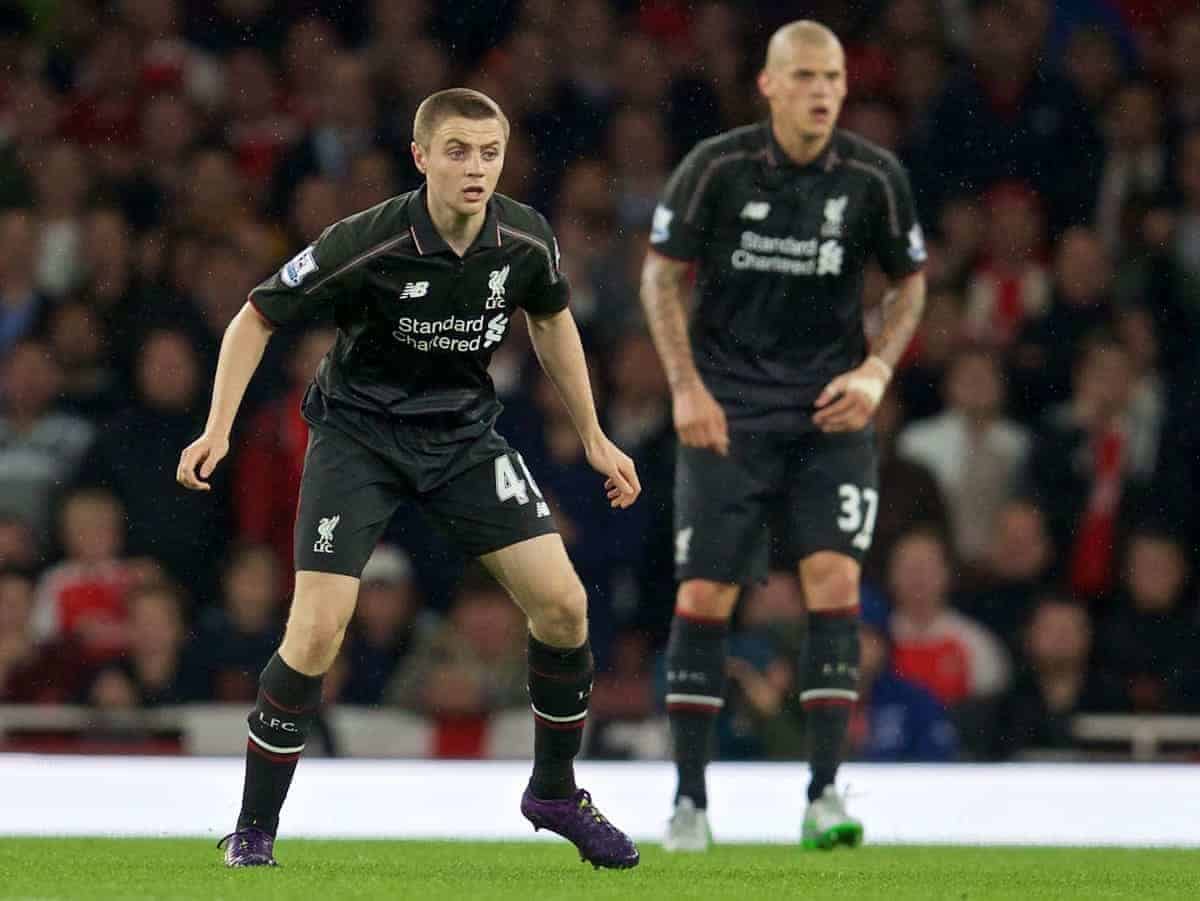 After making his Premier League debut in Monday 0-0 draw with Arsenal, Jordan Rossiter has a bright future at Liverpool, writes Jack Lusby. Seventy-five minutes into Liverpool’s 0-0 draw away to Arsenal on Monday night a dream came true for midfielder Jordan Rossiter.

Replacing Lucas Leiva to make his Premier League debut at the Emirates Stadium, Rossiter marked another significant milestone in his Liverpool career so far, and in a comfortable cameo he hinted at a bright future on Merseyside.

The 18-year-old has consistently shown he is ready to step up into the first team, and Brendan Rodgers’ use of him certainly shows he trusts him.

So where does Rossiter stand among Rodgers’ many talented midfielders at Liverpool? Rossiter made his debut for Liverpool’s Under-18s on his 15th birthday, and has quickly risen through the ranks to take on a key role in Micheal Beale’s Under-21s side, as well as regular training with the first team at Melwood.

Having earned comparisons with Steven Gerrard in the past, it would be easy to assume that Rossiter is another barnstorming box-to-box midfielder akin to his fellow Scouser.

But the 18-year-old is a much different proposition.

In terms of attributes and similarities within the current Liverpool squad, Rossiter can posit himself between Joe Allen and Jordan Henderson.

Best utilised as a deep-lying playmaker, Rossiter is blessed with an all-round game that allows him to suit a number of different roles. He can tackle, he can pass and he can navigate tight situations in midfield with ease.

He has the close control and spacial awareness of Allen, but the tenacity and unpolished creativity of a young Henderson. Rossiter has a lot of physical development to do, but at 18 he has the raw qualities to suggest he can be a leading midfield player in the Premier League.

His role against Arsenal was tailored to make the most of this balance of quality.

Replacing Lucas, Rossiter effectively switched roles with James Milner, with the 29-year-old dropping into the deep-lying role while Rossiter joined Emre Can in supporting him with suffocating pressing play in midfield.

When Liverpool were lacking in energy towards the end of the tie, Rossiter’s introduction injected enthusiasm and vitality to aid a solid defensive display.

He kept things simple and tidy, completing all of his four attempted passes and making a tackle and an interception in a comfortable 15-minute performance.

He offered an outlet for the Reds in moving the ball out of defence and helped form what was effectively a nine-man block ahead of the penalty area.

It was an unremarkable performance, but one of huge significance for Rossiter’s future. Rossiter’s inclusion, along with a clutch of other bright young academy talents, in Rodgers’ squad for Liverpool’s pre-season tour of the Far East and Australia was to be expected—the manager has included his best youth prospects in pre-season since his arrival in 2012.

Having recently recovered from a serious ankle injury however, this will have been an important show of faith for Rossiter.

The 18-year-old went on to start Liverpool’s first game of the tour, in Bangkok against the True Thai All Stars, and this will have reinforced his belief under Rodgers.

Rossiter was the second-youngest player to be named in that starting lineup, with Joe Gomez just two months his junior, and the only player to have been brought the academy as a scholar—Andre Wisdom having been signed from Bradford City in 2008.

Mixing it in midfield alongside Portuguese import Joao Carlos Teixeira, old hand Lucas and £20 million signing Lazar Markovic, Rossiter’s presence was a nod to promising movements in the academy.

A year ago, Rodgers described his approach to youth development through the first team, saying: “Young players will never have a better opportunity at any club than at Liverpool.”

“New players coming in here won’t stand in their way,” he continued.

These words will have served as encouragement for Rossiter, and following his Premier League debut at the Emirates, Rodgers is acting on his assertion.

Rodgers could have introduced another centre-back to support Liverpool’s defensive effort, with Mamadou Sakho waiting in the wings, but he chose to put his faith in Rossiter, and this will have boosted his confidence immeasurably.

Rossiter ended a mature post-match assessment with a wistful “hopefully my chance comes again,” and it seems only a matter of time before we see more of the midfielder in the top flight.

But where does he fit into Rodgers’ plans for the future?

Role for the Future? Rossiter taking Lucas’ place in the midfield at the Emirates may be symbolic of Rodgers’ plans for the future, despite the manager stressing that the Brazilian would not be sold this summer in his post-match press conference.

“He’s certainly very important to what we want to do,” he told reporters. “He is highly respected by me, the coaching staff and the players.”

Lucas was set to fly to Istanbul to seal a move to Turkish giants Besiktas the morning after Liverpool’s trip to north London, but his inclusion against Arsenal has signalled a change of plan for both player and club.

Rodgers has seemingly decided that Lucas remains a crucial part of his first-team plans. But at 28 and decidedly limited in terms of playing style, the extent of his role remains to be seen.

Could Rossiter be competing with the former Gremio man this season?

Their playing styles are different, for sure, but Rodgers’ words after the Emirates stalemate suggest that a specialist defensive midfielder will not feature in his tactical remit much in 2015/16 and beyond.

“There are games in which I will pay three midfield players and not always want a specific defensive one,” he said.

“But when we do need that, [Lucas is] the best that we have.” It is more likely that Rodgers opts for a “controlling” option as his third midfielder alongside Milner and Jordan Henderson, with his recent praise for Emre Can as that mould of player indicative of this.

Rossiter would suit this role, too. His tenacity in breaking up play, tight close control in possession and impressive passing range would allow him to operate in a deep-lying role, provided that the likes of Milner and Henderson offer support.

Alternatively he could take up the position he assumed at the Emirates, with Milner dropping deeper.

Rossiter has the potential to develop into a strong, well-rounded midfielder with a dynamism that suits Rodgers’ long-term vision perhaps more so than Lucas.

He clearly has faith in the 18-year-old, and Rossiter is well placed to repay him at Liverpool.