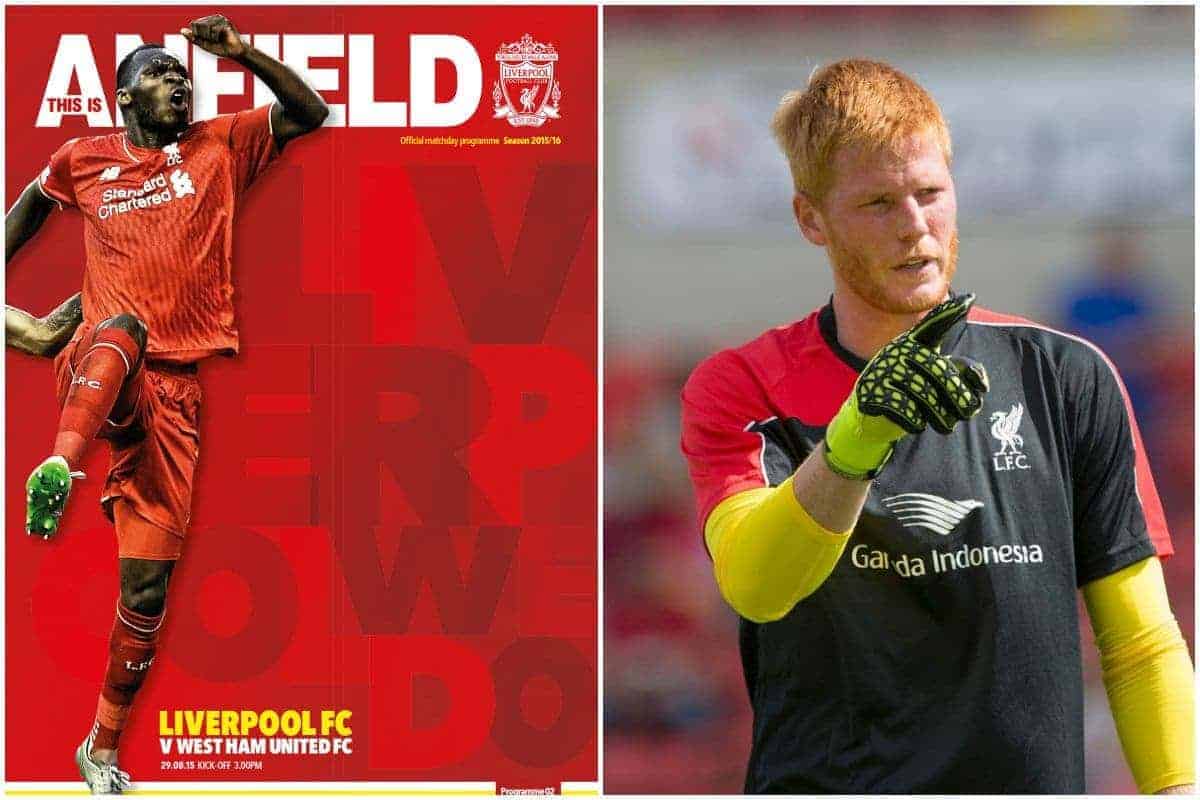 The Reds have only dabbled with redheaded keepers before a few times (although for all I know Charlie Jowett, who played once in 1897, might have looked like Groundskeeper Willie off The Simpsons) and without too much success.

Mike Hooper immediately springs to mind. Brought in from Wrexham in 1985 to be Bruce Grobbelaar’s back up after big Bob Bolder got bored of playing for the reserves, Hooper was tall, ginger and, according to his team-mates, a bit bonkers.

“There was a greasy spoon cafe [in Majorca] that did fry ups,” recalled Nicky Tanner in Si Hughes’ ‘Men in White Suits‘. “The sign outside was advertising six English breakfasts for the price of five. So Hoops went in, put a big order in and ate them all.”

He was also a keen birdwatcher, which perhaps explains why he was rooted to the spot when Anders Limpar chipped him at Highbury in April ’92 (he may have mistaken the sound of a lesser-spotted singing Arsenal fan for a great tit) but Hooper is one of the few second choice Anfield keepers to get a decent run in the Liverpool side in the last 30 years.

It gets forgotten that he made 25 appearances in what was almost our second double-winning season of 1988/89 (Grobbelaar was ruled out with meningitis) and was given a 14-game run in early 1992/93 when Graeme Souness rotated his keepers so often that even David Burrows had a go in Moscow, but Hooper never convinced anyone that he should be first choice.

Since then only David Martin – son of boyhood Kopite and West Ham legend Alvin, who also features in the matchday programme this weekend – has been a redheaded Reds reserve keeper for any length of time although David Roberts was perhaps a little unlucky not to progress having been an FA Youth Cup winner and I suspect both Michael Stensgaard and Jorgen Nielsen were close.

So what about Bogdan? Having been second choice at Championship Bolton for most of last season he hardly smacks of a signing to put Simon Mignolet – Liverpool’s most expensive keeper of all time – under genuine pressure for his first-team place, but then I’m not sure ANY Premier League reserve keeper gets a fair opportunity to prove himself these days.

Brad Jones was Liverpool’s second choice keeper for half-a-decade. He set a new club record last season for being the first LFC player to be an unused sub in over 100 Premier League games and 125 in total. It’s one way of jumping the season ticket waiting list I suppose, but how many games did the Aussie play at Reserve level during his five years here? Seven. But none since Brendan Rodgers became Liverpool manager in 2012.

Given the ‘Reserves’ were replaced by an Under-21s league that summer you can’t really blame Rodgers as Jones was 30 at the time (although one overage keeper and three overage outfield players are permitted), but precisely how was he meant to prove to his new manager that he could’ve been good enough (even if you, like I, think he wasn’t) to replace Pepe Reina other than by impressing John Achterberg at Melwood?

Bogdan is in the same boat now. He’ll probably get 90 minutes against Carlisle, and maybe the odd Europa League game, but essentially he’ll only be handed a decent run in the Liverpool side if Mignolet gets injured, suspended or plays as badly as he did last Autumn. Which, after three clean sheets and some impressive saves at Arsenal, looks far less likely to happen.

It’s not like Liverpool have a long list of keepers forcing their way in on merit due to cat-like displays in the reserves, but I fail to see how Bogdan, or any other keeper for that matter, can improve (or remain sharp) only by training and not playing competitive football. Which will make the performance of West Ham‘s Darren Randolph interesting viewing on Saturday.

With Adrian still suspended after a straight red card for re-enacting a move from Street Fighter II on Leicester’s Jamie Vardy, Randolph will again deputise in the West Ham goal. First choice for Birmingham City last season, he’s already appeared in three Europa League qualifiers for the Hammers this season and last weekend’s 4-3 defeat to Bournemouth. In short, he isn’t coming in from the cold, whereas most reserve keepers these days are, and has an opportunity to prove he should keep his place.

Will it mean he performs better? Perhaps. But then Bogdan could point to his man-of-the-match display for Bolton at Anfield last season (which earned him a move to Liverpool) as being only the second game he’d played in since August and suggest that the only rustiness about him that day could be found on his head.

So maybe having a ginger reserve goalie who never plays won’t be so bad after all, but I’d like to see a return to the days when second choice keepers also played at reserve level so their first-team potential can be assessed properly.

• The new-look This Is Anfield matchday programme is available at the ground on matchdays, from official Liverpool FC club shops or to order from www.sportmediashop.com. Subscribers can currently save £12, the equivalent of three issues free.

Liverpool vs. West Ham is a 3pm kick-off at Anfield on Saturday.