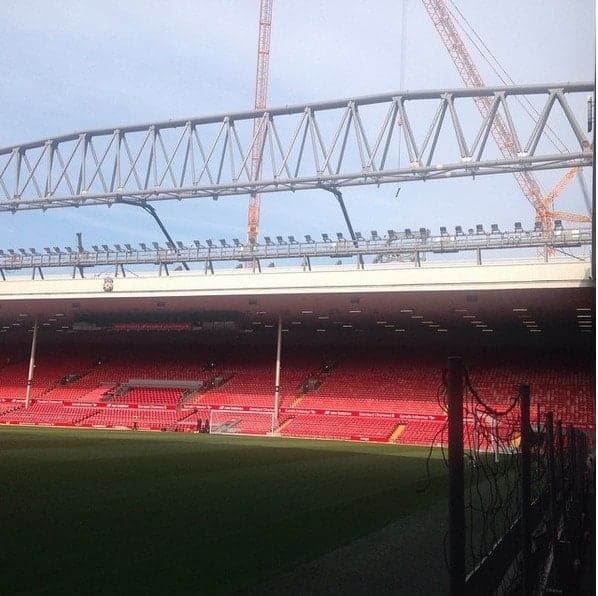 Liverpool supporters arriving at Anfield tonight for the first home game of the season will see a very different skyline around the stadium. Much has changed around Anfield since it last hosted a match – the defeat to Crystal Palace on Steven Gerrard’s final home appearance back in May.

The new Main Stand, which will open next season, has seen huge development take place, with the huge roof truss now dominating the skyline for miles around.

Liverpool physio Chris Morgan posted a photo of the view from inside the stadium, with the new stand above the old Main Stand.

Work on the new stand will continue throughout the 2015/16 season, with the new Main Stand being built behind the existing structure. It will then be a busy summer to merge the two stands together, removing the existing seats and placing in new seats for what will form the lower tier of the stand.

The completed view from the stand is shown below in these images:

The new Main Stand will take Anfield’s overall capacity to close to 54,000. The club will then decide whether to go ahead with expansion of the Anfield Road End – for which outline planning permission has been granted and would include the potential for apartments in the new stand.

Stay tuned to This Is Anfield throughout the day for more buildup ahead of the game.