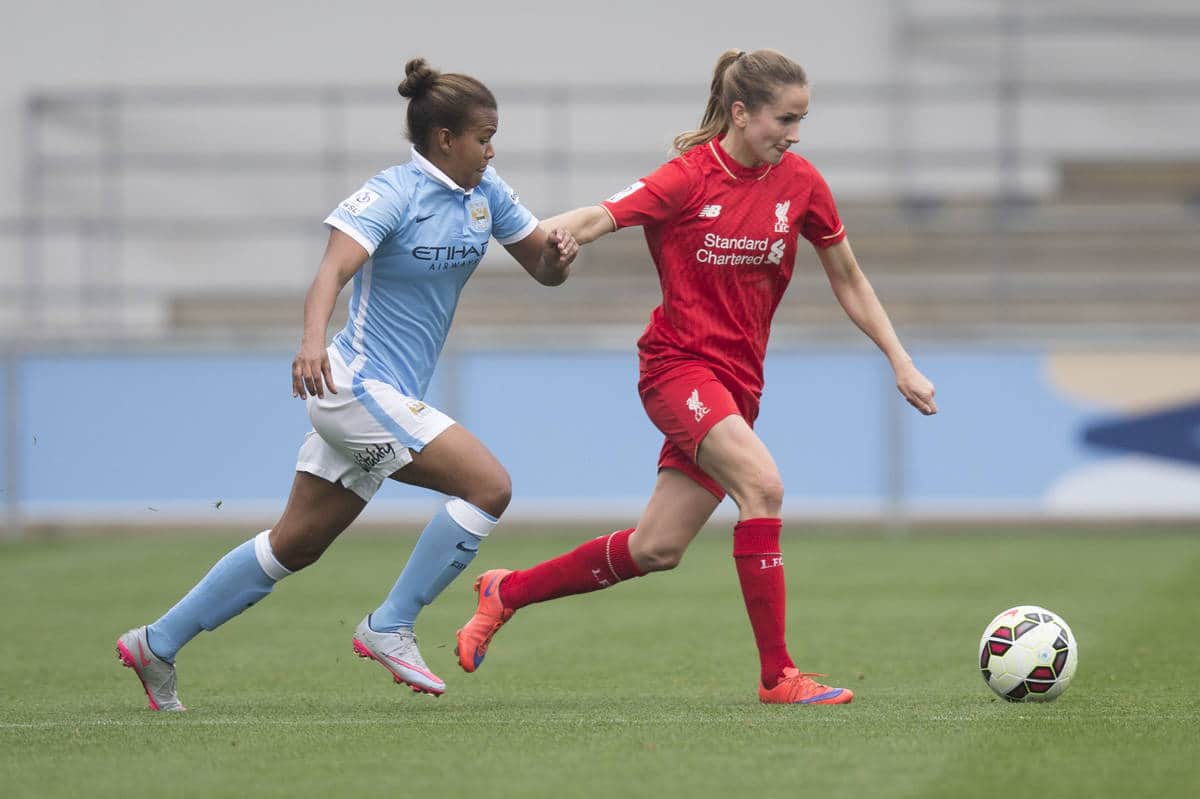 Liverpool Ladies suffered a 2-0 defeat to Manchester City in their last Continental Tyres Cup group game at the Academy Stadium in Manchester. Both teams already booked their places in the quarter-finals by winning their previous four group games, however goals from Toni Duggan and Isobel Christiansen gave Manchester City the top spot in the group.

City dominated the first half with the possession and they looked a lot more threatening within the first 15 minutes of play.

Matt Beard’s side lacked quality in defence as Krystle Johnson caused a lot of problems to Mayumi Pacheco.

It didn’t take long for City to get an opening goal. Pacheco gave the ball away just outside Reds penalty area and Satara Murray fauled Nikita Parris. The penalty was awarded and Toni Duggan gave no chance to Libby Stout from the spot.

The first real chance to equalize came after 30 minutes when Hannah Dale had an effort. The ball was deflected just wide of the post. Then Natasha Dowie had a chance, but she was blocked by former Liverpool player Lucy Bronze who, in result of that tackle, got injured.

Liverpool were forced to make a substitution in the first half as Becky Easton, who earlier made a Carragher-style clearance in the middle of the park, collided with Duggan and picked up an injury.

The second half started better for Liverpool Ladies, but they were unable to create any goal-scoring chances.

Manchester City’s Toni Duggan was injured in the second part of the game after a strong challenge from Natasha Dowie, but even without their best player, City were able to double their lead.

It happened after Liverpool’s Lucy Staniforth played the ball back to Libby Stout. The Reds keeper was under pressure from Isobel Christiansen and struck the ball at the City player.

Christiansen had no other choice but to tap the ball into the empty goal.

Christiansen could then double her tally 10 minutes later, but she fired the ball wide from the edge of the area.

Liverpool had a couple of long-range efforts in the dying stages of the game, but shots from skipper Bonner and Longhurst made no real danger for Karen Bardsley.

Despite a disappointed lost, Liverpool Ladies are in the quarter-finals and the draw will take place on Tuesday morning.

The next game for Matt Beard’s team is at home against Arsenal in the Women’s Super League. You can visit Select Security Stadium in Widnes on Saturday, September 5 and support Liverpool Ladies with a kick-off at 5.30pm.