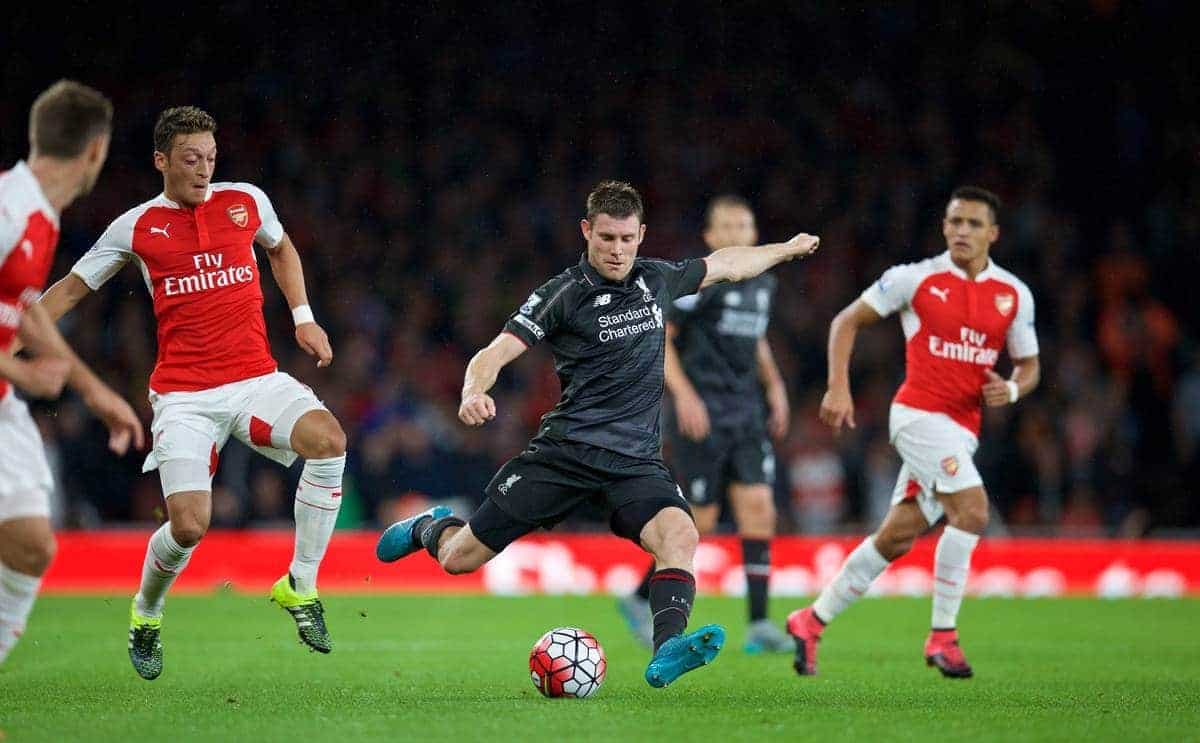 Following Liverpool’s hard-fought draw against Arsenal,  Ben Twelves picks a number of discussion points from a challenging but hugely positive performance at the Emirates Stadium.

Liverpool battled to a well-deserved point with a much improved display in a goalless draw at the Emirates Stadium.

Philippe Coutinho came closest to breaking the dead-lock for the Reds in a first half Brendan Rodgers’ side dominated for large parts, as he smashed the wood-work twice, either side of Aaron Ramsey’s disallowed goal for a touch-and-go offside decision.

The second half saw an improved Arsenal come at Rodgers’ men who still looked dangerous on the break and stood up superbly to a tough defensive challenge in the second 45 minutes to claim a deserved draw.

It was a thoroughly positive performance overall from back to front, and here are the talking points from the clash.

Ruthlessness in front of goal the only missing ingredient

The Reds remain with an uninspired record at the Emirates, but only a lack of clinical finishing in front of goal prevented Liverpool picking up their second win at an unhappy hunting ground.

Coutinho rattled the bar from Christian Benteke’s cut-back after four minutes – a chance that should have found the net – while he was unlucky half an hour later to see his curling strike smack off the post via the finger-tips of Petr Cech.

Minutes later, a guilt edged opportunity to hand the Reds the lead fell to Benteke from Roberto Firmino’s superb ball across the box, but the big Belgian produced a weak finish when he looked nailed on to score, giving Cech a chance to save the Arsenal stopper should never have been given.

After a dodgy start, that was great. I'd have taken that before the game, just disappointed we didn't take our chances. Progress.

Firmino and Milner also saw efforts kept out by the impressive Cech, but the chances that fell to Coutinho early on and Benteke really should have found the net with Liverpool missing only goals from an excellent overall display.

4-3-3 proves the suitable shape for Reds

After two games of a combination of 4-1-4-1 and 4-2-3-1 formations, the Reds lined up in a more familiar shape – and it was plain to see the impact on performance.

The Reds looked far more settled from the off, with a midfield set-up that allowed Rodgers’ side to press in midfield with the relentless energy of James Milner and Emre Can, while also operating with the defensive protection of Lucas Leiva – who produced a solid performance in his anchoring role ahead of Martin Skrtel and Dejan Lovren.

The license afforded by the experienced Brazilian’s presence allowed for a dynamic and penetrative midfield set-up first half, with Milner providing an excellent balance between defence and attack while Can marshalled dominantly with and without the ball linking up well with Coutinho and Firmino, who both caused the home side all manner of problems with the welcome midfield support.

With the middle three able to stay compact and offer suitable defensive support to the back four while also able to break on the counter in a testing second 45, Liverpool undoubtedly benefitted from the change of shape which contributed heavily to a strong performance.

Just two weeks after being named vice-captain, Milner stepped up to the plate as Skipper in Jordan Henderson’s absence with a real captain’s display.

The 29-year-old lead by example with an impressive all-round performance, and he played a vital role in the Reds’ dominating first half – with his energy and underrated distribution keeping Liverpool on the front foot on and off the ball.

While making up for the missing energy of partner-in-crime, Henderson, Milner’s superb start to the game set the tone for those around him – he won two early tackles, before instigating the opening chance Coutinho hit the bar with through an excellent ball round the side which Benteke latched onto and cut-back to the Brazilian.

He started as he meant to go on, and he almost registered on the score-sheet after breaking lines with a Henderson style run in behind, only to be denied by Cech, before retreating to a hard-working but disciplined role in both the box-to-box, and defensive midfield position after the introduction of Jordan Rossiter.

Milner’s effortless transition to life at Anfield continues, and it was another excellent game from the new signing.

A strong defensive display was going to be needed if Liverpool were to come away with anything to show – and the Reds certainly delivered with a third consecutive clean sheet.

In a dominant first 45, the back four – with the assistance of Lucas – dealt nonchalantly with everything thrown their way, and defended strongly, on the front foot all in the new and improved composed manner that has been impressive over the opening three games.

A tough second period provided a real stern test for the Reds backline, but Rodgers will be thrilled with the way his defence stood strong, remained organised, and defended solidly for the vast majority, limiting Arsenal to very few clear chances across the 90 minutes.

Clyne can properly defend. Gomez looks at home at this level. Lovren and Skrtel dominant. And playing like a unit, defending as a team. Nice

Nathanial Clyne and Joe Gomez turned in excellent displays; the teenager made the most tackles of any player on the night (6) – alongside Skrtel and Lovren who, bar the Slovakian enduring a couple of nervy moments, were dominant, decisive and actually resembled a first choice central pairing who are yet to be breached this season.

Injury to Adam Lallana handed a much anticipated start to Roberto Firmino, and the new Brazilian impressed showing real positive signs of things to come.

In a controlling first half, Firmino caused the Gunners all manner of problems with his positional play making him hard to pick-up as he floated into dangerous areas, while his intricate foot work and intensity – which saw him complete the most dribbles of anyone on the pitch (4) – helped provide a creative and influential attacking outlet alongside Coutinho and Benteke.

The 23-year-old played more key passes than any Red (3) and should have claimed his first assist with a superb ball across the six-yard box that Benteke should have tapped home, and only a fine save from Cech prevented Firmino finding the net a minute later as he imposed himself instantly on the Reds’ hugely positive performance.

Firmino’s constant endeavour to work alongside creating – despite his evident lack of fitness – in the 63 minutes he played provided plenty of cause for optimism that he can become a top class talent at Anfield.