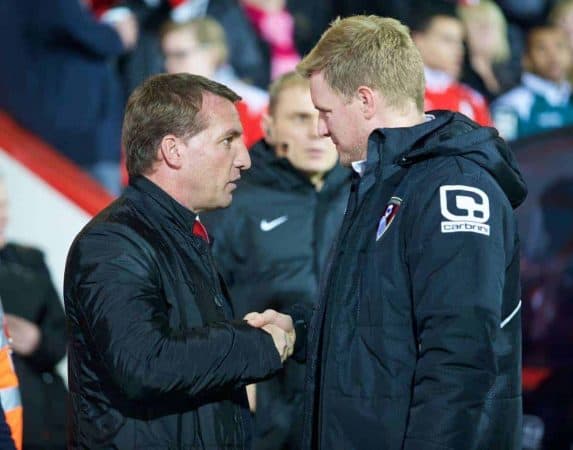 With the new Premier League season just a matter of days away, we take a look at what’s new ahead of the big kick-off.

Another Premier League season is finally upon us.

As the seasons roll one into another it seems almost as if nothing changes. The reality is very different.

Promoted teams arrive while new managers and players turn up in their droves and occasionally, a new match official takes to the big stage for us all to moan at while imposing a new law, or getting to grips with new technological advancements.

So what’s new for the season ahead?

The Championship winners have arrived for their first season of Premier League action, after a remarkable title win.

The Cherries are no strangers to Liverpool, having played in League and FA Cup competition in consecutive seasons, but Eddie Howe’s side will relish the prospect of coming up against the giants of the English game.

Though widely tipped for an immediate relegation, Howe’s side won’t just make up numbers, as busy summer activity has shown.

Highly rated left-back Tyrone Mings joined for around £8million, and the south-coast club have swooped to sign Joshua King, Max Gradel, Christian Atsu, Filipo Costa and Sylvain Distin as well as ‘keepers Artur Boruc and Adam Federici,  while tying down England under-21 striker Callum Wilson to a new contract.

The Hornets return to the Premier League stage after an 8 year absence.

Like fellow promoted side, Bournemouth, Watford will be looking to make their mark on their long-awaited return to the top flight.

The Hertfordshire club have been the busiest of all twenty sides this summer, having made nine new signings as well as having tied down captain Troy Deeney and key man Almen Abdi to new contracts.

The Canaries bounced back to the Premier League at the first attempt following relegation two years ago.

City made light work of the play-offs, running out 3-0 winners at Wembley, and having retained a strong squad also look up for the fight of staving off relegation.

Manager Alex Neil has opted to supplement an already strong group by adding four players this summer, including Andre Wisdom on a season-long loan from the Reds.

The defender joins Youseff Mulumbu and Graham Dorrans who joined from West Brom, and Ireland international Robbie Brady, who signed from Hull City for a reported fee of £8million.

After years in the Football League, Howe is set for his first stab at Premier League management.

The 37-year-old received many plaudits for the style of his side’s play, including from Brendan Rodgers who has previously spoke glowingly of the young manager.

Howe has already received recognition for his work in two spells on the south coast by being named Manager of the Decade at the Football League Awards, and he will be looking to show his managerial talent on the big stage.

The Hornets arrive back in the top flight with a new manager at the helm.

Sanchez Flores was appointed new manager this summer after Slavisa Jokanovic – who guided the Hornet’s to promotion – left the club at the end of his contract.

Acquiring the Spanish coach – who won the Europa League with Atletico Madrid in 2012 – is somewhat of a coup for Watford, and a sign of the huge progress the club has made under the ownership of the Pozzo family.

Like Howe and Sanchez Flores, Neil is set for his debut Premier League campaign.

The Scotsman – who’s only other managerial job before heading to Carrow Road was at Hamilton Academical – will become the youngster Premier League boss, aged just 34.

Neil had only been at Norwich a matter of months before guiding his new side to promotion after 17 wins from 25 games, and the inexperienced boss will have no fear over the challenge of keeping the Canaries up.

Bilic returns to West Ham and the Premier League after 15 years for his first spell as a manager.

The Croatian enjoyed three years in the league as a player at the Hammers and Everton at the end of his career, before moving into management at Hadjuk Split.

Spells in charge of the Croatia national side, Lokomotiv Moscow and Besiktas – where Bilic knocked the Reds out of the Europa League last season – provide a wealth of experience to bring to the Premier League.

Steve McClaren and Claudio Ranieri return for second stints, this time in charge at Newcastle United and Leicester City respectively.

Former England boss McClaren takes over at St James’ Park after an eight year absence from the top flight following spells in Netherlands and most recently at Derby County, while Italian Ranieri returns nine years after leaving Chelsea.

As with every transfer window there has been plenty of business in the Premier League with over £500million spent.

Some signings catch the eye while others fail to get the juices flowing and this summer has been no different.

As usual, the big sides have spent big money, not least Liverpool who look to have pulled off a great signing with Roberto Firmino, while the £49million Man City spent on Raheem Sterling is the most expensive transfer of the window.

There has also been some shrewd business alongside the big money signings.

BREAKING: #CPFC are delighted to announce the signing of Yohan Cabaye on a three-year deal. #WelcomeCabaye pic.twitter.com/R1petCwcbq

Watford have been the most active in the market with ten signings and with little under four weeks of the window left plenty of activity is undoubtedly yet to come.

The new season will bring another new alteration to the ever changing offside rule.

Previously, players have been allowed to stand in an offside position without necessarily being penalised – dependant on whether they were thought to be actively involved in play.

But this season, players will be punished if they clearly attempt to play a ball close to them when their actions impact on an opponent’s ability to play the ball.

Also, a new code of conduct over abuse from managers and coaches towards referees from the touchline will be introduced.

A two-step system could lead to banishment from the technical area for any member of staff, as the FA look to clamp down on abuse of officials from the dugout.

There is also set to be tougher sanctions imposed on teams who surround the referee, with the number of players allowed to approach the match-official in-game down to two.

Players who ignore this can now be booked and clubs could face a charge if the referee mentions as such in his reports.

The team of match officials that oversaw Premier League fixtures in the 2014/15 season suffered a loss this summer.

Chris Foy retired from refereeing after ruling 260 games since 2001, now working with the league’s referees.

With a place to fill, Football League referee Simon Hooper is set for a Premier League debut on the opening weekend, while Anthony Taylor will oversee Liverpool’s trip to the Britannia Stadium.