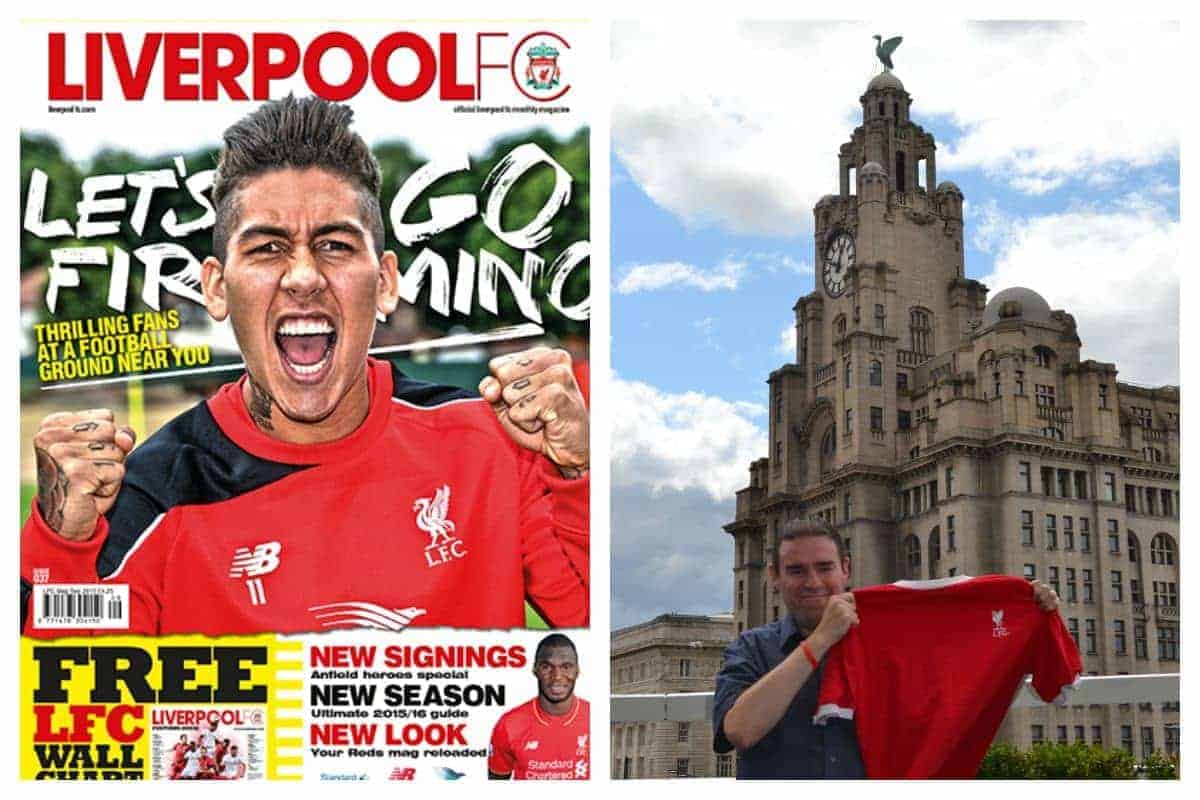 Liverpool’s Official Monthly Magazine relaunched for the 2015/16 season this week with a new look after becoming part of Trinity Mirror’s Sport Media unit.

The club’s This is Anfield matchday programme is also now produced by the Sport Media team with editor Dave Cottrell, assistant editor Will Hughes, writer John Hynes, art editor Neil Haines and designer Lisa-Marie Critchley joined by a brand new signing that former readers of the now defunct Kop Magazine will be familiar with.

Chris McLoughlin wrote and edited The Kop (@TheKopMagazine) for 15 years but following the recent decision to close the magazine – which had a cult following amongst Kopites – has been snapped up to write for both publications.

In traditional LFC fashion he was unveiled holding a Reds shirt in front of the Liver Buildings (above) and the Anfield season ticket holder, who has been attending matches since 1987, is hoping Kop readers will now have a gander at the official LFC Magazine instead.

“It’s sometimes assumed by Reds that anything produced ‘officially’ automatically means a publication is overly censored and bland,” he told This Is Anfield, “but that’s not the case with the Official Liverpool Magazine. It’s written by Kopites for Kopites in a style that we reckon appeals to the different types of supporters that now follow the Redmen.

“Not only does the latest edition contain interviews with Nathaniel Clyne, James Milner and Joe Gomez, we’ve got opinion from Didi Hamann and Neil Mellor – who reckons claims that Brendan Rodgers must change his style of play to accommodate Christian Benteke are wrong – and we’ve analysed every goal and assist, in detail, made by Roberto Firmino last season.

Reading the last issue of @TheKopMagazine. End of an era. pic.twitter.com/HRpPHAlPHy

“We’ve also got hold of George Leekens – the fella who coached Christian Benteke when he was a teenager – produced a season diary with a difference (including why travelling Kopites are likely to bump into a load of Australians and Kiwis when the Reds play Chelsea away) and will tell you why George Sephton might have to dig out a bit of DJ Ronny Mouse for the Anfield PA System. A free fixture poster and three competitions aren’t a bad way to start the season either.

“Obviously I was gutted when the plug was pulled on The Kop Magazine, but I’m made up to still be writing about Liverpool and hopefully some of my readers – a big hello to you both – will continue to read my stuff.”

• The September edition of the Official Liverpool FC Monthly Magazine is in the shops now or can be ordered from www.sportmediashop.com with subscribers currently able to get two free issues when signing up.