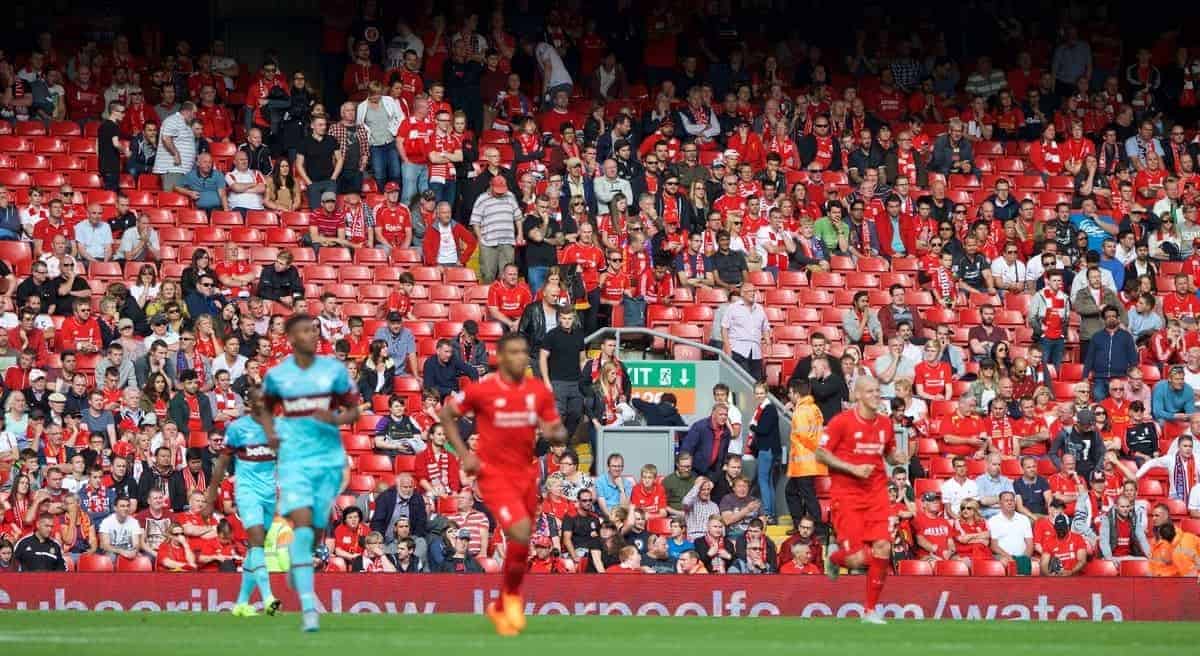 It’s the morning after Liverpool’s defeat against Slaven Bilic’s West Ham, we round-up the best newspaper reaction from a woeful afternoon at Anfield. Brendan Rodgers’ new-look Liverpool had started the season so positively – but a horrendous display on Saturday well and truly sapped a huge chunk of optimism for the campaign ahead.

The Hammers secured their first win in L4 since 1963; it’s highly doubtful they would have expected it to be as easy as it was to claim three deserved points courtesy of goals from Manuel Lanzini, Mark Noble and Diafra Sakho.

For Rodgers’ men, it was a huge backward step from the faultless results of the first three games and the much improved performance of Monday’s draw at the Emirates, instead raising some worrying but all too familiar questions.

It was a dreadful afternoon at Anfield ahead of a now wholly inconvenient international break, and here’s how the papers saw the game.

The Liverpool Echo’s James Pearce pulled no punches, labelling the performance a “throwback to the dark days” of last campaign before rightly alluding to the poor displays of Dejan Lovren and Martin Skrtel:

The Reds revival under Rodgers had been built on defensive solidity with three successive clean sheets enabling them to collect seven points out of a possible nine.

But this was a throwback to the dark days of last season as Liverpool’s blundering back four dished out gifts which the Hammers gleefully accepted.

Dejan Lovren will inevitably bear the brunt of the criticism after his shambolic part in the second goal.

Having taken steps towards transforming his Anfield career in recent weeks, the £20million Croatian centre-back regressed.

But Martin Skrtel hardly covered himself in glory either, as he struggled throughout. Suddenly a recall for unused substitute Mamadou Sakho doesn’t feel too far off

Meanwhile, Pearce’s colleague, Andy Kelly, commented on the Reds disappointing lack of control in midfield and a poor afternoon for Emre Can, leading to questioning over where the German is best suited in the line-up.

Unfortunately, even alongside another ‘holder’ in Lucas Leiva, they could exert precious little control on a West Ham side which broke with pace and intent, Dimitri Payet particularly impressive.

Can has always looked better when moving forward into space and in his 45 minutes on the pitch he completed just four of 10 passes in the attacking third.

His recovery tackles after losing the ball are great to watch but an accurate ball in the first place would surely be even better?

Can remains an excellent prospect but his best position remains frustratingly difficult to quantify. His position for the second half was back in the dressing room – and there’s no future in that.

The Telegraph’s Chris Bascombe alluded to the collective ineptitude of the Reds defending, while singling out Lovren’s display that saw a return to the form of his failed first year.

The three conceded were the first against Liverpool this season, but their defenders seemed determined to restore the fragility of previous campaigns. It was dire from the hosts.

For Dejan Lovren, who had impressed in his first three games, it was an afternoon where his heralded ‘turning a corner’ led into a cul-de-sac

This was same old, same old by the Croatian. He inexplicably allowed Lanzini to steal possession near the corner flag on 29 minutes and the flat-footedness epidemic spread across the backline when Noble picked his spot.

David Maddock of the Mirror correctly noted West Ham’s exploitation of Joe Gomez at left back, with the 18-year-old undoubtedly enduring his most testing 90 minutes in a Liverpool shirt.

The youngster, who looked so strong in the opening three Premier League matches, has already been targeted for his weakness on his left side… a problem for a player operating at left-back.

He is so strong, has such great recovery and is a huge prospect, but West Ham ruthlessly exploited his desire to turn on his right foot and play inside, to great effect. Others will follow, and Brendan Rodgers must find a solution.

Andy Hunter of the Guardian summed up a poor display in which “the wheels came off” for Rodgers side on an afternoon that undid any building momentum from a positive start.

For Brendan Rodgers and Liverpool, however, this was a galling, dispiriting defeat capped by a red card for Philippe Coutinho that means he will miss the trip to Manchester United after the international break.

All the encouragement from a spirited start to the campaign disappeared in tandem with their new-found defensive prowess. West Ham shattered Liverpool’s aim of a fourth successive clean sheet after merely 148 seconds and their momentous victory was rarely jeopardised thereafter.

Finally, ESPN’s Michael Cox was another to comment on Lovren’s inept showing, and questioned the Croatian’s long-term suitability, despite a brief upturn in performance.

Lovren endured a difficult debut campaign last season at Anfield, and even though he showed signs of improvement so far this year before this nightmare, he never was entirely convincing.

He often looks too weak for Premier League football. He’s readily exposed in confrontations with opposition strikers, and while he played a couple of lovely straight, penetrative balls in to attacking players, his poor control for the second goal renders all that irrelevant.

Brendan Rodgers must look at alternatives. Mamadou Sakho was on the bench here and offers a blend of physicality and quality in possession, while full-back Joe Gomez will surely end up as a centre-back, so why not start the transition now?