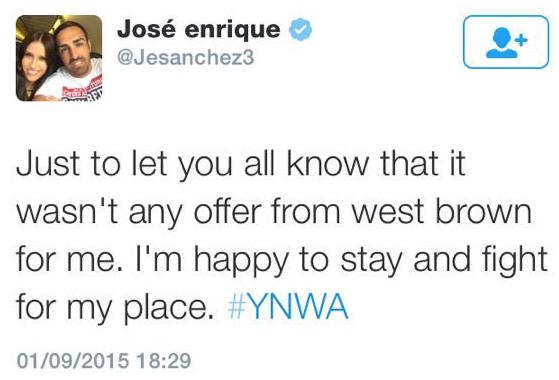 Jose Enrique says he is happy to stay at Liverpool and that there was never any interest in him from West Brom.

Shortly after the transfer window closed on Tuesday, Enrique tweeted “Just to let you all know that it wasn’t any offer from west brown for me. I’m happy to stay and fight for my place.” He then re-added the tweet, correcting the spelling error on West Brom.

Just to let you all know that it wasn't any offer from westbrom for me.I'm happy to stay and fight for my place. #YNWA

Earlier in the day, media had reported that the unwanted Spanish left-back was to join West Brom for a nominal fee – which seemed bizarre given Tony Pulis’ typical style of defender being quite the opposite of Enrique.

The 29-year-old has been made to train away from the first-team squad this summer, along with Mario Balotelli and Fabio Borini.

Earlier this month Enrique gave an interview to Spanish paper AS in which he claimed “I know that if I stay I’ll play.”

Enrique was signed by Kenny Dalglish in 2011, arriving from Newcastle for £6 million. He has made 96 appearances in all competitions, scoring two goals – against Swansea and Wigan in 2012/13, by far his best season for the club.

The following year he suffered a serious knee injury and has never recovered, making 18 appearances in the last two seasons.

Enrique has a year left on his LFC contract and reportedly earns £60,000 per week.