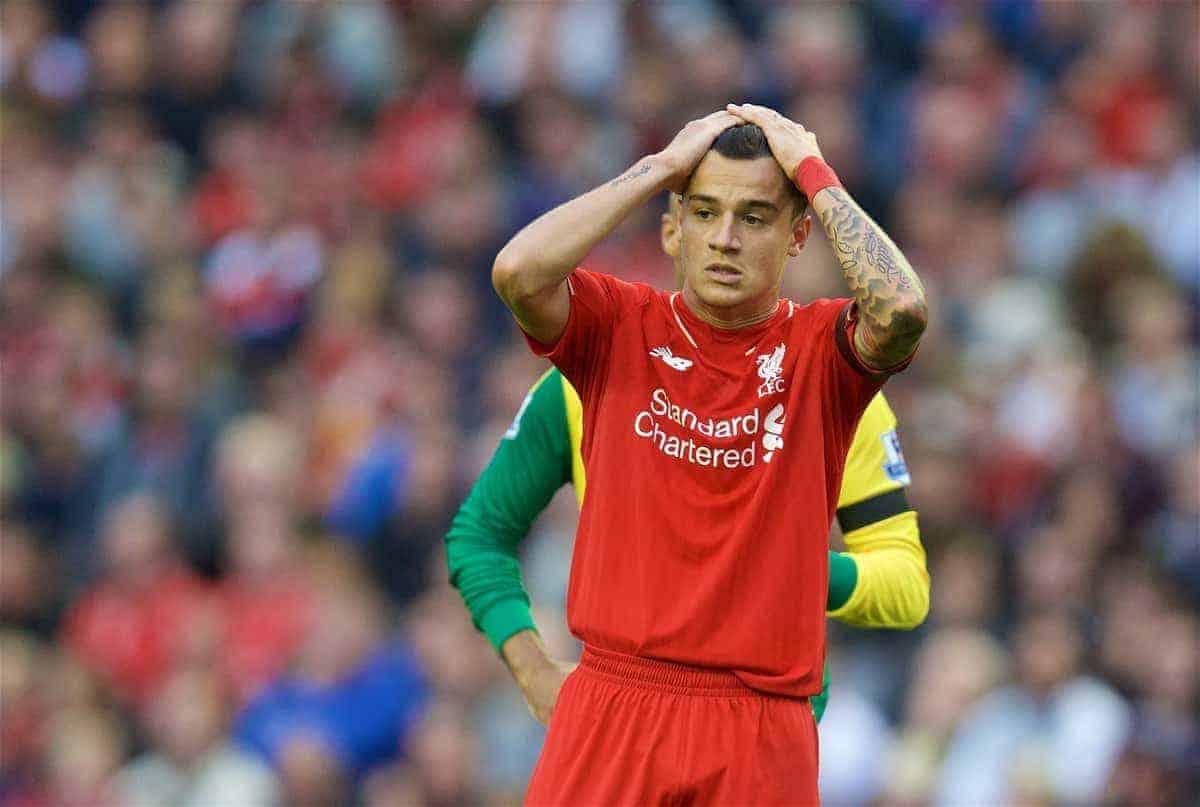 Liverpool were held to a 1-1 draw by Norwich City at Anfield on Sunday afternoon, extending the Reds’ run of games without a victory to five.

There were a smattering of boos at full-time, as the pressure increased on Brendan Rodgers – his side have now scored four in six league games, have a goal difference of minus three, and sit 13th in the Premier League table.

It’s fine margins though; Simon Mignolet makes an error that allowed Norwich to equalise through Russell Martin off a corner, while there were several good chances missed at the other end.

Here are our five talking points from the game.

It was a problem that beset Liverpool last season, especially without proper centre-forwards. All the talk pre-match was about Daniel Sturridge‘s long-awaited return, starting up front alongside Christian Benteke, but it was Danny Ings who upstaged them for the only show of clinical finishing in the game.

Sturridge was understandably rusty, but certainly lively, while Benteke was withdrawn at half-time with a tight hamstring.

Ings finished superbly for his first goal for the club, but thereafter Liverpool failed to take their chances.

Philippe Coutinho endured a poor game and he wasted the best chance. He was through two vs. one with Ings alongside him, but opted to try to beat John Ruddy at the near post and completely fluffed his lines.

Ings had a chance late on but couldn’t quite get the shot away after rounding Ruddy at the Kop end. There were certainly enough chances to have won the game.

When Sturridge departed just after the hour mark, Rodgers opted for Adam Lallana from the bench, meaning a slight chance in formation. The boss overlooked Roberto Firmino, who could have been a more like-for-like replacement and worked alongside Ings up front instead.

Once Firmino did come on, it was Lucas who made way for his fellow Brazilian – despite Lucas having played far better than James Milner in midfield.

Lallana and Milner are clear favourites of Rodgers and the boss’ insistence on playing the likes of them will likely end up costing him his job.

Firmino outshone Lallana in the final 20 minutes with a very lively cameo, always looking to create, get on the ball and make things happen. He needs to be starting games now.

It was another game where Rodgers changed formation multiple times. The Reds started with 3-4-1-2, moved to 3-4-2-1 after Lallana replaced Sturridge, then moved to a flat back four once Lucas was replaced by Firmino 10 minutes later.

One game, three formations, we’ve been here before.

One huge positive, especially in the first hour, was the performance of recalled Alberto Moreno.

The Spaniard provided natural width and was constantly the outlet for Liverpool on the left, creating several half chances for Benteke and Sturridge in the first half.

Joe Gomez has done well in his first games for the club, but Moreno offers natural width on that side.

5. Yet another wasted corner

There used to be an old LFC fanzine called ‘Yet another wasted corner’ – six corners here, all of which were nothing more than catching practice for the Norwich ‘keeper. It was baaffling why Milner continued to take them while Coutinho – who had proven to be a decent corner taker on occasion last season – didn’t. [td_ad_box spot_id=”custom_ad_5″]

At the other end, it was more poor defensive play that ultimately allowed Martin to equalise – Mignolet flapped at the corner and Martin finished well. Again, we’ve been here before. The same mistakes over and over.