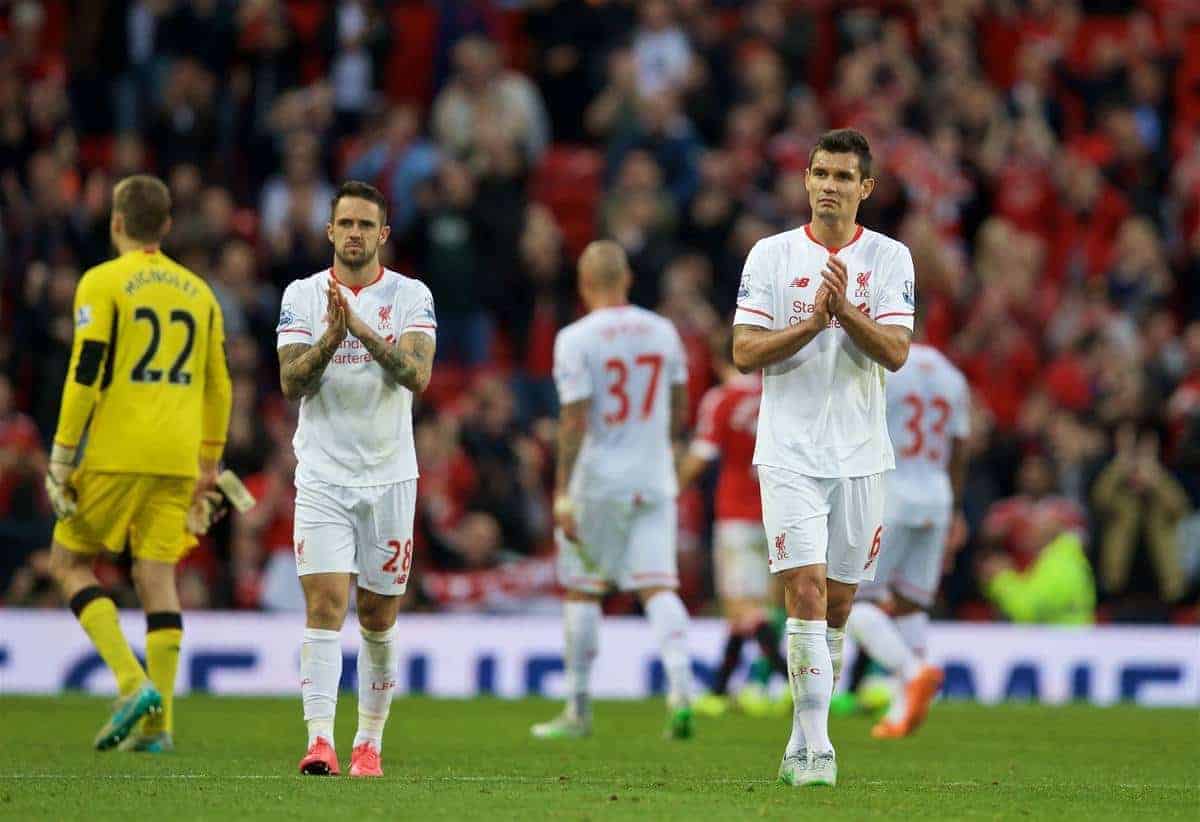 Liverpool have performed well for 45 minutes of the 450 played this season, writes Caislin Boyle after the miserable defeat to Man United.

Different time zone, same outcome – a second successive Liverpool defeat hurts just as much in Vietnam. As I sit typing this, I initially struggle to find the appropriate analytical angle, until I realise that there isn’t one, and that’s precisely the point. Liverpool were devoid of any of performance, and therefore there is very little to pick apart and dissect. That said, without analysis there would be no article so let’s proceed.

Brendan Rodgers made one enforced change for this fixture and teased fans by including Danny Ings, who it was hoped would act as a foil for Christian Benteke. Instead, Ings was hoisted out to the left wing, contributing minimally, forced to play more like a wing-back, and making way after 74 minutes.

It must also be said that making a single enforced change after the abject defeat to West Ham shows a blind faith that that performance did not warrant.

The first half barely merits mentioning, such was its tepid, dull nature. However, Liverpool even managed to look at sea against a United team whose focal point was a limited midfielder. The partnership of Lovren and Skrtel must make Sahko wonder what he has to do to start, and Lucas bustled around midfield committing his usual flurry of fouls.

Firmino, perhaps understandably, still looks unsettled in the league and in the lineup. Even the usually reliable Nathaniel Clyne and thus-far impressive Joe Gomez were far from their best.

The second period came to life courtesy of Daley Blind’s finish, after which Liverpool began to resemble an attacking outfit. Ings had a good opportunity clawed away by David De Gea, with Skrtel and Firmino also having chances.

The concern is that it took a United goal to ignite the attacking instincts within Liverpool that in the past formed the cornerstone of their play. One of Rodgers’ trump cards has always been that his teams will remain committed to swashbuckling, exciting football, come hell or high water. Based on the early games of this season, he no longer has this to rely on.

A needless penalty added comfort to United’s lead, with Benteke’s screamer a rare highlight. Ardent fans hoped the comeback was on, the cynics amongst us hesitant to do so. While Anthony Martial’s first contribution in English football may not have been expected, the result was.

Whether the loss was 2-1 or 3-1, the immediate and intense pressure on Rodgers is fair and justified, given his most recent summer spree. Significant outlay should equal progress, but it does not feel like Rodgers’ side has improved since their humbling at Stoke. The reality is that no real strides have been made, with two scarcely deserved wins against Stoke and Bournemouth fooling no one.

Defenders of Rodgers will point to the first half showing at Arsenal – Liverpool have performed well for 45 minutes of the 450 played this season. That is simply not good enough, and Rodgers must shoulder the blame.

Liverpool have one more point than at this stage last season. The statistics read that both teams had the same number of shots, with Liverpool managing one more on target. United shaded possession and the corners were even at four apiece.

The statistics also read that Rodgers has beaten United only once in his Liverpool career. It’s unclear how many more chances he will get to redress the balance.

Chelsea have started the season similarly inauspiciously, yet Jose Mourinho has shown he has the managerial wherewithal to drag his team from their malaise. Despite his love of the word, Rodgers is yet to show such character.