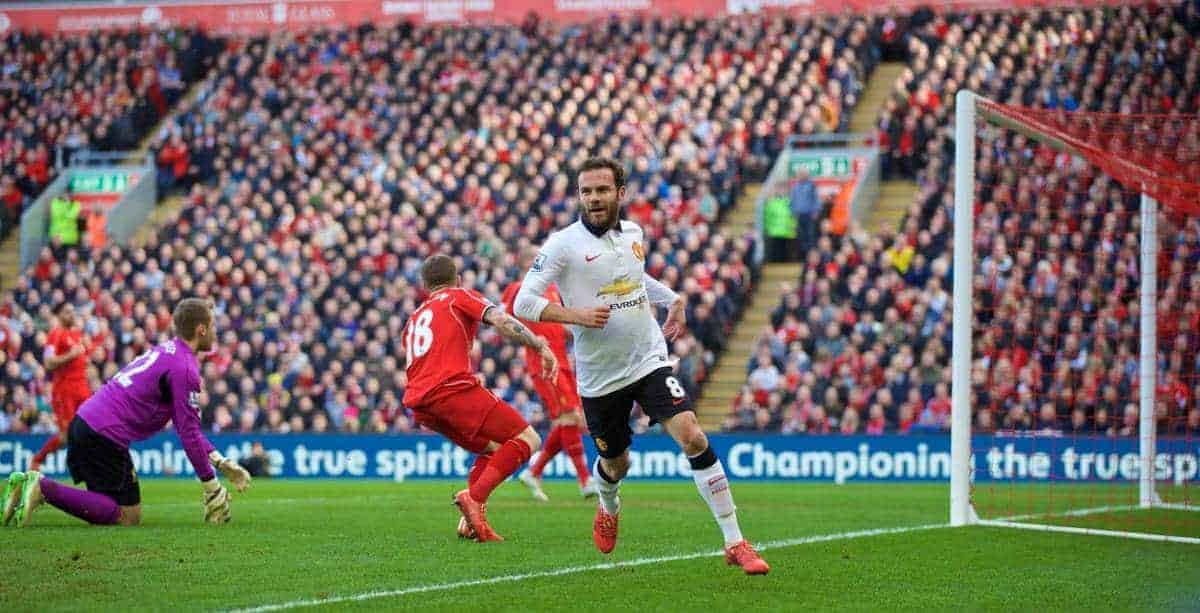 Liverpool must use last season’s crushing and derailing Anfield defeat to their arch-rivals as motivation to ensure a repeat does not materialise on Saturday, writes Ben Twelves. Last season’s Anfield grudge match came at a time when Liverpool were in resurgent form after a poor first half to the season.

A win would have moved Brendan Rodgers’ side into the top four positions as the business end of the season drew in and the confidence provided would have known no bounds ahead of the final eight games.

But instead of proving to be the day Liverpool demonstrated their top four credentials with a morale-boosting result, it was an afternoon that ended in a defeat that ultimately proved fatal for the Reds’ campaign.

That 2-1 reverse on a dreadful afternoon in March which saw the Reds’ 13-game unbeaten run come to an abrupt end, killed off all momentum, confidence and any hope that the season could end in relatively successful fashion with a top four finish and trophy win.

Complete capitulation followed the loss, with Rodgers’ side left deflated and bereft of belief, and a revived top four challenge was derailed as a result.

The impact of that defeat against Louis van Gaal’s men on the remainder of the season really was monumental.

On Saturday, the Reds cannot afford to allow the same to happen and last season’s brutal experience must serve as motivation to avoid what could be a disastrous repeat.

Returning to Merseyside with a second loss in as many games would leave Rodgers and his group under immense pressure, and a similar result as to that of March would leave big concerns over how the squad would respond again to a demoralising rival-clash defeat.

Saturday’s encounter may only be the fifth Premier League game of the new-born season and there would undoubtedly be time to put a bad result in Manchester right, but the fall-out and extra-intense scrutiny that would come with a negative score-line would see the Reds facing an uphill task for the season ahead already.

Rodgers’ men arrive at Old Trafford off the back of a dreadful performance and result against West Ham – the Reds must show their changed mentality and bounce back positively at the first attempt against van Gaal’s side.

It will be a task of greater difficulty with main-man Philippe Coutinho suspended following his dismissal against Slaven Bilic’s side – his absence is a huge blow and gets Rodgers’ preparations for a massive game off to a far from ideal start. But picking up a positive score – especially without key players available such as the Brazilian, Daniel Sturridge, and most likely captain Jordan Henderson – could provide the perfect platform to really progress in a season that, despite taking a heavy knock against the Hammers, started in encouraging fashion with cause for optimism.

Confidence levels that would be instilled from a positive result in Manchester throughout the squad with winnable fixtures against Norwich and Aston Villa to come at Anfield would be a massive boost, and show Rodgers and his squad really are up for the task that lies ahead.

It would also show that the Reds have learnt, improved and acted on the harsh lessons of last season.

With both sides having endured almost identical starts to the campaign with seven points on the board from a possible 12, Saturday’s clash is very much one that could go either way.

It’s a game that also has the potential to be an early season-definer for Brendan Rodgers and his new-look Reds.

This time, Liverpool must make sure that it proves to be a season maker, not breaker.