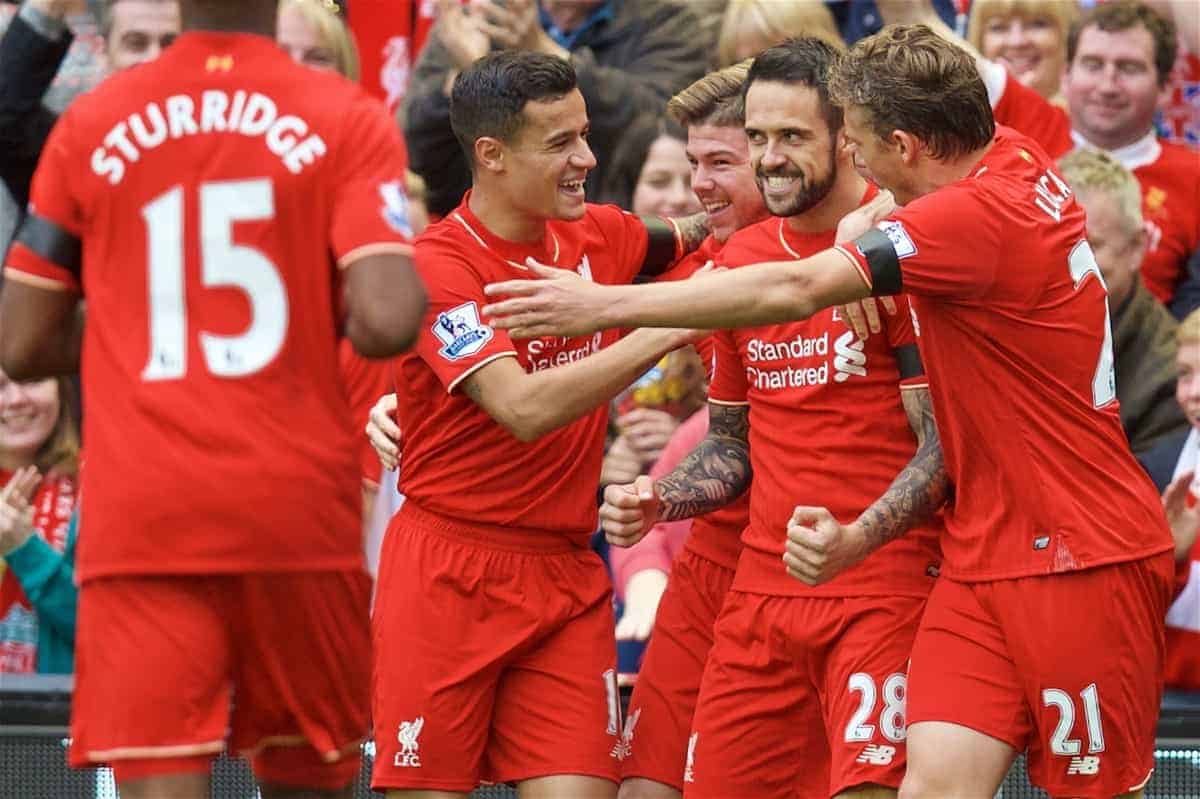 Liverpool return to Premier league action at Anfield on Saturday when they take on Aston Villa in a game of huge importance for Brendan Rodgers. We preview the clash and take a look at how the Reds could line up for the game.

After a dreadful League Cup performance and result in midweek, Brendan Rodgers and his struggling Reds host Tim Sherwood’s Villa for their third game in a week at Anfield.

Liverpool have won neither of the previous two clashes in L4 thus far, drawing with Norwich and suffering an embarrassing night against League Two Carlisle United last time out, and with pressure on Rodgers now at an all-time high, nothing but a win will do for the under-fire Northern Irishman in what is reported to be the first of three games he has to save his job.

Rodgers: "The pressure is huge but I embrace that challenge. I respect that we need to get results. One win and we're back around top 4."

It is now a woeful six games without a win in all competitions (penalty shoot-out’s aside) for Rodgers’ side and time is ticking against the Liverpool boss who must begin the start of a turnaround with immediate effect on Saturday, against a side unbeaten at Anfield since 2010 and who haven’t won in the league since the opening weekend of the season.

Rodgers is yet to register a win in a home fixture over the Villains, who have won on two of their last three visits to L4, and at a time when he is fighting for his job, the Ulsterman simply cannot afford for a similar outcome to materialise with a negative result doing nothing but increasing the likelihood of a departure in the very near future.

Injuries are beginning to pile up for Rodgers, who has lost Dejan Lovren for two months with ankle ligament damage and Roberto Firmino who may have cracked a bone in his back for a number of weeks.

The duo’s absence adds to that of Jon Flanagan, the much-missed Jordan Henderson, and Christian Benteke – who will miss the chance for a reunion against his old club with a hamstring problem which he is expected to be out for two-to-three weeks with.

The squad available to Rodgers is certainly lighter following the loss of four senior players in quick succession, but the Ulsterman could bring Joe Allen back into the Premier League fold after a tidy first game on return from injury in midweek.

Mamadou Sakho is likely to return to the starting side after sitting out the League Cup clash on Wednesday, with Lucas Leiva too likely to come back into his defensive midfield role, while Philippe Coutinho is set to resume his attacking midfield duties after being benched against the Cumbrians.

The Liverpool boss has confirmed Daniel Sturridge will return to the side after being rested in midweek, but Rodgers faces the decision of whether the 25-year-old leads the line with a supporting cast of Coutinho and Adam Lallana, or partners the impressive Danny Ings up front.

Having reverted to the shape for the last three consecutive games, Rodgers looks set once again to line his side up with a three man defensive line at Anfield, as he recalls some key players to the team.

With Ings in form and Sturridge set to return, the latter of those two options looks more likely, allowing for Coutinho to play in support of the strike-duo.

The rest of the side certainly picks itself in most positions.

Despite his shoot-out heroics, Adam Bogdan will drop back to the bench for Simon Mignolet, while Sakho looks nailed on to come back in to play alongside Emre Can and Martin Skrtel in defence.

With Nathaniel Clyne and Alberto Moreno the certain picks at wing-back again, Vice-captain James Milner is likely to be partnered by Lucas in central midfield, with the experienced duo operating behind the three man attack of Coutinho, Ings and Sturridge.

The changes of personnel to the team would see Liverpool line up looking like this on Saturday afternoon: While finishing and ruthlessness in front of goal is unquestionably a problem, so too remains creating clear cut chances for the Reds’ front-men to finish.

With that in mind and Liverpool’s main striker back, Rodgers could decide to opt for extra creativity to ensure Sturridge is provided with the chances to finish off, by keeping Lallana in the starting XI alongside Coutinho in attacking midfield.

That would see a slight switch of system with two ‘technicians’ behind Sturridge and with the rest of the side keeping the same look, Liverpool’s XI could look like this come 3pm kick-off time. Rodgers spoke pre-match of his desire to remain as long-term manager at Anfield – the only way he will make that happen is by winning games quickly and consistently. Saturday simply must be the first.