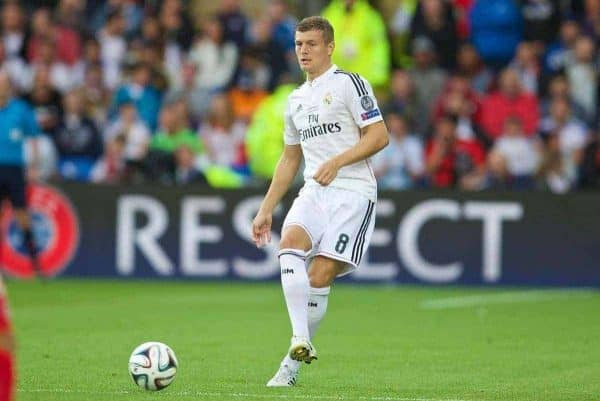 Steven Gerrard has revealed the role he played in Liverpool’s transfer activity, including a failed bid for Toni Kroos in 2014.

Liverpool failed in a bid to sign German playmaker Toni Kroos in 2014, before the midfielder joined Real Madrid.

That is according to Steven Gerrard, who has revealed the role he played in helping to secure Liverpool’s more ambitious transfer targets.

In another extract from his upcoming autobiography My Story, serialised in the Mail, he said “I had an unofficial role at the club, trying to persuade some great players to join Liverpool.”

Before the move for Kroos in 2014, Gerrard detailed how Liverpool pursued Brazilian winger Willian the previous summer.

“In 2013, the latest player in our sights was Willian, the Brazilian midfielder,” he said.

“I followed the usual routine when approaching a star player we wanted to sign.

“Instead of calling him directly I always sent a text. It seemed more respectful and allowed the player to read my message at a time when it suited him best. A cold call felt wrong.

“I slipped into the groove with Willian. I said hello and hoped he didn’t mind me contacting him directly.

“I stressed how much I admired him as a player and then, having mentioned that I knew Liverpool were speaking to his agent, I used the standard line: ‘If you need to chat or ask any questions I’m available at any time.’

Unfortunately, Willian’s reply was “‘I’m not sure Liverpool can give me the Champions League.'”

“We both admired Kroos immensely,” he said, noting Brendan Rodgers’ influence on the move.

“I knew Real Madrid were gearing up to make Bayern Munich an offer and so I felt a bit awkward when I texted Kroos.

“The German was on his way to winning the World Cup with his country and Real were the champions of Europe.

“But God loves a trier, and so I gave it a whirl.”

Kroos respectfully declined Gerrard and Liverpool’s offer, and Rodgers failed to add another midfielder to his ranks following the signing of Kroos’ compatriot, Emre Can.

Signing Kroos would have been a spectacular coup for Liverpool, with the former Bayern Munich man one of the best central midfielders in world football.

But his rejection, along with that of Willian, is a damning indicator of the club’s sway in the transfer market.

Now without their talisman, the sights may need to be lowered even further.