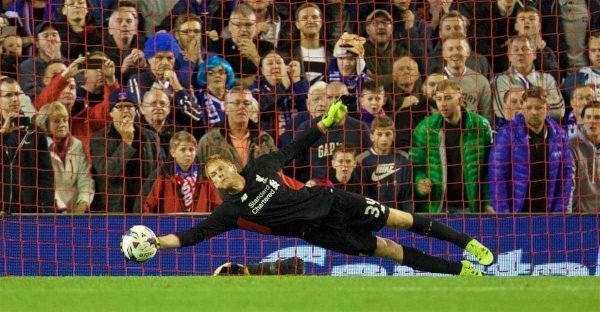 Following Liverpool’s penalty shootout triumph over Carlisle in the League Cup, we bring you the best of the fan reaction from the game.

Rarely has a victory been greeted with such half-hearted joy.

This was a night where even more faith was lost in Brendan Rodgers, as the Reds were taken to the brink of League Cup elimination by a League Two side.

The performance simply wasn’t good enough, with endless long shots and not enough creativity, and the only positive to take was the three penalty saves made by Adam Bogdan to secure victory.

Here is how social media reacted to the rather hollow win:

One goal in 120 minutes of football at home to the team who have conceded the most goals in League Two.

Struggling to think of the last time I was so underwhelmed by a victory. Have nothing good to say, so that’s me over and out.

AET #LFC 1-1 #CUFC: After 120 minutes we're heading to penalties. Liverpool with 47 shots but only one was converted. pic.twitter.com/vjiaErdY4T

Other than Danny Ings, this @LFC team is devoid of anyone who wants to grab the game by the scruff of the neck. Horribly anaemic.

Bogdan channeling his inner Dudek. A most memorable event.

Celebrating that? They should hang their heads in shame. Rodgers should be sacked tonight. Embarrassing.

What about Ed Sheeran between the sticks though, eh? Boy can save a penalty #Bogdan.

Though it should not have come to a shootout… #LFC

Winning Manager of the Year was the worst thing that ever happened to Rodgers. It made him think he can walk on water. He can't. #LFC.

Nothing whatsoever to be excited about. Rodgers still needs to go.

Tonight HAS to signal the end of Rodgers. Regardless of whether we go through or not. #LFC

A new manager to these players would be like an adrenaline shot.

Adam Bogdan saves final pen of 10 from Bastien Hery. Liverpool through 3-2 on pens.

I thought #LFC showed great Character tonight to play 120 mins of football and finally win on a Penalty Shootout ?