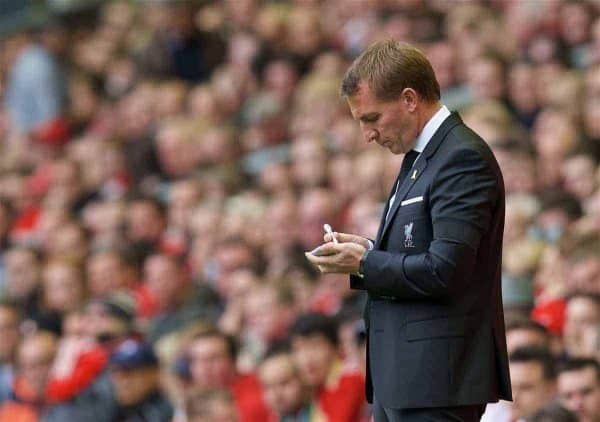 Liverpool manager Brendan Rodgers admits his side have to play with more bravery at home after another Anfield disappointment.

Despite Danny Ings‘ first goal for the club after coming on at half-time the Reds could not hang on to their advantage with Russell Martin equalising after a mistake by goalkeeper Simon Mignolet, as the Norwich man made a mockery of spending the morning with his wife who gave birth to their third child in Norfolk.

It was a second successive poor performance at home after the 3-0 defeat to West Ham and with this game signalling the start of four Anfield games in 11 days Rodgers knows they have to start making their home advantage count.

“We have got these four games here to get our performance level to where we want them to be,” he said.

“Anfield is a real special place to play. You have to have courage and bravery to play here.

“There is a great history but embrace it. You have to play positive football.

“There was a feeling of anxiety when I came in. We made it a fortress. Now we are having to build it again.

“I am disappointed and frustrated with the result but I thought the second half there were more signs of fluency and creativity.

“We were a bit static when we had the ball in decent positions, the movement in front of the ball wasn’t what we would like.

“Second half we freed ourselves up. Danny Ings came on and was outstanding, his ability running in behind was there to see.

“It was important to get the first goal, we did, but lost our concentration for their goal.

“We lost concentration and Russell Martin hooks it in so that shouldn’t happen.”

On the positive front Daniel Sturridge returned after more than five months out after a hip operation while the displays of Ings and wing-back Alberto Moreno, making his first start of the season, were encouraging.

Much has been pinned on the significance of Sturridge’s comeback but Rodgers cautioned expecting too much, too soon.

“He is a way off full fitness. His presence and stature will give us something. It is about building his fitness. There is no pressure on him to do that,” he added.

Norwich boss Alex Neil was happy with the result, which could have been even better had Mignolet not redeemed himself somewhat with a good save from Matt Jarvis.

“I am pleased. Not just with the result, I thought the performance was good,” he said.

“We were brave, tried to put our foot on the ball. You need to ride your luck and rely on your goalkeeper, who made some great saves but we could have nicked it at the end when Matt Jarvis had his chance.

“I thought we deserved a draw.”