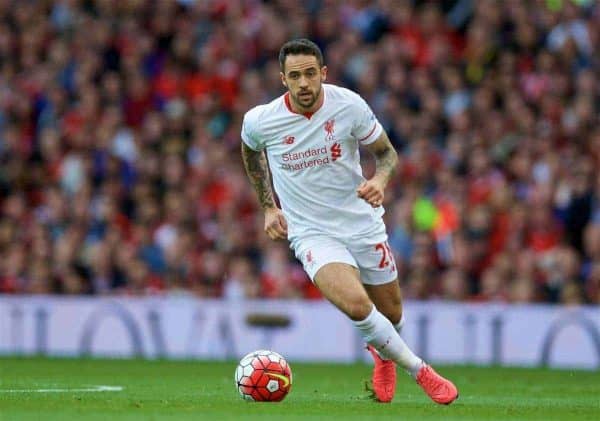 With the news that Danny Ings is set to miss up to six months with a ruptured knee cruciate, Liverpool supporters are “absolutely gutted.”

Ings had secured a dream move to Merseyside this summer and begun the season in red-hot form, including goals against Norwich City and Everton in the Premier League – as well as earning his first senior England cap on Monday night.

But after returning to Liverpool training under new manager Jurgen Klopp on Wednesday, the striker suffered a season-ending ACL injury.

This injury comes as a blow for Klopp, as he prepares for the start to his reign at Anfield.

Joe Gomez is also facing nine months on the sidelines after tearing his anterior cruciate ligament on international duty.

As for Gomez, awful news for Danny Ings. From senior international debut on Monday to season over on Thursday.

Really gutted about that. Such a likeable man.

Absolutely gutted for Danny Ings, he's been one of the only bright spots so far this season.

Absolutely devastating news with Danny Ings' injury. Would have been a key feature of Jurgen Klopp's high-intensity attacking line. #LFC

Oh man, this is savage! Was coming into form for #LFC and really would have suited support ST role under Klopp! https://t.co/1Ujtb2qIzy

Just realised. Ings was injured prior to those England matches and WOY still played him??!

Jurgen Klopp was excited by working with "young gun" Joe Gomez. And Danny Ings would've been perfect for his "emotional football"#LFC

One week of fun for Liverpool fans and the Gods are all like "Can't be having this – two cruciate ligament injuries, take that!" #cursed

#Ings and #Gomez out so quick succession. It's almost like it was a Football Manager bug. Horrible for both and #lfc

What's with all the knee ligament injuries these days? Swear they weren't always this common.

At this rate Klopp is going to have to dust his boots off! #LFC!

You can buy knee ligaments outside of the transfer window, right? #LFC

Klopp has brought the Dortmund injury curse with him #KloppOut

Ings and Gomez ruled out for the season in the same week! Welcome to English football Mr #Klopp #YNWA

.Don't worry @IngsDanny & @J_Gomez97, we will wait for you like a good wife waits for her husband.

Couldn't have happened to a nicer guy in Danny Ings as well ?

Sad news about Danny Ings. Awful injury and was just starting to find his stride for Liverpool. Early blow for Klopp.

Losing Ings and Gomez is unfortunate but neither are "crushing blows" for LFC or Klopp. Lets all relax shall we?

Absolutely horrible news about Danny Ings. Started really well at Liverpool, think he's a player Klopp will really like too. Gutted for him.

ALL THIS #KLOPPFORTHEKOP AND #THENORMALONE MERCHANDISE IS THE REASON INGS AND GOMEZ ARE OUT FOR THE SEASON. WE BROUGHT IT UPON OURSELVES.

Big chance for Divock Origi to step-up here, but we have to buy a new Striker in Jan now.