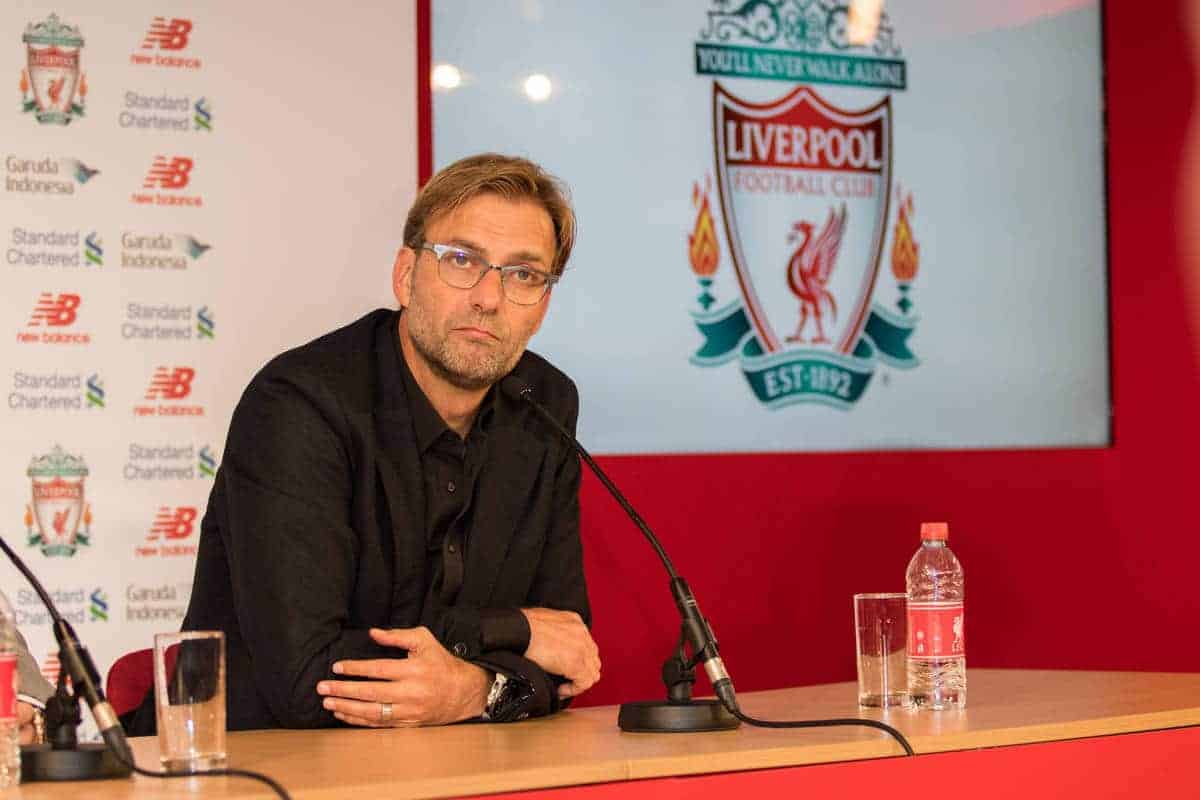 We take a look at the first five matches Jurgen Klopp faces as Reds boss, as the new manager looks to make a positive start to his Anfield tenure.

Klopp arrives to take charge of the Reds with his new side about to start their toughest period of the season.

Challenging Premier League fixtures alongside Europa League and League Cup clashes ensure the 48-year-old endures a tricky start to life as Liverpool boss, as he attempts to kick-start the struggling Reds’ season.

The charismatic manager will want to hit the ground running to make an immediate impression at Anfield, and we take a look at the first five games he presides over in which to make that happen.

The Reds have a good recent record at White Hart Lane winning convincingly – 3-0 and 5-0 – on the last two visits, and Klopp will be looking to continue the good recent run in his first game in charge.

The first Premier League action the German faces comes against a Spurs side suffering from inconsistency with performances and results – typified by their sluggish 2-2 draw at Swansea only a week after smashing league leaders and title favourites, Man City, 4-1 at White Hart Lane.

It’s the very unpredictability of Mauricio Pochettino’s side that makes them a tricky prospect, and Klopp’s Reds will have to become the first team to win at White Hart Lane this season if the new manager wants to begin with the perfect start.

It’s a place that sees very little middle ground in fixtures between the two sides – with only one draw in the last decade of games in London – and Klopp will hope his debut clash falls in his favour.

Taking charge of his first game at what will be a packed Anfield on a European night promises to be a special occasion for the German.

But following two draws in the first two Europa games, it’s an evening of real importance too, with the Reds needing a first victory of the group stage to keep themselves within touching distance of top spot.

Bordeaux and Sion – despite claiming draws against Brendan Rodgers’ side – showed they are far from unbeatable opposition, and Klopp will be looking to make it third time lucky to kick-start the European campaign against the Russians – who sit bottom of Group B with only a point to their name.

Being a European night will make for a great occasion, but with it in Europe’s secondary competition, it will also provide Klopp with the thirst for more – but on the Champions League stage instead.

Southampton’s arrival at Anfield promises to be another difficult early game for the 48-year-old, with the Saints having caused numerous problems on their last few visits.

Ronald Koeman’s men will provide a stern test in only the second Premier League clash under Klopp, with the Dutch manager having assembled an organised and dangerous outfit at St Marys.

After a mixed start to the season the south-coast side have settled well, and Klopp will come up against a team who pose a real threat on the road – shown with their 3-1 away win at Stamford Bridge last time out – and arrive at Anfield unbeaten on their travels.

With the game set to be the second in three days against beatable opposition, it’s a real chance for the German to use Anfield to his advantage and spark an early upturn in form at home where Liverpool have struggled over the last season.

Liverpool have recorded the most League Cup wins in the English game, and the fact the trophy presents an early chance for silverware adds an extra incentive for Klopp.

The Reds endured one of their most embarrassing nights in recent times in the last round of the competition – scraping past League Two side Carlisle only on penalties with an XI that wouldn’t have looked out of place in a Premier League clash.

It was yet another cup fixture the Reds made a hash of over recent seasons, putting themselves under unnecessary pressure as a result of extra-time and replays, and with the league and Europe of paramount importance, Klopp will want to avoid following this trend at all costs.

He has the chance to begin a new era against Bournemouth for the third home game in a row, and he will undoubtedly look to see the Cherries off with more ease than when the sides met in August – with a trip to Stamford Bridge just days later.

The first big Premier League test for the new boss comes in the form of a trip to Stamford Bridge.

Jose Mourinho’s men are far from invincible – they’ve lost four of their first eight league games – and have proven that when exposed and attacked with pace and energy , they can certainly be breached.

But a trip to Stamford Bridge is never easy, and it won’t be again, especially as Mourinho’s side have the chance to get back on track against Aston Villa and West Ham – as well as in cup matches against Stoke and Dynamo Kiev – before Klopp’s side arrive.

Rodgers never recorded a win against the west London outfit in his time at Anfield in any competition, and Klopp will have the chance to better that instantly at a ground where the Reds haven’t tasted victory since 2011.

The German has previous against Mourinho, overcoming his Real Madrid side in the Champions League semi-finals in 2013.

A stunning 4-1 win at home proved to be enough to reach the final despite a 2-0 second-leg loss in the Santiago Bernabeu – and he arrives with confidence and know-how for the big occasion – something Liverpool have desperately lacked for too long.

Though the opening five matches of his Anfield career certainly pose a tough challenge, it also provides the opportunity for Klopp to make an early mark for the season ahead.

If he can get off to a positive start, who knows what can happen.