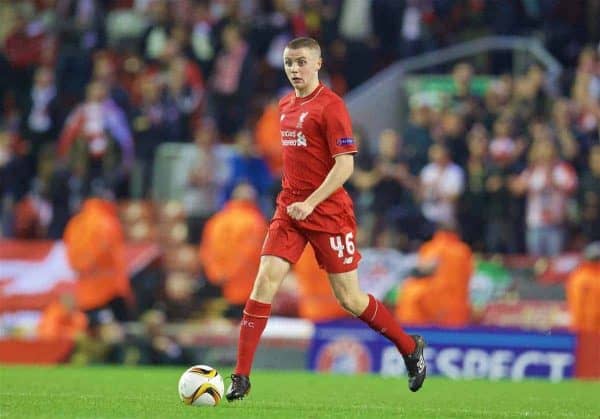 Jordan Rossiter is the latest player to join Liverpool’s growing injury list, after suffering a knock during England under-19s duty.

The daily injury issues for Liverpool manager Jurgen Klopp continued on Friday, as it was announced that academy midfielder Rossiter had suffered a hamstring injury on international duty.

The 18-year-old took part in the England under-19s’ clashes with Macedonia, Finland and Italy, but will now miss the Reds’ visit to White Hart Lane to take on Tottenham Hotspur on Saturday.

According to Paul Joyce of the Express, Liverpool are “furious” with the FA as a result.

“Liverpool believe the injury has been caused by playing too many games in such a short space of time and it follows the setback suffered by Joe Gomez while playing for the U21s on Tuesday,” Joyce writes.

Rossiter played 90 minutes in each of England’s three outings during the international break, with 270 minutes of action in five days.

The Liverpool-born talent joins Gomez and Danny Ings on Liverpool’s injury list this week, with both sustaining season-ending ACL injuries on duty with England’s under-21s and senior sides respectively.

Losing Rossiter is a minor blow to Klopp, but one that is magnified by the severity of his team-mates’ absences.

Jordan Henderson, Christian Benteke, Roberto Firmino and Jon Flanagan all remain in the treatment room, leaving the German with a 19-strong senior squad for Saturday’s clash.

Supporters will be relieved to hear, however, that star striker Daniel Sturridge is fit to take part against Spurs.

The 26-year-old was rumoured to have suffered an setback, after successfully returning to fitness this season following a long-term layoff, but the Liverpool Echo‘s James Pearce took to Twitter to refute these claims.

“Sturridge is travelling with the #LFC squad down to London this afternoon,” he confirmed.

“Not aware of any fresh injury concerns for the striker.”

With Ings and Benteke injured, Sturridge and 20-year-old Belgian striker Divock Origi represent Klopp’s only recognised centre-forward options, but the former Borussia Dortmund manager is confident that will be enough.

“In this moment – for the next game – we have Daniel [Sturridge] for the position and we have Origi,” he told reporters on Thursday.

He will no doubt be disappointed, however, that his game as Liverpool manager has been hampered by so many injuries.