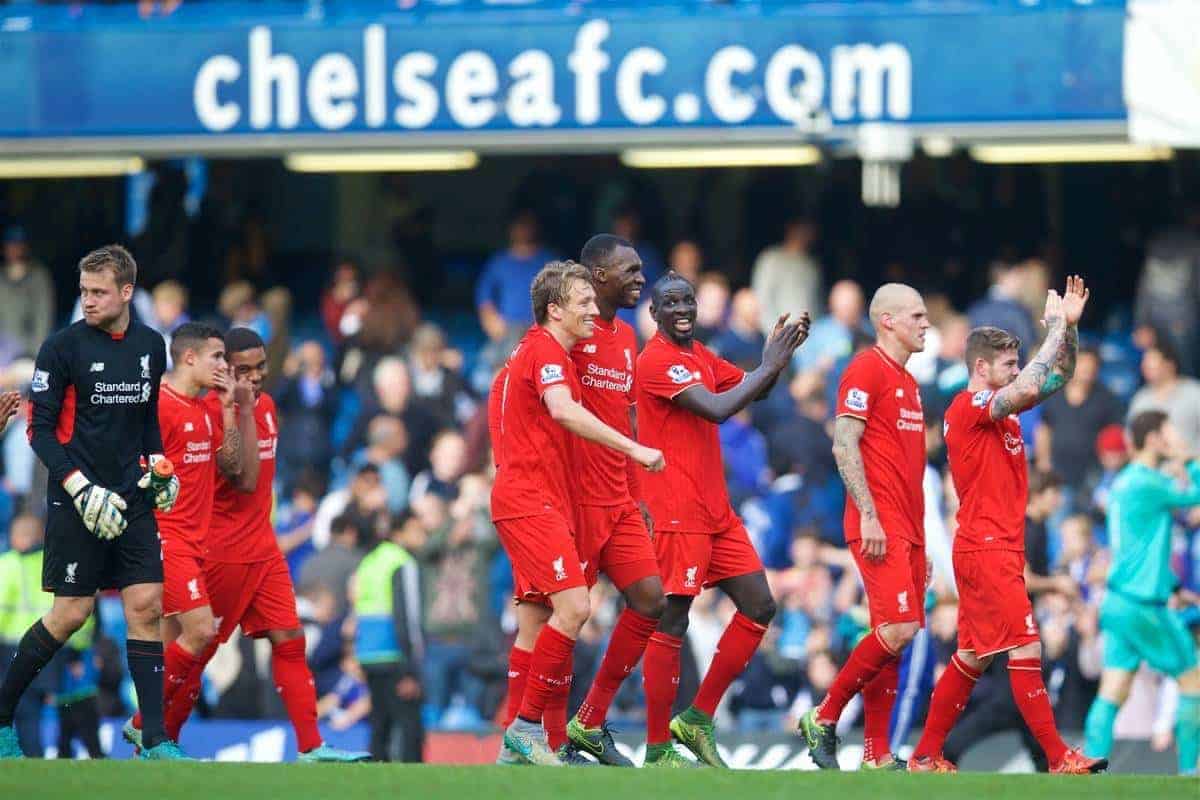 Liverpool picked up a first Premier League win under Jurgen Klopp as they took over Stamford Bridge and came from behind to record an impressive 3-1 victory.

The Reds made a poor start to the game as Ramires was allowed to ghost into the box unchallenged and open the scoring after just four minutes, but Klopp’s men quickly grew into the match and dominated the remainder of the first half. Philippe Coutinho got Liverpool back on terms just before half time with a sumptuous curling finish from the edge of the box.

Coutinho it was again who put the Reds ahead in the seond half, turning defenders inside out before his shot clipped off John Terry and inside the near post, before Christian Benteke wrapped up the win in the final minutes.

Here are six talking points from the match as the Reds recorded a first league win in more than a month.

Seconds after Chelsea scored their opener, the cameras cut to Jurgen Klopp on the touchline. The Liverpool manager was obviously irked with the manner of conceding the goal, but his reaction was clear: heads up, he told the players, and get on with the game. He would have reminded the players of the same words he gave the press following conceding a late goal to Southampton a week ago: conceding is not the end of the world, and doesn’t need to be treated as such.

As the team grew in stature in the match, Klopp encouraged further growth; the substitution of Christian Benteke for James Milner meant a tactical switch, but also an offensive one. There was a focal point to the attack to be more physical and direct, but also an insinuation to both teams that Liverpool, not Chelsea, believed this match was there to be won.

Once the Reds were ahead it would have been easy to sit Jordon Ibe back down and bring on Joe Allen—and surely Allen for Lucas was one most fans were expecting to see after a potential second yellow card offence—but Klopp’s outlook remained one which wanted to test Chelsea, pressurise their defence and keep the outlets in place for his own side.

Not until injury time, bringing on Dejan Lovren to sit in front of the defence, did Klopp even remotely consider withdrawing his troops from the line of attack—and it paid huge dividends in a huge game.

A favourite descriptive term of the former Liverpool manager was all too infrequently actually on show by his charges, but Liverpool certainly showed that fabled character on Saturday.

For the first time since Leicester City in December of last year, the Reds were able to come from behind and go on to take the three points in a match, with that aforementioned reaction to conceding a goal quickly put behind them by the players. They reacted well, continued with their game plan and reaped the rewards.

In the same way that the destruction of Spurs under Brendan Rodgers may have been the moment when that group of players realised what the boss wanted would actually work, so to can this performance and comeback win be the one which sees the current crop take Klopp’s words to heart.

When Brendan Rodgers signed the former Aston Villa man there was a lot of debate about whether he was an ideal forward for the ball-retention oriented system expected to be seen, but there was little evidence of anything resembling that approach from the Reds and Benteke was injured anyway early in the season.

Under Klopp so far the No. 9 has been an important factor in recent results; goals off the bench have been pivotal against Saints and now Chelsea, while he was also involved in the build-up to Coutinho’s second against the blues as he cushioned down a diagonal pass from Mamadou Sakho. Without Benteke in place as the striker at that point, the particular outlet Sakho chose probably wasn’t on offer.

Benteke might not be the most skilful forward the Reds have on their books, but he is quickly fitting in as the best reference point of attack—especially in Sturridge’s continued absence—and there can be no arguments that his introduction was the catalyst for Liverpool to move from merely being the better side on the day, to actually going on and taking the three points.

What matters most, in-game consistency or end product?

Liverpool’s No. 10 had been extremely hit-and-miss in the past few matches, seeing easy passes go astray, attempted dribbles and shots not coming off as he wanted and plenty of groans from the crowd aimed his way as possession was lost again. He was clearly frustrated with himself and the first half at Stamford Bridge largely went the same way as his passing radar was wildly off-kilter at times.

Then he scored…and everything seemed to change.

Able to drive into space in the second half as Chelsea‘s midfield line was altered a little, Coutinho once again looked comfortable turning players, running at defenders and linking play neatly; he and Roberto Firmino both exchanged a few neat phases of play and, of course, there was the link-up with Benteke.

Coutinho is still a few gears away from his absolute best and a single improved 45-minutes doesn’t make for a true return to form, but does that matter when he comes up with the goals to seal the win? The second half at Stamford Bridge could turn out to be a momentous turning point for Coutinho’s season, as well as Liverpool’s overall.

63 minutes is how long Liverpool’s vice captain spent on the pitch at Stamford Bridge, and for most of it he was extremely unimpressive. A good delivery toward the end of the first half from the right side is about as good as it got for James Milner, who was in large part culpable for Chelsea‘s opener.

Milner missed his tackle, a very poor attempt, on Cesar Azpilicueta down the flank and then barely extended himself to recover position. With no pressure on the home team’s left-back, he was able to pick out a cross for Ramires to head in on the run. Thereafter he did aid challenges and attempted overloads in the centre and down the right channel, but in terms of his work on the ball it was a pretty horrendous afternoon’s work again from the former Manchester City man.

Jordan Henderson‘s return draws ever closer and, in the starting system, it looks an obvious and necessary switch to simply replace captain for vice. Of course, the overriding expectation is that Liverpool eventually move away from the 4-3-2-1, with different stages of the last three matches all seeing the team play an altered midfield formation.

Milner has won few admirers so far this season and his position must be the one most under threat, both from returning players and the January transfer window.