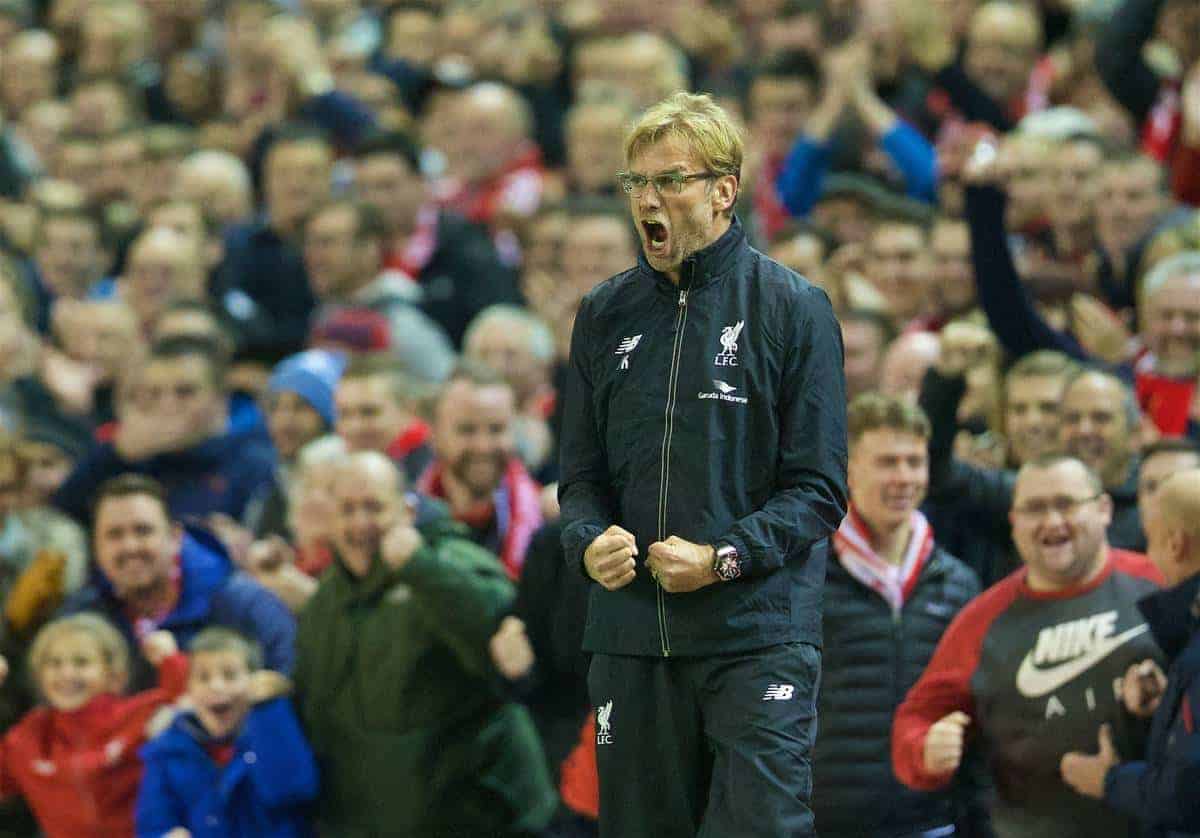 The new Liverpool boss is slowly beginning to eradicate some of the mistakes made under Brendan Rodgers, writes Andrew Ronan after Klopp’s first win against Bournemouth.

By the end of Brendan Rodgers’ time at Anfield, the lack of confidence running through his Liverpool squad was obvious. After four games under Jurgen Klopp, the extent of that lack of self belief is all too apparent.

His players have almost stumbled through the first four games of his reign – with Klopp doing his best to drag them to a result. It’s a testament to how good of a man-manager he is that Liverpool haven’t lost any of their last four games. His exuberant personality nearly makes him a twelfth man at times; his positivity is rubbing off on his players just enough so that they don’t lose.

Under Rodgers, Liverpool always seemed to be going through some sort of a transitional period, and wins which should have been deemed routine were talked up as a sign that things were turning for the better – “that’s a game we would have lost last season”. Klopp, though, deserves some credit; simply because, under Rodgers, Liverpool wouldn’t have gone undefeated in the last four games.

The fear which gripped Rodgers’ players in the dying stages of his reign would have completely engulfed the squad by now if he were still in charge, meaning Liverpool more than likely would be out of the League Cup and in a difficult situation in their Europa League group.

Instead they march on in the League Cup and have a very good chance of making it out of their Europa League group. If Klopp can somehow manage to find a way to convince his players that scoring more than one goal a game is actually helpful, a run of good league results beckons.

That’s the main sticking point at the moment, though – goals. Or lack of. No matter how much they huff and puff, Liverpool don’t look like they’re going to blow any team away at the moment. The situation, of course, hasn’t been helped by the absences of Daniel Sturridge and Christian Benteke.

Sturridge is cursed when it comes to injuries, we all know that by now, and someone should remind Sky Sports of that fact the next time one of their cameras zooms in on him in his usual seat in his Anfield corporate box. Benteke, though, is worryingly picking up the annoying, niggly injuries which Sturridge has almost trademarked.

How it will pan out with those two for the rest of the season is anyone’s guess. There’s nothing Klopp can do about their injuries at the moment, though. What he can do, however, is simplify his attacking options and find a way to score goals.

One of the criticisms of this current Liverpool team is that there are too many attacking players who are in the team to do the same job. It stems from Rodgers obsession with ‘technical’ players. Players such as Coutinho, Lallana and Firmino share the same mentality when they get the ball. They want to pick out intricate passes and unlock defences, and it can lead to a midfield which is congested and starved of width.

Against Bournemouth, Klopp opted for Jordon Ibe on the right side of midfield and his natural tendency to stay wide and continually take on his man offered a refreshing – but simple – alternative. It was simple because he played the role of a winger perfectly. These days, wingers at Anfield are as rare as an Everton win there, but maybe it’s something that Klopp should stick to in future.

If Klopp gives Ibe a decent run of games on the right channel, he can afford to move Firmino or Lallana out left and allow them to cut infield. Alberto Moreno’s enthusiasm in getting forward will maintain width anytime Firmino or Lallana cut inside. Moving one of them out left will free up more space for Coutinho to do his business in the hole behind the striker.

If Klopp is going to persist with Divock Origi whenever Sturridge and Benteke are injured, the young Belgian could do with Coutinho staying close to him. Origi is increasingly looking lost in games and he clearly doesn’t yet have the presence to operate in such an isolated role. The lone striker role can be an unforgiving one, and even a man of Benteke’s stature could do with Coutinho helping him out when he’s fit again.

Another criticism of this team is that there are too many pointless passes. Too many balls go sideways instead of forward, and not enough players are willing to take responsibility on the ball and try something inventive. Again, it goes back to Rodgers. He began to persist with three holding midfielders – even in home games.

That many defence-minded players in your own half doesn’t encourage adventurous football. The habit of fifty passes in the Liverpool half before an attack begun eventually rubbed off on the whole team. It’s still evident, and it may take more time before Klopp eradicates it.

Klopp will definitely have to repair the damage caused during Rodgers’ tenure before he can fully stamp his own brand of football on this team. He hasn’t worked the miracles that many expected of him when he arrived at Anfield, but his drive and force of personality are keeping heads above water for now. If he can continue to slowly build confidence those routine wins will become the norm again.