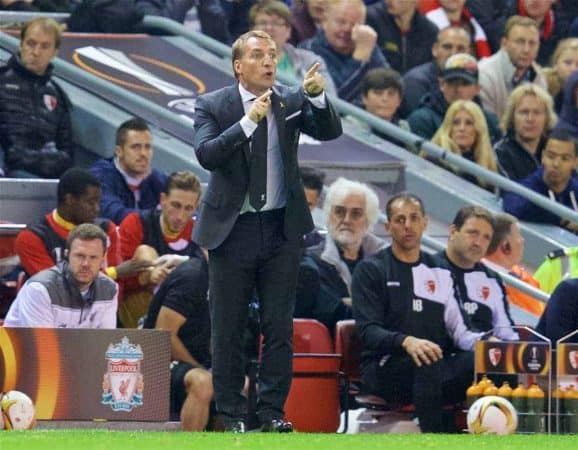 Liverpool could only draw 1-1 with FC Sion at Anfield on Thursday evening, and we bring you the best newspaper reaction from the game.

It was far from the ideal preparation for Sunday’s 225th Merseyside derby, as the Reds once again failed to overcome relatively weak opposition at home.

Adam Lallana‘s early strike looked to have sent Brendan Rodgers’ side on their way to a routine victory, but Ebenezer Assifuah levelled before half-time.

It was yet another game in which Rodgers failed to cover himself in glory, and he will know that defeat at Goodison Park at the weekend could well be fatal.

Here is how the morning newspapers reacted to the Sion draw:

James Pearce of the Liverpool Echo was left frustrated by the performance, especially as Liverpool didn’t build upon their win over Aston Villa last weekend:

So much for that turning point.

Having taken a step forward by ending their Premier League slump with victory over Aston Villa, Liverpool FC stumbled alarmingly in Europe on another desperate night at Anfield.

It was hard to know which was the most damning assessment of the Reds’ lifeless and disjointed display against Swiss minnows FC Sion.

Was it the fact that thousands of disillusioned supporters had long since given up and headed for home prior to Slovenian referee Slavko Vincic putting Anfield out of its collective misery?

Or was it the crescendo of boos which rung around the stadium at the final whistle from those who had decided to stick it out to the bitter end?

Either way, if beating Villa provided some cherished breathing space for manager Brendan Rodgers, here was a reminder about the unrest and frustration which continues to surround his stuttering Anfield reign.

The Guardian‘s Andy Hunter bemoaned the Reds’ finishing, and was another to highlight the resounding boos at the full-time:

Once again the Kop delivered a more emphatic finish than a Liverpool player. Boos greeted the final whistle for the third time in four matches at Anfield after a persistent flaw cost Brendan Rodgers’ team against FC Sion. The Liverpool manager offered several valid reasons for Premier League mediocrity in Europe before kick-off but only one explained a point against poor Swiss opponents: their lack of quality in front of goal.

Rodgers selected an under-strength team with Sunday’s derby at Everton in mind and Anfield was left predictably underwhelmed by a second 1-1 draw in Group B. Liverpool had the luxury of an early lead through Adam Lallana, who had chances for a second along with Danny Ings and particularly Divock Origi. All went begging and another defensive lapse presented a Sion team high on commitment but low on quality with the chance they needed to top the group.

Chris Bascombe of the Telegraph focussed on how easy Anfield is for opponents to play at now, and also believes Liverpool’s reliance on Daniel Sturridge is worrying:

Anfield was once acclaimed as a bastion of invincibility. Now it is becoming one of the most hospitable tourist venues, especially for overseas visitors.

After Swiss side Basel ended the club’s involvement in last season’s Champions League, the compatriots Sion made a dent in this year’s Europa League ambitions with a draw courtesy of the customary gift from Liverpool’s defence.

Sion were branded ‘pathetic’ and ‘embarrassing’ by their own chairman after a domestic defeat last weekend. Liverpool’s inability to overcome such average opposition has become a habitual. Few will doubt it was a game they should have won given how much they created, but lack of finishing prowess is no excuse. There has been far too much invested in this side for it to look so bereft of class in attack when one player – Daniel Sturridge – is missing. The England striker was rested for the Merseyside derby and Liverpool’s cutting edge took the night off with him.

In his ESPN player ratings, David Usher had kind words for the Reds’ central midfield pairing of Joe Allen and Jordan Rossiter, but was critical of the out-of-form Jordon Ibe:

Allen- Had the occasional sloppy moment but also showed plenty of quality, not least with a brilliant reverse pass to send Divock Origi clear, only for the Belgian to squander the opening by delaying his shot. Repeated the feat after the break when he sent Origi scampering through once more but again the finish was lacking. Probably Liverpool’s best performer.

Rossiter- Another promising performance from the 18-year-old. Kept things simple for the most part but his passing was accurate and he rarely gave the ball away. Covered a lot of ground and was always making himself available for a pass. He’s developing nicely and was one of the few positives to come out of another disappointing Liverpool result.

Ibe- It’s been a difficult start to the season for the teenager whose form has deserted him. Didn’t play well again, but being asked to play wing-back does him no favours. Struggled on the left in the first half, but worryingly for Kopites, he fared even worse after switching to his preferred flank following (Nathaniel) Clyne’s substitution.

Simon Highes of the Independent was, like many, unimpressed with the performance, and feels Everton have very little to fear on Sunday:

Brendan Rodgers should have known only a convincing victory over opposition which last season finished fourth from bottom in a Swiss Super League that in reality is anything but, would be sufficient to prevent another dissection of his management before Sunday’s Merseyside derby.

He might point towards the likelihood that four and not all of his starting XI here will begin at Goodison Park. Yet this was another dispiriting result for Liverpool, one which felt inevitable from the moment Sion’s equaliser crept in with 73 minutes left to play.

The reality of how bad Liverpool were was revealed by the circumstantial context of the team they were facing.

Graeme Jones, Everton’s assistant manager, watching on behalf of his club ahead of Sunday’s lunchtime encounter across Stanley Park, sat in the directors’ box until he had seen enough, leaving with five minutes to go.

With Liverpool’s faltering like this and the mood at Anfield reflected by a boom of boos at the end, there is unlikely to be many points of concern raised in his report.