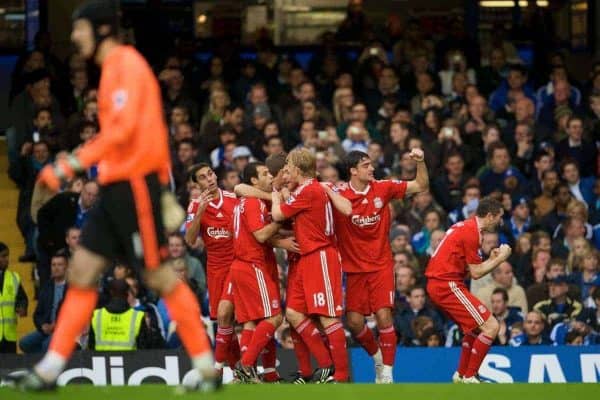 Ahead of Liverpool’s trip to Chelsea on Saturday lunchtime, we select the Reds’ five best ever league wins at Stamford Bridge.

Jurgen Klopp takes his side to west London on Saturday knowing that a victory would be a huge boost to Liverpool’s top four chances.

A win would also keep the pressure on Jose Mourinho, with reports going so far as suggesting defeat for the Blues could see the 52-year-old sacked.

The Liverpool-Chelsea rivalry has become more and more fearsome in recent times, but there have been some memorable clashes throughout history.

Here are the Reds’ five greatest ever victories at Stamford Bridge.

Liverpool’s most recent Premier League win at Chelsea came back in 2011, with a dramatic ending provided by an unlikely hero.

Kenny Dalglish‘s side took a deserved first-half lead, with the popular Maxi Rodriguez finishing off a slick move in front of the ecstatic away supporters.

Daniel Sturridge, who would become a Reds player just over a year later, equalised 10 minutes into the second-half, but the game had a late twist.

Glen Johnson, much-maligned during his time on Merseyside, scored a terrific solo against his former club, weaving past Ashley Cole and finishing clinically past Cech.

There were just three minutes left on the clock when the Englishman found the net, and Liverpool saw out the win.

Chelsea had a staggering home record when Liverpool visited Stamford Bridge in October 2008, with the Blues undefeated on their own patch in 86 league matches.

Rafa Benitez’s side were arguably the Reds’ best team of the last 25 years, however, and they produced a magnificent team performance to stun the hosts.

The game’s only goal came just 10 minutes into proceedings, as Xabi Alonso’s shot deflected off Jose Bosingwa and past Cech.

From that point on, Liverpool defended resolutely and never really looked like giving their lead away. Jamie Carragher, in particular, was outstanding.

Alonso hit the post with a second-half free-kick, but it had no bearing on the result, as the Merseysiders clinched a famous victory.

When Gerard Houllier took his Liverpool team to Stamford Bridge in January 2004, the Reds had never won there in the 11 and a half years since the Premier League‘s inception.

They ended that hoodoo in gritty style that night, however, and did it without inspirational captain Steven Gerrard and star striker Michael Owen.

Liverpool broke the deadlock after 32 minutes. Terrific link-up play between Emile Heskey and Bruno Cheyrou eventually saw the Englishman produce a dangerous cross into the penalty area, and the Frenchman finished emphatically.

Cheyrou had a very disappointing time at Anfield, having needlessly been hailed as the “new Zidane” by Houllier, but this was a rare moment of glory for him.

El Hadji Diouf was sent-off late in the day, and the injured Jerzy Dudek had to be replaced by debutant Patrice Luzi, but the visitors held on.

Dalglish’s team of the mid to late 1980s were fabulous, and their demolition of Chelsea back in December 1989 was one of the standout victories of yet another memorable season.

Gordon Durie did reply soon after for the Blues with a brilliant free-kick, but Ray Houghton’s clinical effort made it 3-1 before half-time.

Jan Molby may have missed a rare penalty after the break, but Steve McMahon and Rush added further goals to humiliate Chelsea. Kerry Dixon scored a late consolation.

The Reds clinched the First Division title that season, and it remains the last time they were champions of England.

Liverpool knew that victory at Chelsea in May 1986 would win them the title, but Merseyside rivals Everton were hot on their heels.

A tense afternoon in west London was settled by an icon of Liverpool Football Club.

Midway through the first-half, Dalglish was found inside the area by Jim Beglin, and the player-manager finished brilliantly on the volley to send the travelling fans wild.

It was one of the great moments in Liverpool’s history, and perfectly illustrated why ‘King ‘Kenny’ is regarded by many as the greatest player ever to represent the club.

The Reds held onto their lead, and the 1-0 win secured yet another trophy in what was a glorious period of dominance.