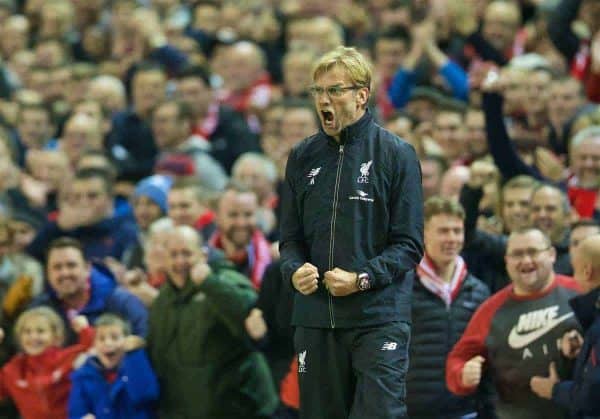 It’s the morning after Liverpool’s 1-0 League Cup triumph over Bournemouth, and we round-up the best newspaper reaction from Anfield.

Jurgen Klopp has his first win as Reds manager, following consecutive draws against Tottenham, Rubin Kazan and Southampton to start his reign.

Nathaniel Clyne‘s close-range effort in the first-half won it for the hosts, and it was a good performance on the whole.

Roberto Firmino shone in what was a Man of the Match display from the Brazilian, while Jordon Ibe impressed for the first time this season.

Connor Randall did well at right-back on his first appearance for Liverpool, while full debutants Cameron Brannagan and Joao Teixeira will also feel pleased with their efforts.

Chelsea are up next in the Premier League for Klopp and his team, with the Reds travelling to Stamford Bridge for a crucial Saturday lunchtime showdown.

Here is how the morning newspapers reacted to Liverpool’s victory over Bournemouth.

Andy Hunter of the Guardian felt victory was an important mental barrier for the Reds to overcome:

Like a Merseyside police officer seeking a lost soul inside Anfield, Jürgen Klopp has endured a frustrating search for his first win as Liverpool manager. It arrived at the fourth attempt as Nathaniel Clyne’s early goal earned the eight-times winners a place in the quarter-finals of the Capital One Cup at the expense of Bournemouth. “It feels much better than a draw,” the relieved Liverpool manager admitted.

There were hugs all round on the final whistle as Klopp celebrated his maiden Liverpool victory with every member of his backroom team, his substitutes and a few supporters near the dugout. It was a scoreline rather than a performance to savour, and a release after beginning his Anfield reign with three consecutive draws.

The Liverpool Echo‘s James Pearce focussed on the brilliant performance of Firmino, who finally showed supporters why he cost Liverpool £29million in the summer:

There was a stack of positives for Kopites to cling to.

Not least the man of the match performance from Roberto Firmino, who was left in no doubt about Anfield’s glowing assessment when he was substituted late on.

The Brazil international has endured a painfully slow start to his Reds career following his £29million move from Hoffenheim with injuries hampering his progress. But on his first start under Klopp he shone in the No 10 role behind Divock Origi.

Firmino was at the heart of everything that was best about Liverpool all night with his clever movement and eye for a pass. All that was lacking from him was the finish.

This was the gifted playmaker who had lit up the Bundesliga in recent years.

Chris Bascombe of the Telegraph was another who gushed over the 24-year-old’s eye-catching display:

Of longer-term significance was the manner in which a South American so beautifully choreographed the performance – which has been the way in happier times in this stadium in recent years.

While Philippe Coutinho was preserved on the bench, this was the night Roberto Firmino arrived at his new club. The Brazilian has been seen rarely since his expensive summer move from Hoffenheim. Partly that was due to injury, but there were also suspicions Rodgers was not so enamoured by the signing.

No matter, Firmino repaid the first chunk of his £29 million fee with a performance that earned a standing ovation when he was substituted four minutes from the end. He also received the now customary hug from the manager. The Liverpool players may need tougher shoulder pads for those days they’re on form.

Paul Joyce of the Express lauded Teixeira’s impact on the night:

If, as Klopp insists, he is not swayed by reputation then another full debutant, Teixeira, will have boosted his cause.

The Portuguese starlet, 22, appeared as a substitute against Fulham in February 2014 when a title challenge was in its formative stages, but suffered a broken leg while on loan at Brighton last term and was considered by Bournemouth in the summer.

He was one embraced by Klopp at the end and deserved his moment having been instrumental in what proved the winning goal.

Finally, the Mirror‘s Joe Mewis was impressed with Adam Bogdan’s display in goal, arguing that it may give Klopp food for thought:

Brendan Rodgers chose not to replace him (Simon Mignolet) in the summer, picking up former Bolton stopper Adam Bogdan as cover, but in his two Capital One Cup performances has shown he could act as bone fide competition for the Belgian.

An excellent one-on-one save from Junior Stanislas in the fifth minute showed that he had come with his head screwed on and his reaction save from the same player two minutes after the Liverpool opener was even better. A Stanislas free-kick before half-time gave him another chance to show off his ability as an excellent personal duel between the pair emerged.

His superb 90th minute stop from Ritchie was vital and prevented the Cherries taking the game to extra time.

In the last round he kept Brendan Rodgers in a job for a while longer with his penalty heroics against Carlisle and his display tonight could be enough to give Klopp something to think about.