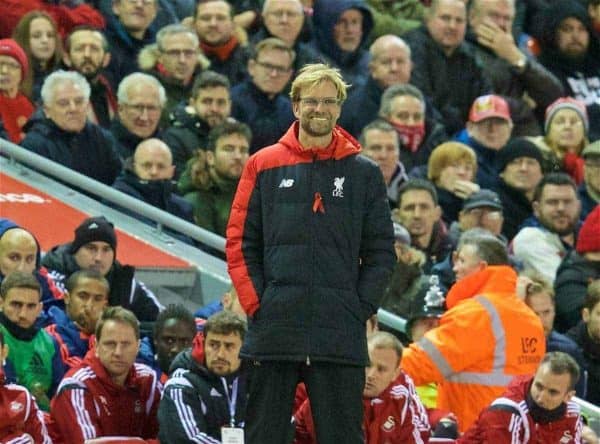 Jurgen Klopp’s Reds recorded their third straight win with a hard-fought performance against the Swans in difficult conditions at Anfield.

The result was everything once again however, especially after European action in midweek, and it was very much another case of job done for the Reds, who move up to sixth in the Premier League table.

Here are the talking points from the victory.

The German took on Lucas’ role in the Brazilian’s absence, and he turned in an excellent display as the deepest of the Reds midfield.

Can was undoubtedly Liverpool’s best performer on a blustery afternoon, commanding the centre of the park expertly, where he enjoyed a strong influence on the game – playing the most passes of the Reds (80) – and provided key defensive support alongside distributing the ball intelligently and reliably throughout.

The command the German held in midfield freed up Milner, Adam Lallana and Roberto Firmino to concentrate on trying to unlock the Swans – which they all struggled to do – and he thwarted the visitors with his power helping destroy numerous Swans attacks as he won four tackles and made four interceptions.

The 22-year-old was also disciplined in his role as the visitors applied pressure late on, and he showed his new-found importance again, excelling with another mature display as he grows into a key component of Klopp’s side.

A flat afternoon and performance was made all the better with the comebacks of Jordan Henderson and Daniel Sturridge.

The England duo both enjoyed positive cameos on their returns, with Henderson providing some nice support play and distribution in the final third, where Sturridge offered a more mobile and technically gifted attacking option, even though he understandably lacked fitness and sharpness.

The Reds are set for a hectic schedule with games coming thick and fast and the availability of the duo handz Klopp a massive lift – not only in terms of numbers, but with the supreme quality they bring, which could really help elevate Liverpool’s play and bring consistency to performances.

It was brilliant to see the key duo return to action at Anfield as they look to help Klopp continue his revitalisation of a struggling campaign.

Klopp expressed reservations that Benteke was capable of playing and performing twice in quick succession, and the 48-year-old was not wrong, with the summer signing struggling all-round and cutting a frustrating figure up top.

Benteke’s touch was poor, his movement counter-productive to those attempting to build play around him, and he carried little goal threat; his main contributions coming with winning free-kicks from the Swans’ hands-on central defensive pairing, Ashley Williams and Kyle Bartley.

The £32million man was on the periphery of the action throughout – he had only 23 touches in the game, three of which were unsuccessful – and he offered next to nothing up front, before being replaced by Sturridge for the final 20 minutes.

The Belgian has notched some vital goals since arriving and provides a handy option in attack, but he remains an unsuited asset to Liverpool as shown again in the victory.

It was yet another good afternoon for Liverpool’s full-back pairing, who turned in strong performances in their roles in the back four.

The defensive pair have been taken for granted somewhat this season due to being Liverpool’s only senior full-back options – leading them to play almost every game since the beginning of the campaign – but their performance level has remained impressively consistent and they were in fine form again.

The pair were solid in their defensive work – Moreno made the most tackles and interceptions of any Red – while also showing desire to contribute to offensive play – playing five key passes between them – as they produced another monumental effort to help claim a welcome clean sheet.

It’s easy to overlook Clyne and Moreno despite being the first names on the team-sheet most weeks, but they really have been unsung heroes so far this season, and key to the Reds good form under Klopp.

For the first time this season, the Reds claimed a welcome Premier League victory after playing in Europa League competition in midweek.

Having picked up just two points in games against Norwich, Southampton and Crystal Palace at Anfield after European action, it was a case of fourth time lucky for Klopp’s side who struggled again, but must be praised for their fight and desire to grind out three points.

The effects of Thursday’s night’s game were evident again with the Reds producing a lethargic and disjointed display – where little came off in the final third and defensive uncertainty kicked in with fatigue as the game progressed – but a big win was earned with a resilient performance in difficult conditions.

It was an afternoon that was all about winning maximum points, and the Reds did just that, moving themselves to within four points of fourth placed Arsenal, and recording a sixth win in seven games as positive momentum is built.