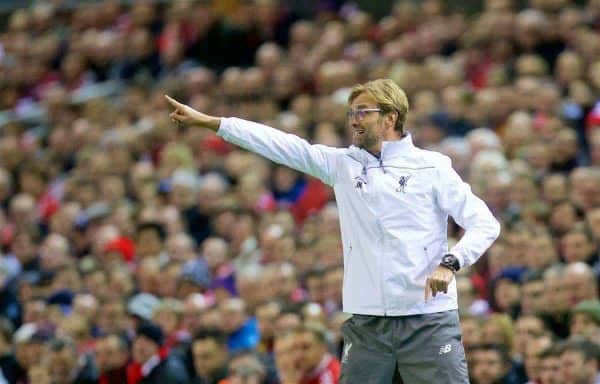 “Far from the intense, dazzling destruction of Man City” – How the morning papers reacted to Liverpool 2-1 Bordeaux

It’s the morning after Liverpool’s 2-1 win over Bordeaux at Anfield. We bring you the best of the post-match newspaper reaction.

There will be more entertaining nights during Jurgen Klopp‘s reign as Liverpool manager, but his side got the job done and qualified for the Europa League knockout stages on Thursday night.

The Reds fell behind after Simon Mignolet held onto the ball for too long – Bordeaux scored from the resulting free-kick – but James Milner‘s penalty and Christian Benteke’s strike saw Liverpool pick up all three points.

Attention now turns to Sunday’s Premier League clash at home to Swansea City, as Klopp’s men look to build on their good recent run of form.

Here’s how the morning papers saw the win over Bordeaux:

James Pearce of the Liverpool Echo focussed on Liverpool’s continued nervy home form; something that has been an issue for a while:

The Reds never came close to hitting the heights they reached in the rout of Manchester City but they did just enough to guarantee that Anfield will host European football in the new year.

Victory moved them to the summit of Group B following FC Sion’s defeat away to Rubin Kazan and a point in Switzerland next month will ensure they stay there.

However, Klopp’s mission to turn Anfield into an arena where opposing teams fear to tread clearly remains a work in progress.

The wait for Liverpool to play at home with the kind of swagger that has lit up Stamford Bridge and the Etihad since the German coach’s appointment goes on.

Yet again Liverpool got a bout of the jitters in L4. Yet again they made life difficult for themselves as they gifted the opposition a cheap goal and then having got themselves in front they failed to be ruthless.

The Guardian‘s Andy Hunter was impressed with Benteke, and praised his performance in the absence of the injury-cursed Daniel Sturridge:

Christian Benteke brought Liverpool a place in the last 32 of the Europa League and Jürgen Klopp reassurance with an exquisite winner against Bordeaux. A reminder of the £32.5m striker’s predatory quality proved timely for the Liverpool manager with Daniel Sturridge returning to the treatment table yet again.

The Belgium international has endured a fitful start to his Anfield career but his fifth goal for the club, following James Milner’s disputed penalty, secured qualification with a game to spare. Liverpool will finish top of Group B with a point against Sion in the finale.

It was far from the intense, dazzling destruction of Manchester City on Saturday but the display delivered a fifth win in six matches for Klopp and an opportunity to rest key players in Switzerland in a fortnight.

“It was difficult at times but you have to win the tough games and this was a tough game. It was a cool night,” said the Liverpool manager. It was for his team, their confidence and for Benteke, but not for Sturridge.

Mignolet was fortunate one early aberration was not punished when he cushioned a header straight to Clement Chantome on the edge of his own area after Joe Allen’s errant back-pass had spread panic. A goalbound effort was blocked by Kolo Toure and, in the aftermath, Lucas managed to nutmeg Diego Rolan on his own penalty spot.

Yet there was no let-off for the goalkeeper after his second blunder when, conscious of the shortcomings in his distribution he was penalised for holding onto the ball for 22 seconds by Israeli official Alon Yefet. The rules state the maximum is six.

Jaroslav Plasil touched an indirect free-kick to Henri Saivet whose whipped effort into the top corner suggested Mignolet had even lined up a seven-man wall on his six-yard line incorrectly.

The Mirror‘s Jacob Murtagh feels the Sturridge saga is now becoming a real issue for Klopp:

Since his arrival at Anfield, there has been one Reds star the Klopp has been enthused about more than any other: Daniel Sturridge.

The German is ultra-positive about the majority of his players, particularly those he sees with that bit of extra magic in their boots; the Coutinho’s of this world.

But Sturridge has been something else. Klopp has spoken of the England striker in glowing terms constantly, always so bombastic about having him fit, whether just in training or ready for a place in the matchday squad. He loves the idea that the player is both a wonderful technical player but also a killer in the final third. Perhaps in his time at Dortmund there were only two players he spoke of which such zest: Lewandowski and Mario Gotze.

But now, another injury setback. Sturridge was with the squad at the hotel, having trained on the eve of the game. Klopp was planning on him playing, at least some part.

Instead, a fresh problem, this time to his foot and Sturridge being sent for a scan instead of heading to Anfield.

In his ESPN player ratings, Steven Kelly was critical of the performances of Mignolet and Roberto Firmino, but was impressed with James Milner:

Mignolet – Only the Belgian could be punished for timewasting in a game Liverpool were dominating. The rules are the rules, but the referee lacked common sense. The goalkeeper had little to do otherwise but still made a good save from a late free-kick. Alas, it will be his handling error that most will remember this performance for.

Milner – Disciplined and unfussy, this was more like Milner from earlier in the season. Took a cool penalty to get the Reds back level, he was more at home on the left than Ibe and made one or two telling interceptions when the French tried to build up a head of steam.

Firmino – A complete contrast to his excellent performance against Manchester City, his early poor touches seemed to set the tone for his whole evening. Perhaps Benteke’s presence confused the Brazilian as to what his role actually was, but the basics of accurate passing and retaining possession still seemed to desert him. Lucky to last as long as he did.