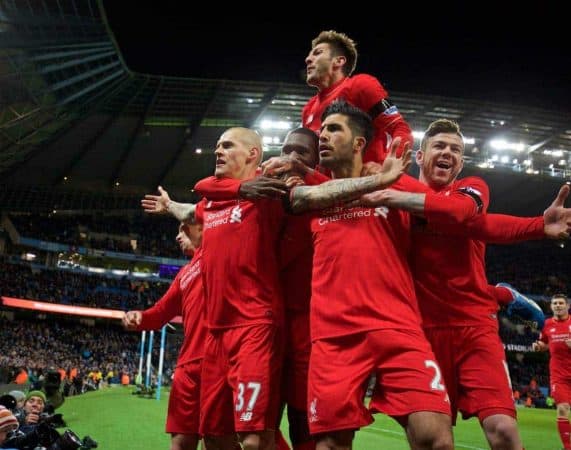 It’s the morning after Liverpool’s sensational 4-1 win away to Man City, and we bring you the best newspaper reaction from the Etihad.

It was a performance that ranks alongside the 5-1 home win against Arsenal in 2014 and 4-1 mauling of Man United at Old Trafford in 2009, in terms of Liverpool’s best displays of the Premier League era.

Jurgen Klopp‘s side were magnificent from start to finish, and in truth, the scoreline actually flattered City in the end.

Eliaquim Mangala’s own goal set the ball rolling, before Philippe Coutinho and Roberto Firmino ran riot to put the Reds in total control. Sergio Aguero pulled one back, but Martin Skrtel’s stunner sealed the win.

Liverpool are doing special things under Klopp, despite some inconsistency, and in a season where Leicester City are top of the league in November, a title challenge should not be out of the question.

Here is how some of the country’s top journalists reacted to the game.

James Pearce of the Liverpool Echo praised Klopp’s positive tactics from the start, and felt Firmino came of age in a Reds shirt:

Rather than sit back, Liverpool grabbed the initiative from the start with a breathtaking show of force.

This was the most majestic first-half display Kopites had witnessed since the 5-1 rout of Arsenal at Anfield in February 2014.

Liverpool were slicker, quicker and more combative in all departments as City were made to look like the Dog & Duck.

Rather than drop deep to help out with defensive duties, Firmino set about tormenting centre-backs Martin Demichelis and Mangala.

The Brazilian attacker had shown signs of his undoubted ability prior to the international break but this was the night when his Liverpool career truly exploded.

The Daily Mail‘s Oliver Holt was in awe of Coutinho’s performance, and believes Klopp’s character is already engrained in his players:

Twenty minutes were left when Jurgen Klopp, the collar of his club track suit turned up against the cold, exploded with rage on the touchline. He leapt into the air as if he had been jolted by an electric current and began to scream and shout and wave his arms vigorously in the vague direction of Adam Lallana. Then he spied an empty water bottle and backheeled it towards the Liverpool bench.

His team played as if they were energised by his fury, as if they, too, were electrified by his hunger. Sure, half the story of this game was that Manchester City were utterly shambolic in defence but the better half was that Liverpool were quite breathtakingly and beautifully brilliant.

Philippe Coutinho was unplayable for long periods of the game, a dancing, dribbling, untouchable sprite who was a mystery City’s defenders could not solve. The Brazilian scored one and had a hand in two of the others. His performance was dazzling.

Mark Ogden of the Telegraph focussed on boo-boy Raheem Sterling, stating that Liverpool did not miss having the 20-year-old in their side whatsoever:

Raheem Sterling may yet have the last laugh on those Liverpool supporters who taunted the Manchester City winger at the end of this destruction of the title favourites at the Etihad, yet he will not be able to say his former club have missed him.

Sterling, whose acrimonious exit from Anfield in July ended one of the most unsavoury transfer sagas in recent memory, was subjected to chants of ‘One greedy b——‘ by the Liverpool supporters as the clock ticked down on this 4-1 rout, but the only surprise is that visiting fans actually noticed their former player on the pitch.

If he left Liverpool because the five-time European champions were not good enough for him, he was offered an emphatic reminder that big clubs always have the ability to hit back as Manuel Pellegrini’s players were humiliated.

There’s only one way to describe Liverpool’s emphatic win at the Etihad yesterday. They played like Borussia Dortmund at their best under Jurgen Klopp.

The 3-1 win at Chelsea could at least be partly explained by the Londoners going through a rough patch. But the display against Manchester City – and the first half in particular – was of another order entirely. We were, to be quite frank, absolutely brilliant.

The result was fantastic. But, for me, it was the manner in which it was achieved that is most exciting. Now Klopp has to work out how to transfer Liverpool’s good away form – only one defeat in their trips to Arsenal, Manchester United, Everton, Tottenham and Chelsea – back to Anfield.

Although Coutinho and Firmino were undoubtedly the stars of the show, ESPN‘s Steven Kelly also lauded the displays of three of the Reds’ more divisive players; Dejan Lovren, Emre Can and James Milner.

Lovren- Solid, efficient and calm. Those may not be the most flattering words ever written but given his previous fragility he needed a good performance to assure his manager that Mamadou Sakho’s absence would not be damaging. Even showed a little game intelligence by taking a breather for a cramp, which seemed to mysteriously vanish as soon as it arrived.

Can- Easily the German’s best game for Liverpool. Put in the dangerous cross for the first goal, played an exquisite backheel to help create the third and throughout showed a discipline and intelligence that some may have thought beyond him. Energy levels stayed high, when a few others were wilting around him.

Milner- His old stomping ground brought the best out of the captain. Nothing too fancy, but supplied lots of experience to the team’s overall gargantuan effort, especially in the period when City were coming back into it. One headed clearance at the back post relieved his defence superbly and helped his team see things out.