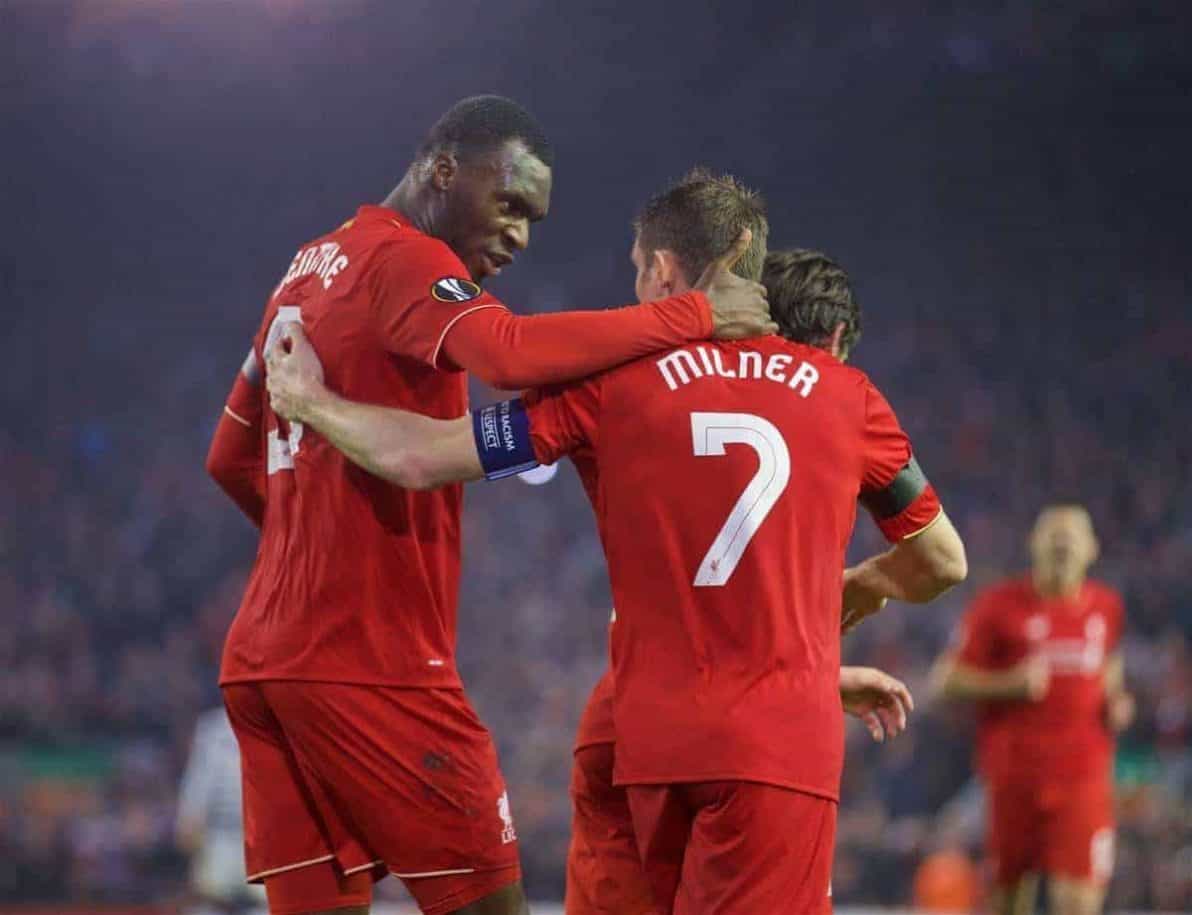 Following Liverpool’s 2-1 win against Bordeaux at Anfield on Thursday, we assess the performance of each Reds player on the night.

Mignolet isn’t exactly the most popular Liverpool player at the best of times, and he had a night that will not help him win new admirers.

The 27-year-old inexplicably held onto the ball for too long to gift Bordeaux a dangerous free-kick, and they duly scored from it. Looked a bag of nerves throughout, and just isn’t quite good enough.

Clyne really is Mr Consistent for the Reds, and he once again barely put a foot wrong at right-back.

As has often been the case this season, a little more attacking thrust would be nice. Hard to be critical, however.

The 34-year-old is a great character, and he produced a pleasing performance in what was a rare outing.

Defensively he was solid on the whole, making one crucial block from a first-half Mignolet error, and a couple of forays forward went down well with the Anfield crowd.

Dejan Lovren & Kolo Toure only won 29% of their tackles and 57% of their aerial duels vs. Bordeaux tonight. Shaky. pic.twitter.com/OsEsrsLjDA

Not a bad night by any means for Lovren, but he never looked particularly convincing at any point.

The Croatian was a little erratic on the ball, but in fairness, he invariably dealt with danger well. It’s hard to feel confident watching him, sadly.

Moreno has enjoyed a new lease of life under Jurgen Klopp, and he was undoubtedly one of Liverpool’s better players on the night.

His energy down the left flank was a constant outlet, but he also continues to look far more solid defensively these days. Will only improve in the coming months and years.

The 28-year-old has been a revelation in recent weeks, but this was one of his less eye-catching displays of 2015/16 to date.

His usual understated presence at the heart of midfield was there for all to see, but he didn’t look quite as secure as he has recently. Got away with a needlessly risky pass inside his own penalty area in the first-half.

Allen will simply never receive praise from some stubborn fans, but he was one of Liverpool’s best players against Bordeaux, and should be pleased with his efforts.

He took a little time to get into the game, which is understandable, but he chopped into tackles, used the ball well and even produced some moments of real class in possession. Better than many think he is.

Once again Milner failed to play with the kind of authority and dependability that he did at Man City, but in general, he did well.

The 29-year-old converted his penalty nervelessly to make it 1-1, and his work-rate and industry were good from start to finish.

The teenager did well, and was one of the Reds’ most lively attacking threats for much of the game.

His pace and power caused problems for the visitors, and one delightful cross should have been converted by Christian Benteke. His decision-making is still a little immature.

After a man of the match performance at City last weekend, Firmino struggled a little in front of his adoring home faithful.

The 24-year-old lost the ball on countless occasions, and his game generally lacked a spark. His work-rate was tremendous, though, and it’s almost impossible for him not to look classy at all times.

Benteke is still yet to hit top gear in a Liverpool shirt, but he keeps scoring.

The big Belgian frustrated at times both on and off the ball, but he took his goal expertly and had two others ruled out for offside. Still question marks as to whether he suits Klopp’s style of play.

The German quietly went about his business, but was nothing to write home about.

The German did nothing wrong in terms of tactics, and will feel he made the right team selections with Sunday in mind.

It was a shrewd move to give Allen playing time, considering he will likely start in place of the suspended Lucas against Swansea, and enough key men were on the pitch to get over the finish line.

Far from a memorable night of management, but he did nothing wrong.