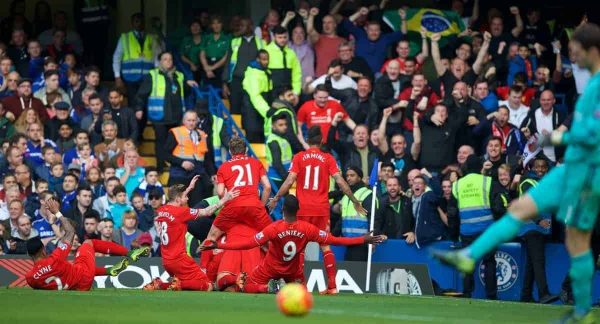 It’s the morning after Liverpool’s thoroughly deserved win against Chelsea and we round-up the best media reaction from an incredibly enjoyable afternoon at Stamford Bridge.

Jurgen Klopp claimed his first Premier League win in style as his Reds disposed of Chelsea with ease romping to a 3-1 win.

It was a stunning performance – after an early set-back from Ramires’ header – which saw the Reds come from behind to record their first win at Stamford Bridge since 2011, courtesy of Philippe Coutinho’s brace and Christian Benteke’s late match sealer.

Klopp’s side impressed hugely, controlling the vast majority of the game against the Blues and scoring three goals away from home for the first time since a 3-1 win at Leicester in December 2014.

Making his first league start under Klopp, Roberto Firmino produced an excellent performance in his ‘false 9’ role while Coutinho made a welcome return to form on an afternoon that saw every Red play their part.

It was a brilliant first league success for Klopp who becomes the first manager since Bob Paisley to avoid defeat in his first five games in charge.

Here is how the papers reacted to the comprehensive win.

The Liverpool Echo’s James Pearce praised the unity of the club currently since the German’s arrival which inspired “the most delicious of treats” for the travelling Kop:

Klopp returned to haunt Mourinho on Halloween – two and a half years after embarrassing his Real Madrid side in the Champions League.

“You’re getting sacked in the morning,” rung around Stamford Bridge before a deafening rendition of “you’re not special anymore.”

While Mourinho scowled and disappeared down the tunnel with his disjointed and dispirited Chelsea side in a full blown crisis, a beaming Klopp celebrated on the turf with the players he has managed to quickly gel into a cohesive unit.

The spirit in the camp shone through. The manager, the players and the supporters as one powerful united force – it’s been some time since that was the case at Liverpool.

Most got the customary bear hug from Klopp, but pint-sized match-winner Coutinho was lifted clean off his feet.

Neil Ashton of the Daily Mail was unequivocal in his praise of Klopp’s side, who thoroughly deserved the win after producing a display that was simply too good for the Blues:

They were beaten here, well beaten in the end, humbled and embarrassed by the brisk, adventurous football that Liverpool’s players have taken to playing under their new coach Jurgen Klopp.

Philippe Coutinho’s goals were both peaches: one from his left boot to equalise two minutes into added time in the first half and one from the right that beat Asmir Begovic deep into the second half.

By the time substitute Christian Benteke scored Liverpool’s third seven minutes from time, Mourinho carried the haunted look of a man who had run out of ideas.

Liverpool were superior in every department, tactical and technical.

ESPN’s Michael Cox commented on the tenacity of Klopp’s men out of possession, while also hailing Benteke’s impact from the bench in a superb half-an-hour cameo:

In keeping with previous performances, Liverpool pressed well. They regained possession immediately after it was conceded, the best example coming after 20 minutes when Coutinho lost the ball, Alberto Moreno pressed and after a quick passing move, Nathaniel Clyne dragged a shot wide.

Benteke, meanwhile, helped change this game. It wasn’t necessarily by getting on the end of crosses, as is his domain, but by providing a proper focal point and a battering ram against Gary Cahill and Terry.

He helped Liverpool make up ground and get up the pitch, and the fact he provided the third goal underlined his goal threat. He could be a huge player for Klopp, though it remains to be seen where Daniel Sturridge fits in.

Klopp’s style depends upon his players believing him, and this win should inspire great confidence. They fell behind and rode their luck, but they eventually prevailed. Now Klopp will stress the importance of pushing on.

The Daily Mirror’s John Cross complimented Mamadou Sakho on yet another superb defensive showing – despite the inaccurate jibe about his distribution – as the Frenchman proves to be the leader the Reds have been crying out for:

If there is one payer to have really excelled under Klopp then it has to be Mamadou Sakho.

The powerful centre half has been outstanding in recent games and was again at Stamford Bridge.

Big, strong and commanding. All the qualities why Liverpool signed him now look as if they are coming to the fore. Even his passing was good.

The Echo’s Neil Jones joined Cross in his praise of Sakho, who with the assistance of Martin Skrtel produced a dominating defensive display that dealt superbly with the threat of Diego Costa:

The Spanish international had his moments, but was shackled brilliantly by Martin Skrtel and Mamadou Sakho, whose understanding is growing by the week.

With Skrtel as the ‘lead’ centre back, contesting the majority of the aerial balls with Costa, Sakho did the rest superbly.

Positive signs, then, for Klopp. Liverpool’s defending generally leaves a lot to be desired, but his two centre backs look like they are ready for the challenges which await.

Finally, the Mail’s Dominic King, eulogised over the impact Klopp made from the touchline throughout and how the German made the difference on a memorable day:

Up and down, springing into his technical area like jack-in-the-box, Klopp’s intensity was magnetic and it was evident he was going to be the only manager who affected the game and his introduction of Christian Benteke in the 63rd minute was crucial.

Within 20 minutes, Liverpool had plundered two more goals and Klopp was unable to contain himself when Benteke ripped their decisive third strike past Begovic, leaping in the air and punching his delight. This was deeply significant afternoon in Liverpool’s season and Klopp knew it.

The contrast between him and the brooding, glowering Mourinho was stark as it could be. Liverpool brought Klopp into to give them back their energy and desire and restore their reputation. The early evidence shows they have chosen wisely.