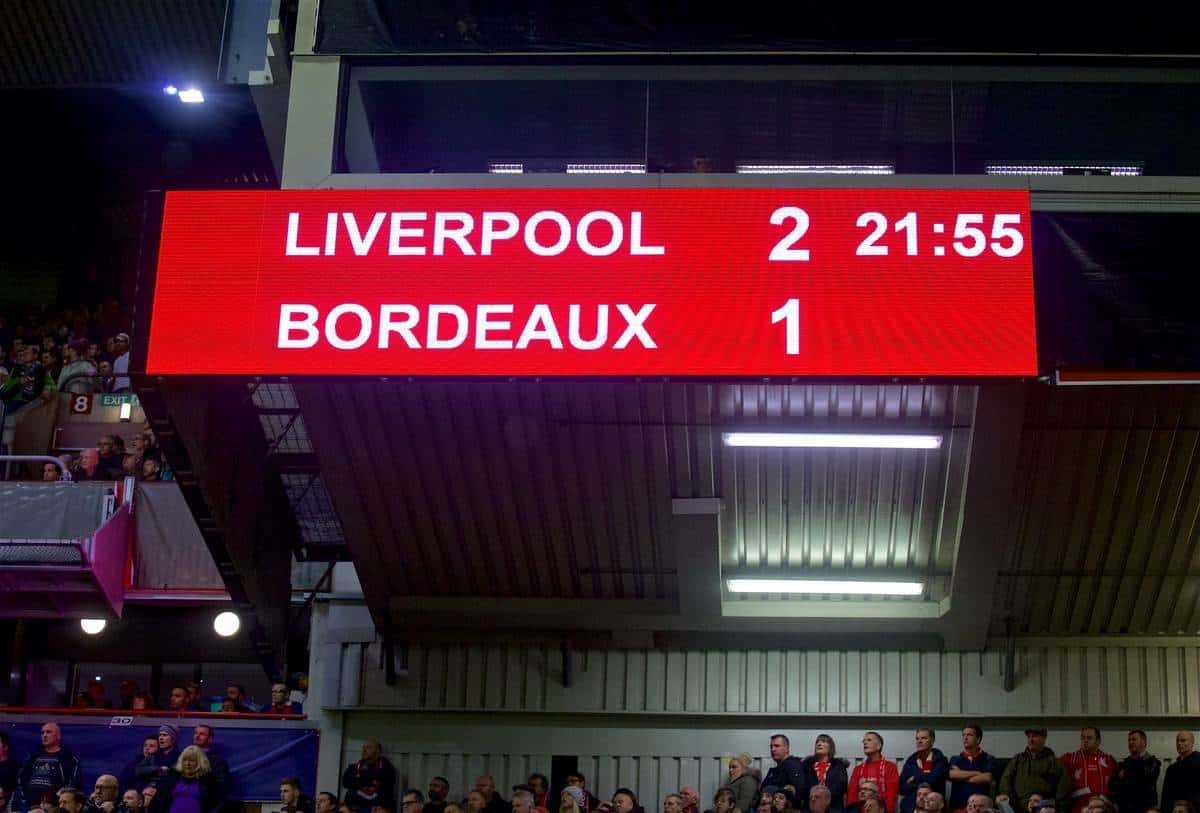 After Liverpool secured qualification from Group B with a 2-1 victory against Bordeaux, we pick five talking points form the Anfield win.

Jurgen Klopp’s Reds booked their place in the knockout stage of the Europa League and moved to the top of Group B with a scrappy 2-1 win over Willy Sagnol’s side.

A flat first half was sparked into life when Simon Mignolet’s stupidity holding onto the ball for too long was punished by Henri Saivet’s strike after 33 minutes, moments after Christian Benteke saw his finish ruled out.

But the Reds were level five minutes later when James Milner converted from the spot after Benteke was fouled, and the Belgian then fired Liverpool ahead on the stroke of half time with a fantastic strike after an immaculate first touch from Nathaniel Clyne’s cross.

Klopp’s side saw out the second period – which saw another Benteke goal disallowed – with a battling performance that proved just enough to send the Reds into the next round.

Here are the talking points from the success.

With Klopp reportedly seeking a new goalkeeper, Mignolet did himself no favours in convincing the German he doesn’t need one with a nightmare performance.

Incompetance of the highest order from the Belgian – in taking 20 seconds to release the ball that saw Saivet fire home the resulting free-kick – put the Reds behind, and he will be a relieved man that his unbelievable foolishness didn’t prove as costly as it could have.

Watching that over again, that's actually embarrassing from a professional goalkeeper. Half-hour in, at 0-0, at home, no clue. #LFC

It was an unforgivable error from Mignolet – who didn’t cover himself in glory with his positioning for the goal conceded – and one that had the feeling that it may well have made Klopp’s mind up once and for all over bringing a new stopper to Anfield.

Despite pulling off an excellent save in stoppage time, it was a night to forget for the Belgian whose time as No.1 at Anfield is surely now coming to an end.

Benteke frustrates but proves the difference

It was a busy and mixed night of fortunes for the Belgian, who frustrated and pleased for Klopp’s men in equal measure.

Winning the penalty for Milner’s equaliser and firing the Reds ahead in spectacular fashion showed the positive aspects of his game up top, where he proved a handful for Bordeaux’s back line – winning nine aerial duels – alongside the ability to provide that unpredictable moment of raw explosive ability.

But overall, Benteke – who was denied a hat-trick seeing two goals ruled out – was frustrating. He was sluggish in possession – completing just 62% of his passes – was slow to react to situations and provided an all too static option in attack, leaving Roberto Firmino with the onus of being the man to provide going forwards.

The restriction on Liverpool’s forward play with the Belgian spearheading the attack rather than the free-roaming trio of Adam Lallana, Philippe Coutinho and Firmino was particularly noticeable, and not for the better, despite his match winning efforts.

The Belgian proved the difference on the night and deserves credit for that, but it was very much a indifferent evening overall.

Kolo Toure proves his worth with reliable performance

On a big night at Anfield with a resilient defensive display needed, Toure showed his usefulness to the Reds with a strong performance.

Taking the place of Martin Skrtel alongside Dejan Lovren, the experienced Ivorian slotted in seamlessly next to the Croatian, covering well throughout and producing a simple but effective display – making eight clearances and four tackles alongside registering the highest pass completion of any Red with 90.2%.

Fear of rustiness surrounded the 34-year-old on his first appearance since Liverpool’s first win under Klopp against Bournemouth a month ago, but ever the professional, Toure was reliable and disciplined when it was needed, showing the reliability he provides as an under-appreciated, and skilled veteran at fourth choice.

It was hardly a night of backs to the wall stuff, but when needed to stand up and be counted, Kolo did exactly that, proving his worth to Klopp’s squad in the process.

Coming into the side on a night of real importance, Allen impressed with a typically tidy performance in midfield.

The Welshman was intelligent with his use of the ball alongside Lucas Leiva, and worked well in breaking up the visitors’ play – winning more tackles than any teammate (5) – in turn, helping keep Liverpool in the ascendancy and dominant in the game for large periods.

Liverpool's top performers tonight were Joe Allen and Kolo Toure. A shaky first half for the lot, but both produced confident displays. #LFC

The 25-year-old really grew into the contest in the second period before being replaced by Emre Can – supporting well from midfield, and setting up attacks with some tidy link play with Firmino, which saw Benteke fire into the Kop from the Brazilian’s cut-back as well as starting the move for the Belgian’s second disallowed effort.

Certain to keep his place on Sunday against former club Swansea with Lucas suspended, Allen showed his readiness for increased action with a decent showing at Anfield. It was far from the blitzing display of the Etihad Stadium five days ago, but it was firmly job done for Klopp’s men.

The challenge was to ensure qualification was sealed at the first attempt with a game to spare, and the Reds achieved it with a vital victory that now allows for full focus on the potentially high-rewarding Premier League run of fixtures coming up over the festive period.

Scrappy game, very little of usual pressing but a win and passage to next so all good in the end.

Klopp now has the ability to travel to Sion for the last Europa group game without pressure of needing a result, allowing him to preserve key men for the important league game against West Brom three days later – one of a number of winnable games for Liverpool that could really see the take-off of a top four challenge.

That win gives Liverpool crucial leeway when negotiating a busy festive schedule. Play the kids vs. Sion and focus on stabilising form. #LFC

It was a night where cementing qualification was everything, regardless of performance, and the Reds did exactly what was needed.