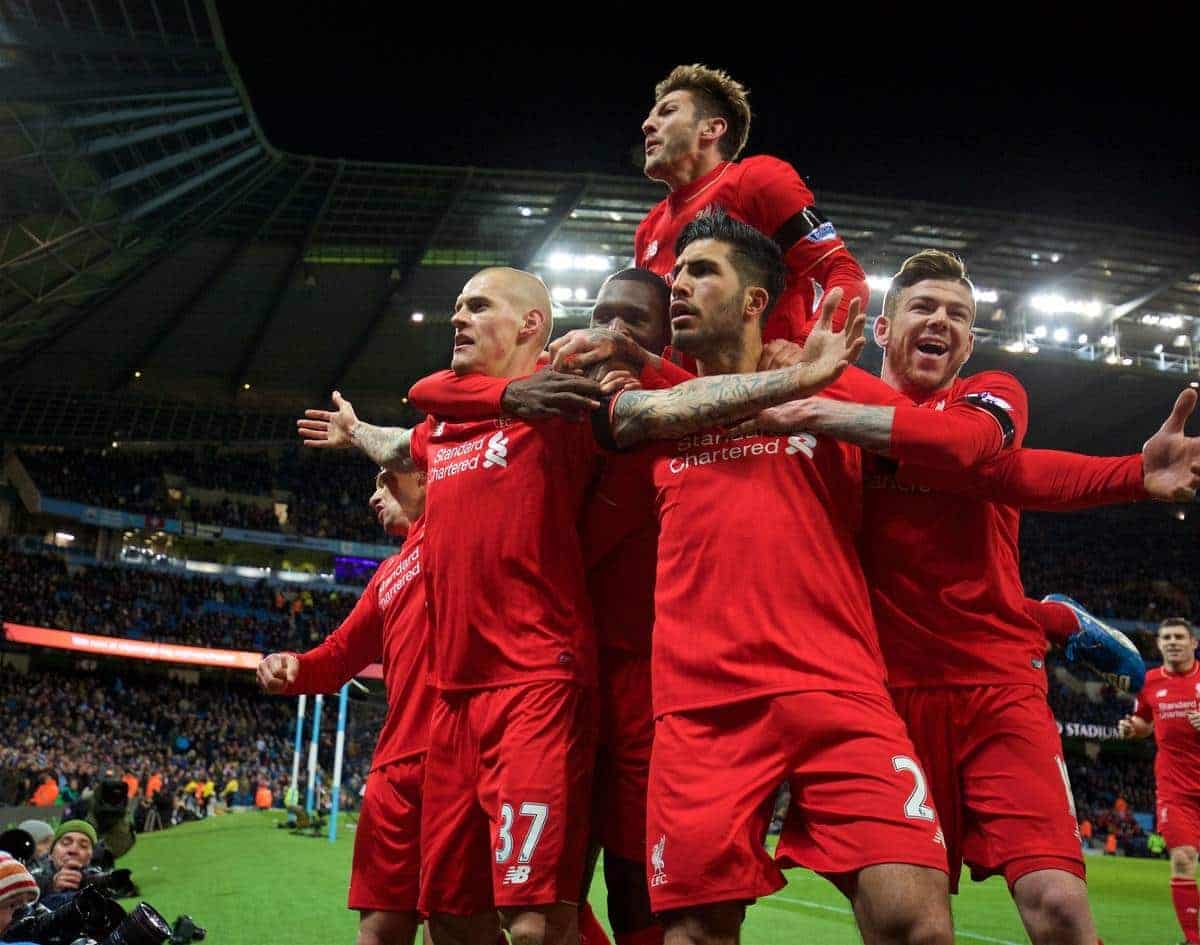 Liverpool’s impressive win over Man City on Saturday will live long in the memory, but is it the Reds’ best ever Premier League victory?

Jurgen Klopp continues to work his magic in the Anfield hot-seat, and the German has made giant strides with the team since becoming manager in early October.

The Reds have enjoyed many great wins in the Premier League since its inception in 1992, but where does their mauling of City rank?

Here is our top 10, based on a combination of performance, result and drama:

When Liverpool faced Man United at Old Trafford midway through the 2001/02 season, Sir Alex Ferguson’s side were looking for a ninth straight league victory.

The Reds were challenging for the title along with United and Arsenal, and they picked up a memorable, gritty win to improve their chances greatly.

For the neutral, it was probably far from a classic encounter, but Liverpool were excellent against one of Europe’s top sides at the time. The match was decided late in the day.

A superb Steven Gerrard pass found Danny Murphy in space inside the penalty area, and the Englishman lofted a delightful effort over Fabien Barthez with just five minutes remaining. Cue pandemonium in the away end.

There were so many brilliant wins during the unforgettable 2013/14 season, but Liverpool’s annihilation of Spurs at White Hart Lane was up there with the best.

Brendan Rodgers’ men completely dominated from start to finish, producing a magnificent performance in the absence of Gerrard.

Luis Suarez and Jordan Henderson both finished emphatically to give the Reds a 2-0 half-time lead, before Jon Flanagan‘s memorable strike put the game to bed after the break.

Suarez got his second of the game late in the day, and Raheem Sterling added a fifth, as Liverpool ran riot in north London.

In a match that is still widely regarded as the most entertaining in Premier League history, Liverpool overcame Kevin Keegan’s brilliant Newcastle side in a sensational encounter at Anfield in 1996.

The Magpies knew victory would keep them in pole position to win the title, while the Reds were well aware that three points were paramount if they were to remain in the race.

Robbie Fowler headed the hosts in front right at the start of proceedings, but goals from Les Ferdinand and David Ginola gave Newcastle a half-time lead.

Fowler equalised after the break, Faustino Asprilla made it 3-2 to Newcastle and Stan Collymore levelled matters once more, before an unforgettable finale.

Reds legends Ian Rush and John Barnes combined, before the latter found Collymore in space. The enigmatic striker powered a strike into the Kop net with seconds remaining, completing an amazing win.

Liverpool have been fortunate enough to have enjoyed many great victories over Merseyside rivals Everton, but their Goodison Park triumph in April 2001 has to be the best of the Premier League era.

Houllier’s side knew that a win was key in their quest to reach the Champions League for the first time, and the Toffees were out to spoil the party.

Emile Heskey powered the visitors in front early on, but Duncan Ferguson’s emphatic finish saw the scores level at the break.

A superb second-half counter-attack saw Markus Babbel put the Reds back ahead, but Fowler’s missed penalty looked to be crucial, with David Unsworth’s late spot-kick seemingly earning Everton a point.

It remains one of the most dramatic Merseyside derby moments ever.

The aforementioned victory at Old Trafford in 2002 was a great day, but this win 14 months earlier felt even more special.

It had been two years since United had been beaten at home in the league when Liverpool visited in December 2000, with Ferguson’s team at the peak of their powers.

The Reds were magnificent throughout, however, producing a wonderful team performance that was full of defensive quality and heart.

Murphy was once again the hero, curling home an inch-perfect free-kick shortly before half-time. The Reds saw out a nervy ending, but Luke Chadwick’s late red card for hauling down Vladimir Smicer was the final nail in United’s coffin.

Rodgers’ young side may have ended up failing to win the Premier League in 2013/14, but their performance against a top draw Man City side, in an enormous match, was superb.

Many felt that it was a title decider at the time, and Liverpool edged to a victory in front of an Anfield crowd that has rarely been louder.

Sterling put the Reds ahead, and Martin Skrtel’s glancing header put them in dreamland soon after, but a response came from City.

David Silva pulled a goal back and Glen Johnson’s unlucky own goal made it 2-2, but there was still time for Philippe Coutinho to curl home a dramatic winner with 12 minutes remaining.

It may have all ended in tears come the end of the season, but what a day that was. There may be more entertaining, memorable victories lower down on this list, but Liverpool have rarely been more disciplined and tactically perfect than at Chelsea in late 2008.

Rafa Benitez’s 2008/09 side was probably Liverpool’s best of the Premier League era, with Jamie Carragher, Javier Mascherano, Xabi Alonso, Gerrard and Fernando Torres all in their prime, among others.

They overcame a Chelsea team who were, quite ridiculously, unbeaten at home in 86 matches in the league.

Alonso’s deflected shot proved to be the only goal of the game, but Liverpool never looked ruffled and arguably deserved to win by more in the end.

It was a result and performance that made you realise they were genuine title contenders.

Such was the brilliance of Saturday’s performance at the Etihad, it slots in at third in Liverpool’s greatest Premier League wins.

Not many were expecting a positive result from Klopp’s side, but they destroyed City at one of the hardest grounds to visit in the country.

The relentless pressing and slick passing was a joy to watch, and an own goal from Eliaquim Mangala, followed by eye-catching efforts from Coutinho and Roberto Firmino saw Liverpool 3-0 up inside 32 minutes.

Although Sergio Aguero pulled a goal back just before the interval, Martin Skrtel’s thunderous strike finished off City for good with nine minutes left.

No team has dominated Manuel Pellegrini’s side quite like that in recent years.

This may not have been 90 minutes of out-and-out brilliance, but that is only because Liverpool had sewn the game up inside one of the most blistering opening spells of football you will ever see.

Arsenal arrived at Anfield in February 2014 top of the league and brimming with confidence, but they were dismantled on Merseyside.

A stunning opening to the game saw Skrtel score twice, Sterling finish off a flowing move and Sturridge curl home clinically, with the Gunners finding themselves 4-0 down with not even a quarter of the game played.

The quality and speed of Liverpool’s play could only be compared to their 5-0 drubbing of Nottingham Forest in 1988, and Arsene Wenger’s side were powerless to do anything about it.

Sterling got his second after the break, and Mikel Arteta scored a meaningless penalty, but it was that first-half performance that will never be forgotten.

Lists such as these are always subjective, but in terms of performance, result, importance and opponent, Liverpool’s 4-1 destruction of United back in March 2009 tops the pile.

Ferguson’s team were fantastic at this time, with the likes of Cristiano Ronaldo, Wayne Rooney and Carlos Tevez all flying, and victory at Old Trafford felt extremely unlikely.

When Ronaldo fired the hosts in front from the penalty spot with 23 minutes on the clock, any lingering title hopes that Liverpool had looked over.

They responded in amazing fashion, however, with Torres capitalising on Nemanja Vidic’s error to make it 1-1, and Gerrard giving the Reds the lead from the spot.

In the second-half, things got even better. Vidic was sent-off for hauling down Gerrard, and from the resulting free-kick, Fabio Aurelio curled a majestic effort past Edwin van der Sar.

Andrea Dossena’s lofted finish completed United’s humiliation on their own patch, and Liverpool could celebrate their most impressive win in Premier League history.