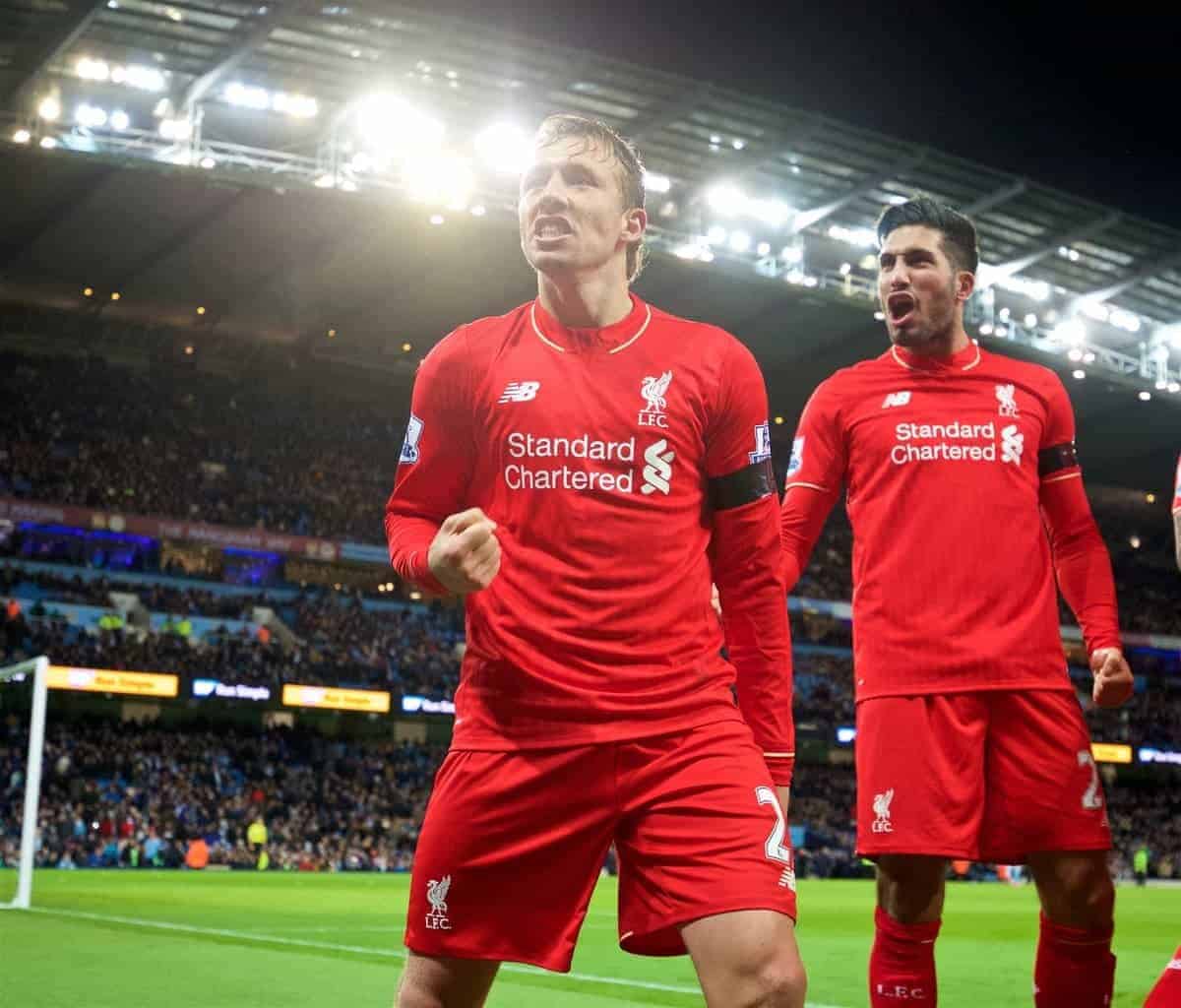 November has seen Liverpool go from strength to strength under Jurgen Klopp, and we select their best and worst players of the month.

Just one defeat in November represents yet more progress from the Reds, who have gone from a shambles under Brendan Rodgers to a force to be reckoned with under Klopp.

Four wins in the month is a good return, with the 4-1 victory at Manchester City not only Liverpool’s performance of the season so far, but one of their best away victories for a number of years.

Here are Liverpool’s three best and worst players from this last month of action.

No Liverpool player during the last decade has come back from the dead more times than Lucas Leiva, and he is currently playing the best football of his career for the Reds.

The 28-year-old has arguably been his side’s best player since Klopp’s arrival, and his importance to the side cannot be underestimated.

Lucas has been outstanding in his defensive-midfield role, reading the ball expertly, pressing relentlessly and playing with a leadership that many felt he didn’t have in his armoury.

The Brazilian was one of the Reds’ better players on a disappointing day against Crystal Palace, and he bossed the midfield battle in the unforgettable win over City.

He was again solid and reliable against Bordeaux – he hasn’t had one remotely poor game under Klopp – before suspension against Swansea City ended his month on the pitch early.

Many felt Lucas had no future at Anfield in 2015/16, but the way he has responded has been admirable. He is one of the most popular players at the club, both in terms of his influence on the pitch and likeable character off it. It is hard to find any Reds players who have genuinely disappointed over the last four weeks or so, but Simon Mignolet immediately springs to mind.

Liverpool’s No. 1 has always endured a rocky relationship with the home faithful, and some of his November performances once again raised question marks about his quality.

An easy night away to Rubin Kazan was followed by the defeat to Palace, and Mignolet did not exactly cover himself in glory with Scott Dann’s winner.

A solid evening away to City came next, which included a good save to deny Sergio Aguero, but he endured an evening to forget against Bordeaux at Anfield.

The 27-year-old’s inexplicable decision to keep hold of the ball for too long saw the French side awarded a free-kick inside the penalty area, and they scored the resulting set-piece. He looked a bag of nerves throughout.

The Belgium international dealt well in general against Swansea, with strong winds not making life easy, but it was not a month that has done Mignolet’s Liverpool future any favours.

It was a slow start to the season for Philippe Coutinho, whose form suffered at the end of Rodgers’ reign, but he has shown exactly why he is Liverpool’s best player during this last month.

The dazzling Brazilian may not have featured a huge amount, missing the wins against Bordeaux and Swansea through injury, but when he did play, he was the creative hub of Klopp’s team.

He scored the Reds’ only goal in the eventual home loss to Palace, as he continued his good goalscoring form that started away to Chelsea at the end of October.

It was against City where Coutinho was sensational, however. He tore Manuel Pellegrini’s side to shreds with his attacking brilliance, scoring one and playing a big part in two other goals.

That display alone was worthy of the ex-Inter Milan youngster being named among Liverpool’s best performers in November.

It feels harsh to say that Christian Benteke has been a disappointment for Liverpool so far, but he certainly hasn’t hit top gear.

November was a month in which he showed fleeting moments of quality, but too often he flattered to deceive at key times.

A lack of movement was evident in the 1-0 win away to Rubin Kazan, while a shocking display in the defeat to Palace saw Benteke squander a number of very good chances throughout the game.

A cameo role against City followed, in which he should have found the net late on, but he did score his only goal of the month against Bordeaux, which proved to be the winner.

Benteke returned to frustrating ways against Swansea, failing to link up with team-mates and generally cutting a slightly disinterested figure, and it epitomised his November.

The jury is certainly still out with the big Belgian, who doesn’t appear to be ideally suited to Klopp’s style. Alberto Moreno was another player who Liverpool supporters were losing faith with when Rodgers was in charge, but he has been a revelation since Klopp became manager.

The 23-year-old has found a level of consistency that it often felt hard to imagine him finding, and he is now a key player.

The pace and energy that he brings from left-back helps give the Reds some real attacking thrust down the left flank, but his defensive work has also improved markedly.

Moreno was an ever-present throughout November, and he never slipped below a six-out-of-10 performance at any point. He was particularly impressive against Swansea, and a candidate for Man of the Match.

The Spaniard is an infectious character who clearly loves playing for Liverpool, and his return to top form has been subtly key to the Reds resurgence in recent months.

He has the potential to develop into one of the Premier League‘s best full-backs over the next couple of years.

Selecting James Milner as one of Liverpool’s poorer players in November feels very unfair, but there really wasn’t anyone else who came into consideration.

The England international is still yet to hit the heights many expected him to when he joined from City in the summer, but there are signs of improvement.

Milner’s worst display of November came in the Reds’ first game of the month, against Kazan, but he did well in the drubbing of City.

Two important penalties against both Bordeaux and Swansea, coupled with solid performances, saw the 29-year-old’s influence continue to get stronger as December loomed.

Milner is not a player who instantly catches the eye, but his work off the ball and all-round intelligence are things that many of his critics fail to notice.