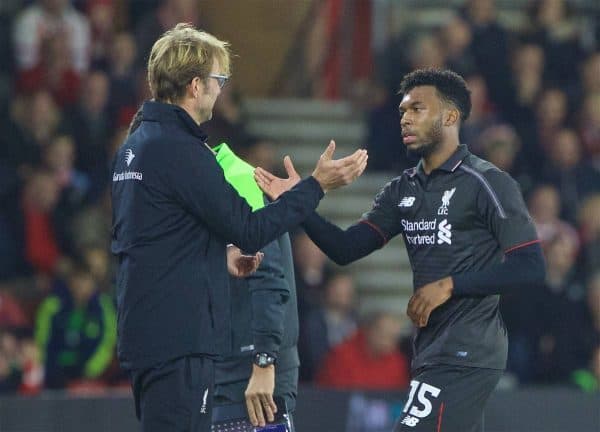 Spurs to lose, Sturridge to score – 5 predictions for the Premier League weekend

The Premier League takes centre stage once more this weekend, and we make five bold predictions relating to the upcoming action.

It’s so pleasant not having to worry about another imminent international break.

League action dominates our screens this weekend, following midweek League Cup commitments, and there are a number of eye-catching games to look out for.

Both Leicester City and Tottenham will look to carry on their impressive current form when they face respective trips to Swansea City and West Brom.

That’s just a taste of the action; here are five things that we think will happen in Gameweek 15.

Daniel Sturridge to score at Newcastle

If ever there was any doubt about Sturridge’s talent, and importance to Liverpool, you just had to look at his performance in the 6-1 rout of Southampton on Wednesday.

The 26-year-old scored twice in the space of four first-half minutes to turn the game on its head, outlining his ruthless finishing in the process.

Sturridge is a player who never takes long to get back into his stride following injury, and he will be raring to go against Newcastle on Sunday afternoon.

Steve McClaren’s side are shot for confidence at the moment, and while predicting a comfortable Reds victory would be tempting fate, Sturridge will find the back of the net at some point during proceedings.

Spurs to lose at West Brom

Mauricio Pochettino’s Spurs side have been a revelation so far in 2015/16, with their only defeat in the league coming at Old Trafford on the opening day of the season.

The north Londoners are made of far sterner stuff these days, and bringing in the likes of Toby Alderweireld and Heung-Min Son have been inspired moves from Pochettino.

Despite their obvious improvements, they are due a defeat at some point, and they visit a tricky West Brom side on Saturday afternoon.

Tony Pulis teams are always horrible to play against, as Arsenal found out recently, and their direct, gritty style will get the better of Spurs at the Hawthorns.

Twice in the space of a couple of weeks I predicted that both Leicester and Jamie Vardy’s bubbles would burst, and twice I was proven wrong.

This week, I am bottling it and going somewhere in between.

The Foxes visit the Liberty Stadium to face a Swansea side really struggling at the moment, and it seems hard to see anything other than a win for Claudio Ranieri’s men.

They will pick up all three points in Wales on Saturday, but it will finally be the day that Vardy’s incredible run of form comes to an end.

The 28-year-old is looking to score in a 12th consecutive league game, but he will have to settle for 11 on the bounce.

In a lot of ways, City should be strolling the Premier League this season. They have the best team on paper, and a brilliant start should have seen them continue to kick on.

Instead, they have let their rivals back into contention, dropping sloppy points and playing with an air of unpredictability.

They visit Stoke on Saturday lunchtime, in what could be a tough encounter, but they will pick up a victory and impress in the process.

A potential attacking quartet of Raheem Sterling, David Silva, Kevin De Bruyne and Sergio Aguero has the ability to rip any defence to shreds on their day.

There can be no doubting that Alan Pardew has turned Crystal Palace into one of the most dangerous counter-attacking sides in the country.

The combined speed and quality of players like Wilfried Zaha, Yohan Cabaye, Yannick Bolasie and Jason Puncheon make them a tough proposition for anyone.

The Eagles face Everton at Goodison Park on Monday Night Football looking for a second win in Liverpool in the space of a month. They will get it.

Roberto Martinez’s side are on an impressive run of form in their own right, and many will be expecting them to prevail on the night. Palace will nick it, though, thanks to that aforementioned threat on the break.

Let us know your weekend predictions in the comments below. How many of ours do you agree with?

> Joe Allen makes his case to replace suspended Emre Can vs. Newcastle