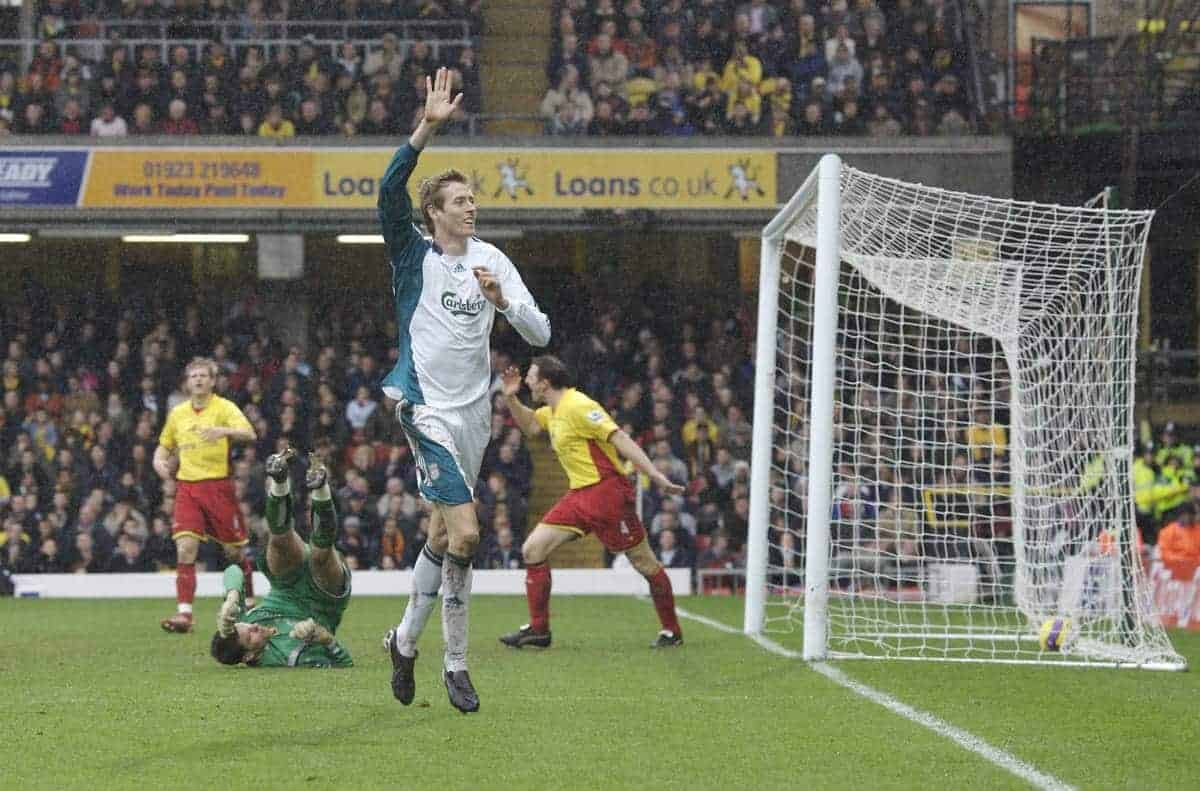 Liverpool face Watford on Sunday, in what is the first meeting between the two sides in almost nine years. We take a look back at their most recent clash in January 2007. Rafa Benitez’s Reds side had endured an up-and-down first half to their 2006/07 campaign, with defeats away to Everton and Manchester United undisputed low points.

Liverpool had also been knocked out of both the FA Cup and League Cup by Arsenal in the lead-up to the Watford showdown, so confidence wasn’t exactly high.

Despite some days to forget, however, Benitez’s men were still third in the Premier League as they headed to Vicarage Road. We would take that now, wouldn’t we?

Liverpool were one of Europe’s most respected teams at the time, and another formidable Champions League run was in full swing.

Benitez opted for an un-Benitez-like 3-4-3 formation, with Dirk Kuyt, Craig Bellamy and Peter Crouch in a front three and Steven Gerrard and Xabi Alonso in central midfield.

Steve Finnan and Fabio Aurelio took up rare wing-back roles, while Jamie Carragher, Sami Hyypia and Daniel Agger made up the defence.

Watford were rock bottom of the Premier League table when Liverpool came to visit and, in truth, they looked a side destined for the drop from start to finish.

Gerrard and Crouch both came close to opening the scoring early on in proceedings, but the visitors didn’t have to wait long to get in front.

A young Ben Foster in the Watford goal kept out a Crouch effort, but he was powerless to stop Bellamy’s close-range effort, who had been found by Finnan.

The game was effectively put to bed just before half-time, and again Foster could feel hard done by.

Crouch was the man to score this time, heading home with the goal gaping, following a magnificent save from Foster to deny Bellamy.

If Watford had any hope of getting something from the game in the second half, this were completely extinguished just three minutes after the restart.

Bellamy and Crouch, excellent all afternoon, combined to devastating effect, with the former finding the latter to finish clinically.

From that point on it was merely a procession for Liverpool, and although the hosts produced a spirited spell in the second half, the Reds were barely in second gear by then.

The win kept Benitez’s team in third place, strengthening their top-four chances in the process.

Aidy Boothroyd’s Watford were now 10 points from safety, and would eventually be relegated.

A solid Premier League campaign saw Liverpool finish third – there was very little threat of failing to reach the Champions League around this time – with champions United and runners-up Chelsea finishing ahead of the Reds.

A 2-0 win against the Blues at Anfield and a 4-1 drubbing of Arsenal were league results that stood out between January and May, although a 90th-minute John O’Shea winner in a 1-0 defeat to United was a moment to forget.

For Liverpool, however, their season was defined by yet another memorable Champions League campaign.

The Reds knocked almighty Barcelona out in the last 16, thanks largely to a famous 2-1 win at Camp Nou – who else remembers that memorable golf club celebration between Bellamy and John Arne Riise? – and dispatched PSV Eindhoven in the quarter-finals.

A nerve-jangling but ultimately joyous semi-final against Chelsea came next, with Liverpool prevailing in a penalty shootout in the second-leg on Merseyside.

Although AC Milan avenged their 2005 defeat to the Reds in the final in Athens, winning 2-1, it had still been a wonderful effort from Benitez and his talented side.

This was a time when English clubs were dominant in Europe, which feels like a lifetime ago now.

Hopefully this Sunday’s clash with Watford will bring similar success for Jurgen Klopp and his men, as they look to bounce back from disappointing dropped points against Newcastle and West Brom.