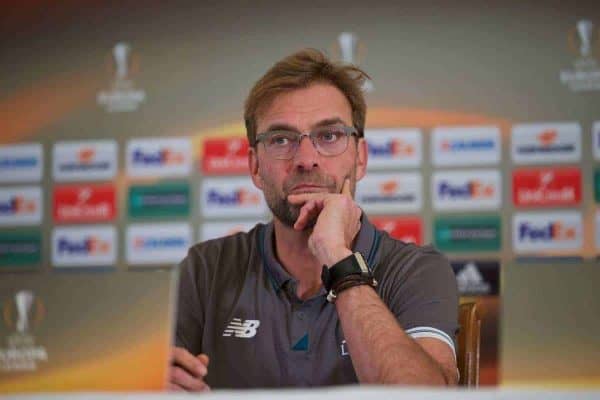 Klopp confirms Daniel Sturridge injury: “Not that serious but we have to build up his resistance”

The England international is out for a number of weeks with a hamstring strain sustained in Sunday’s 2-0 defeat at Newcastle – only his sixth appearance since April 8.

Manager Klopp has previously said the 26-year-old needs to differentiate between “pain and serious pain” but accepts without a proper pre-season behind him the forward is more susceptible to injury breakdowns.

That means Klopp and the club’s strength and conditioning staff may have to specifically tailor his training in an attempt to avoid further problems.

“It’s a hamstring injury and it’s not easy to say when he is back for us,” Klopp said ahead of their final Europa League group tie against Sion in Switzerland.

“There are two different things we have to look on. The one is the injury and the other is how we bring him into shape so it’s not so intensive for him when he needs to train.

“The good thing with the muscle injury is he could start to run and all the others things he needs, but not play football.

“If you look at his history in the last month and year its not the longest time he could train.

“It is very important with all the games we have to find the specific point when it is possible to bring him for minutes and what makes more sense for his general shape.

“I can’t say what we will do exactly, but we have to look at it.

“The injury is not that serious but we have to build up his resistance. You have to cool down this situation a bit and help him be more resistant.

In Sturridge’s absence youngster Divock Origi, who scored a hat-trick a week ago in the Capital One Cup demolition of Southampton, is in line to start in a match Liverpool only have to draw to top their group, having qualified in their previous match.

“As a striker it is always important to be effective and score goals. For me I am happy I can continue and I’m excited for the next games,” said the Belgium international.

“As a young player you can improve on everything – if I am here it is because I deserve to be here but I have to maximise my potential.

“I think for me it will be a new opportunity for me to prove myself and I will be ready if the coach needs me.”