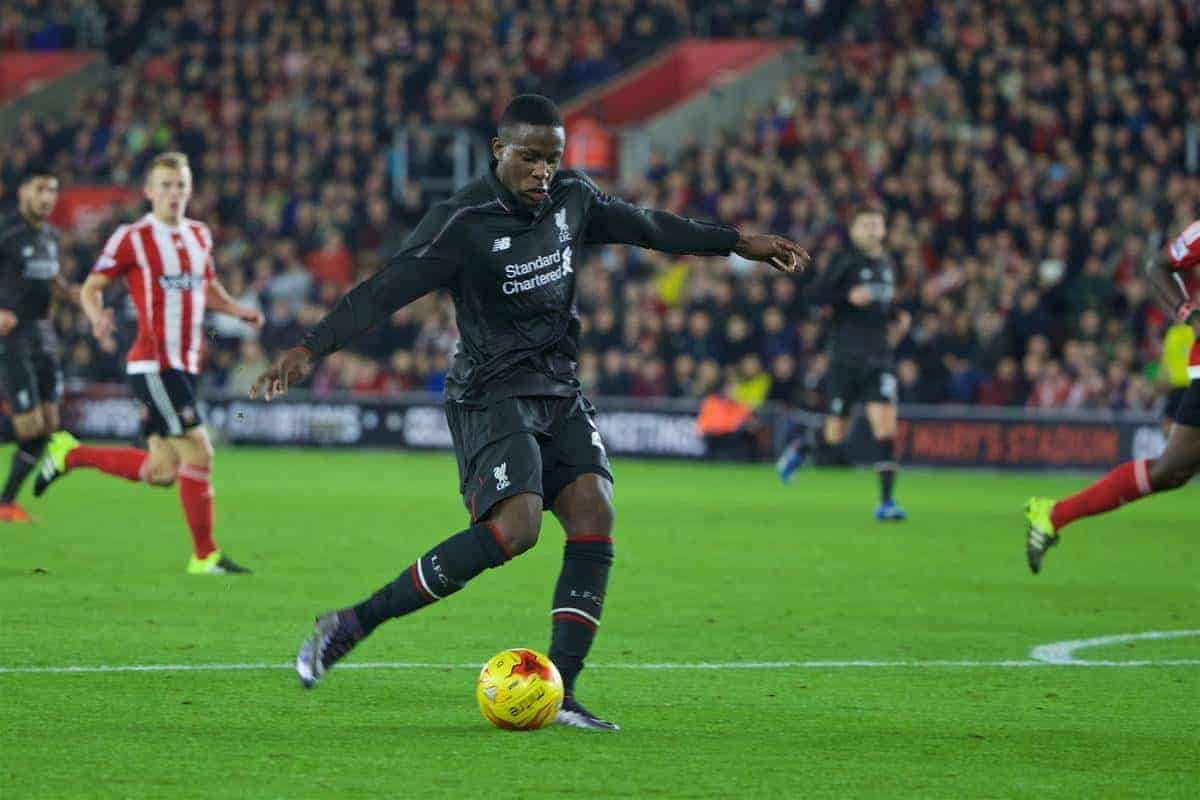 Divock Origi‘s hat-trick in Liverpool’s 6-1 League Cup mauling of Southampton goes to show that patience is a virtue with young players.

It was a balmy night on the south coast as Jurgen Klopp once again inspired his side to a stunning away win against one of the Premier League‘s stronger sides.

The quarter-final victory was arguably every bit as good as the recent triumphs at Chelsea and Man City and once again showed what a force Liverpool are becoming under Klopp.

Daniel Sturridge will understandably make the headlines because of his well-taken double on his first start since October, but the performance of Origi was intriguing. The 20-year-old scored a hat-trick on the night – Alberto Moreno‘s first-half effort was eventually awarded to him – and outlined what potential he has.

His second goal was a thunderous strike that sent the travelling supporters into raptures and showed his genuine quality.

Receiving the ball on the right-hand side of the area, the Belgian rifled a shot past the despairing dive of Maarten Stekelenburg, putting Liverpool 4-1 up in the process.

It killed the game as a contest, and was the standout goal on a night littered with emphatic finishes.

Origi’s hat-trick goal was more clinical than anything, with the big striker perfectly placed to head home Brad Smith’s inch-perfect cross. That made it 6-1, and ensured Origi took home the match ball.

On paper, it may look as though he enjoyed a stunning evening from start to finish, but that was simply not the case.

His second goal, which at the time we all thought was his first, gave him so much self-belief.

It cannot be stressed enough just how important confidence is to any footballer and any team.

The belief that Klopp has instilled in this side is quite remarkable, and they are becoming specialists at overturning deficits away from home.

If the Southampton game had come at the end of Brendan Rodgers’ reign, there is no way Liverpool would have reached the semi-finals once Sadio Mane‘s first-minute header flew in. There was no conviction back then.

Origi is the perfect example of how enormous confidence is. By the end of the game he genuinely looked a completely different player to the one that started proceedings.

He was not having an impressive night for at least half of the game. His movement was lacking and he was generally offering very little in terms of an attacking threat.

One sluggish touch in the first-half, having been found by Joe Allen in a dangerous area, summed up his opening 45 minutes.

Origi scored that scorching second-half strike, however, and we suddenly saw what a talented young footballer he is. This was the player Vincent Kompany claimed will become a world-beater in years to come.

There was suddenly a swagger about him that hasn’t existed in a Reds shirt to date, with one arrogant back-heel late in the day proof of that.

The confidence that this night will given him can only bode well for the future.

Because of his reputation, Liverpool fans have probably been overly expectant of Origi since his return from a loan spell at Lille last season.

At 20, he is still a player very much improving, and the rawness to his game is to be expected of a player of his tender years.

The Belgium international is the same age as Jordon Ibe and Connor Randall, give or take a few months, which puts things into perspective.

He had yet to convince for the Reds until tonight, but the trust and patience that Klopp has showed in him has paid dividends.

So pleased for Origi. I took a lot of stick defending him early in the season, but you have to give young players time, esp. imports.

Football fans can be too impatient these days and young players can be written off embarrassingly early by some.

Raheem Sterling had it last season, Ibe endured it prior to Klopp’s arrival and Origi has certainly been hailed as a flop on numerous occasions since the summer.

The former Lille man has enormous ability and potential, and in Klopp, he is working with quite possibly the best nurturer of young talent in the business.

Origi showed his quality for Liverpool on Wednesday night, but don’t expect it to be plain sailing from this point on.

That would be completely unfair.