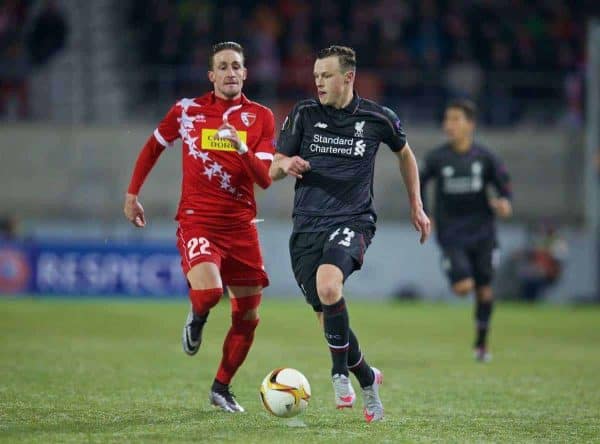 No goals scored, no goals conceded, and no obvious man-of-the-match in what would have been one to miss for the neutral – but there were plenty of talking points from the Reds’ 0-0 draw with Sion.

The Brazilian’s poor run of form since his heroics against Manchester City continued here in Switzerland, as he struggled to combine with his team-mates and repeatedly gave the ball away.

Even though some of his poor play against Newcastle on Sunday was down to the lack of movement from those around him, there can be no excuses for poor touches and careless passing which continued into the game against Sion.

Firmino gave the ball away six times during the game and completed 79% of his passes. Those unfortunate enough to witness the game might be surprised that the latter statistic is so high!

That said, despite this poor run he’s still always looking for the ball, always providing an option, and has shown enough natural ability to suggest that this current state is just a blip, and that the Hoffenheim Firmino will eventually be seen in a Liverpool shirt.

He’s not the worst player in the team at the moment, as James Milner‘s dire form continues, but the Brazilian plays an important role in the side, and needs to begin to show the quality he obviously has.

Emre Can has become vital to Liverpool’s midfield

Liverpool’s German international all-rounder was suspended for the loss against Newcastle on Sunday and, as is often the case, the qualities a player brings to a side are more noticeable when they’re not in the team.

Back in the side in a holding role here against Sion, Can dictates the game and provides a platform from which the rest of the team can build.

Even though it wasn’t a stand-out performance from Can, the fact he’s back in the picture is encouraging, and as he went down holding his ankle in the first half there would have been a few worried onlookers.

Liverpool lacked a dominant midfielder against Newcastle, and even if the holding midfield position is occupied by Lucas, Can will offer drive from midfield in a box-to-box role. He’s has the ability to take a game by the scruff of the neck, when others might go missing.

With Jordan Henderson fit and captaining the side again, he and Can should form the engine room of Klopp’s red machine, offering a combination of dynamism, guile, tenacity, technical ability, and most importantly the ability to run a midfield.

Liverpool went into this season with a lack of depth at fullback which could almost be described as negligent.

Nathaniel Clyne joined the club to replace the outgoing Glen Johnson, but the new signing from Southampton was the only natural right-back in the first team squad. Promising Spaniard Javier Manquillo saw his two-year loan deal cancelled after a year, while young Joe Gomez natural position is centre-back.

Over on the left, Alberto Moreno faced a similar situation to Clyne, with only José Enrique – wherever he is – as “competition” for his place.

Then against Southampton, a cameo from Brad Smith gave Moreno a well-earned rest, and the Australian international’s display of raw talent was pleasantly surprising.

His perfect cross, the type which followers of the Liverpool u21s will have seen before, set up Origi’s hat-trick goal, and he also gave a taster of his blistering pace.

Starting his first game for the club against Sion tonight, continuing the remarkable turnaround in his Liverpool career, he showed more of the same. Though his crossing was inconsistent there were encouraging signs that he can do a job for the team in both attack and defence, and give Moreno a break once in a while.

Jordan Rossiter is back

Klopp’s anger at the FA for playing Jordan Rossiter in three games in five days for England u19s demonstrated early in his Liverpool tenure how highly he rates the Liverpool academy product.

Back in October the German was describing him as a “big talent”, and criticized the FA, saying that: “these young players are our future. If we handle them like horses than they will be horses.”

This faith from the manager was on show again tonight, as Rossiter replaced captain Jordan Henderson with around fifteen minutes remaining in the tough conditions in Sion.

The nineteen-year-old operated in front of the back four, and should provide an option in this position in future games, either as a lone defensive midfielder or as part of a double pivot.

With the games coming thick and fast over Christmas, and progress in the League Cup and  Europa League meaning even more games in the new year, the local boy could be in the photograph more regularly in the coming months.

There wasn’t much to talk about…

Liverpool topped their group at a canter, appearing happy to pick up the draw and escape with no further injury problems.

FC Sion did well to qualify as runners up in the group, celebrating the dull 0-0 at home as if it were a victory, and so they should. They emerged from pot four of the draw, and were considered the weakest team in the group.