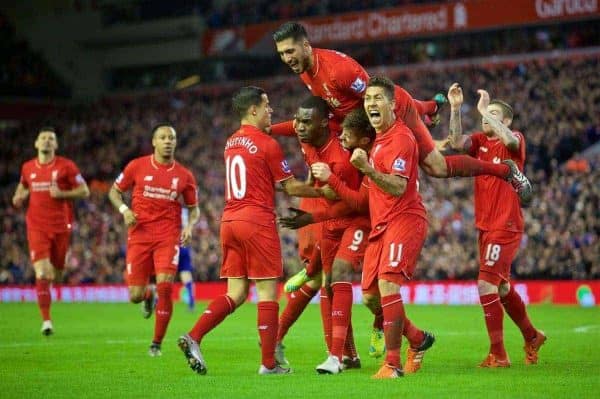 Following Liverpool’s 1-0 win against Leicester City on Boxing Day, we round-up the best newspaper reaction from the Reds’ crucial victory.

Liverpool are up to eighth in the Premier League, having dispatched of Claudio Ranieri’s league leaders on Merseyside.

Christian Benteke scored the only goal of the game in the second-half, as Jurgen Klopp‘s side won for the first time since they thrashed Southampton 6-1 in the League Cup at the start of the month.

Here is how some of the country’s top journalists saw the game:

James Pearce of the Liverpool Echo lauded the hosts’ performance, following some woeful form of late:

This was a world away from the lifeless capitulation at Vicarage Road a week earlier.

Klopp got the response he had demanded as Liverpool tossed their December woes aside by ending Leicester City‘s three-month unbeaten run.

The Reds deserved the scalp of the surprise Premier League leaders as they re-ignited their push for the Champions League spots after a miserable return of one point out of the previous nine.

Having stood accused of lacking the stomach for a fight against Watford, this time there could be no such complaints as Klopp’s men delivered a performance brimming with desire and commitment.

The sight of Liverpool out-working their opponents was a welcome throwback to the early days of the German’s reign.

The Daily Mail‘s Dominic King believes that, although the match-winner on the day, Benteke must still improve greatly, singling out his laughable late miss as proof of this:

So the pep talk had an effect. Having been told by Jurgen Klopp what he needs to do to become a permanent starter, Christian Benteke walked off Anfield’s pitch as Liverpool’s matchwinner.

With a hamstring injury to Divock Origi in the first half giving Benteke a chance earlier than he might have expected, the £32.5million signing scored the only goal of the game to end Leicester City’s 10-game unbeaten run and secure three much needed points for Liverpool.

But, as ever with Liverpool, the full story is different to the raw fact. Yes, Benteke’s sixth goal of his debut campaign on Merseyside was the difference, but it was the opportunity he unbelievably squandered in injury time that shows Klopp’s work is not yet done.

Somehow, with the Kop goal gaping and Leicester keeper Kasper Schmeichel nowhere to be seen, Benteke contrived to miss from 10 yards. The disbelieving reaction inside the stadium, as his shot rolled into Wes Morgan, said everything. This particular jury remains out on his worth.

Chris Bascombe of the Telegraph was another who focussed on Benteke, admitting that for all his current faults, he is a natural born goalscorer:

It was Benteke’s sixth goal in a Liverpool jersey, and it would be premature to describe this as a turning point, but he has continued to fire intermittently.

He’d have had another but for a hapless attempt to find the empty net in the fourth minute of injury time, somehow contriving to shoot at Wes Morgan’s thigh when Schmeichel was caught upfield trying to equalise from a corner.

It’s been that sort of Liverpool career for Benteke, the smooth overshadowed by the rough. That the final image of this game was so awkward demonstrated how much improvement is still needed.

Benteke was only on the pitch for his winner due to the misfortune of Divock Origi. Klopp’s decision to favour the younger of his Belgians looked justified in the early stages, as Origi harassed Morgan and Robert Huth, twice outpacing the centre-halves before shooting powerfully, most significantly when provoking Schmeichel into a 25th minute save.

Sadly for the youngster, his exertions took their toll when he was forced off with what a hamstring problem, ushering Benteke into the action.

Leicester’s defenders seemed happier dealing with the static striker than the nippy Origi, but whatever Benteke’s limitations he needs no sat-nav to direct him to goal.

Andy Kelly of the Echo understandably gushed over the inspirational performance of Jordan Henderson, with the captain superb from start to finish:

He’s been ‘back’ for a few weeks of course but this was the game when Jordan Henderson really arrived back in a red shirt.

He brought his full repertoire – goals apart (somehow) – to the table and he had to, because the Leicester midfield was a difficult nut to crack as the Reds secured their first win in five.

N’Golo Kante in particular showed great pace and skill and it was only Henderson among the home players who had the athleticism to cope with him, the Liverpool captain dispossessing him twice in immaculate fashion.

Some first time passes brought half chances first half while his curling cross to Christian Benteke in front of the Kop deserved better than the rising header it got.

It was fitting that it was his head that rose to meet Leicester‘s late, late long throw with a crucial clearance. He was, after all, head and shoulders above for most of the match.

It was Henderson who most impressed David Usher in his ESPN player ratings, although he also had plenty of praise for defenders Dejan Lovren and Nathaniel Clyne:

Henderson – The skipper led by example and popped up all over the pitch. Passed the ball intelligently, tackled well and made several lung-bursting runs off the ball. Should have made more of a great opportunity late on when he elected to pass rather than shoot and failed to find either of the two wide-open teammates he had up in support.

Lovren – Excellent display from the Croatian, who was sorely missed last week at Watford. Leicester had not been shut out all season until Boxing Day, but they rarely looked as thought they’d breach a Liverpool backline marshalled superbly by Lovren, who seemed to get his head on almost every cross that came into the box. Also made numerous timely challenges. With Martin Skrtel ruled out for a number of weeks, this is an opportunity for Lovren to cement his place in the side alongside Mamadou Sakho — and this was a great way to start.

Clyne – A typical Clyne performance. Solid defending and lots of energy as he provided a reliable outlet down the right. Had the crowd on their feet in the first half after some great covering to snuff out what could have been a dangerous Leicester counter-attack. He’s so good in one-on-one situations that opposing wingers rarely even try to test him on the outside these days.

Finally, Paul Joyce of the Express believes top four is now a realistic aim for the Reds, and feels the Anfield atmosphere is much improved:

If Liverpool can muster some momentum, string together some back to back victories, then a Champions League berth is not beyond them.

Their hopes will also require a wobble from either Tottenham, or Leicester, but a five point gap to fourth position cannot be viewed as insurmountable. Next up is Sunderland when Klopp’s side can expect the sort of physical test they have shirked in recent matches.

Klopp has been working on improving the atmosphere at Anfield: Whether by openly questioning why some supporters were leaving early or the manner in which he gathered his players together following the 2-2 draw with West Brom before telling them to bow in appreciation in front of the Kop.

Whatever the tactic, his efforts are working. This famous old stadium was noisier than for some time, especially in the opening 20 minutes. That the visiting Leicester supporters still sang, ‘Is this a library?’ shows just how bad things have been before.