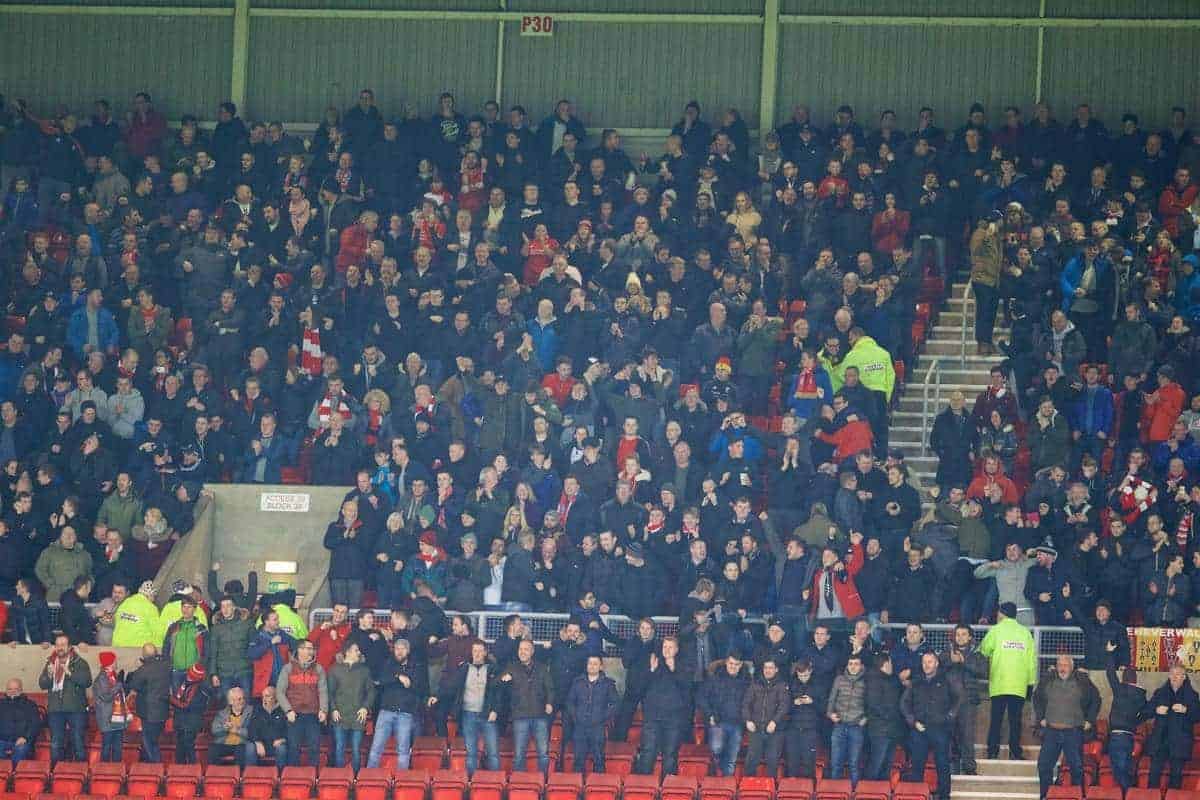 Though by the narrowest of margins, Liverpool recorded another vital victory away to Sunderland on Wednesday, and here we bring the best of the reaction from social media. It took one goal from Christian Benteke to secure a priceless three points for Liverpool once again, in a game fraught with poor touches and misguided, long-range efforts.

Though not the most convincing of performances from the Reds, a 1-0 win away to Sam Allardyce’s Sunderland will be cherished by Jurgen Klopp and his side.

The German named a strong starting lineup for the trip to the Stadium of Light, though there was little in terms of game-changing quality on the substitutes’ bench.

Whether or not Klopp was hoping to do any rotation he's not exactly got a squad available to do much rotating with.

That bench is grim. https://t.co/NunuPR3w9P

When Benteke and his team-mates made their way out onto the pitch, surprisingly much of the focus was on Liverpool’s lesser-spotted black kit—complete, for the evening, with white socks.

Roberto Firmino was the first player to trouble Vito Mannone in the Sunderland goal, fizzing a long-range effort onto the post via the Italian’s fingertips.

Better from Firmino, about time

Christ …. that Firmino shot nearly made me wee

This proved to be the best chance of the first half however, leaving little in terms of encouragement for supporters.

Need to play more direct and with greater intensity. Played like the team were already leading. #LFC

Play Firmino up front and bring Ibe on, all a bit too slow. Coutinho dropping deep but has too much to do

That all changed less than 30 seconds after the interval, as Benteke slotted home beyond Mannone after a lucky pass from Adam Lallana.

He did it, he scored a straightforward chance. Yes bentekkers!!!!

Second successive game in which Benteke's been rubbish but scored. Makes for an interesting division of opinion. #LFC

It's clear, Twitter reverse psychology works on Benteke. Everyone abuse him, constantly, and he'll score

Benteke has this annoying habit of being awful but still managing to score.

After seeing Sunderland‘s Jack Rodwell withdrawn through injury before the half-hour mark, Liverpool supporters were disappointed to see their own midfield dynamo, Jordan Henderson, trudge off just over 30 minutes later.

Fingers crossed that's not another bad injury for Henderson…

Hope Henderson's discomfort is nothing serious. #LFC can ill afford another major injury to an instrumental player at such an important time

Without Henderson, Liverpool lacked impetus in the final third, with Philippe Coutinho reverting to his worrying, hit-and-hope approach from the outside the penalty area.

Coutinho needs to start passing. He's better at that than shooting.

The travelling Kop, in great voice throughout, howled at referee Kevin Friend following a horrific challenge from Jeremain Lens on Mamadou Sakho.

If Friend is consistent he'll send Lens off for that. He books him. Doesn't even make him fill in the hole he dug in the pitch.

That's why they are called hospital passes.

Refs had an absolute mare. That's a red card, wasn't in control of the tackle whatsoever.

Fortunately, Sakho came away unscathed, and the game played out to a comfortable 1-0 win for Liverpool.

Never in trouble, controlled their possession. Created some nice chances, I like how we're developing

3 points, doesn't really matter about the performance now! Should have scored a few more, important we put on a little run now

Liverpool are now set to take on West Ham United on January 2, with the trip to the Boleyn Ground representing another opportunity to gain ground in the race for the top four.