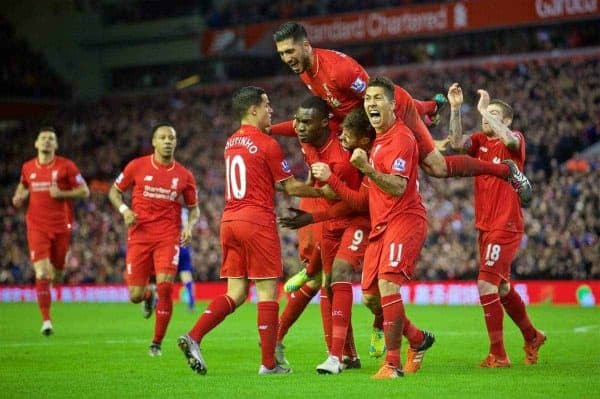 With the Premier League season at its halfway stage, we assess the performances of each Liverpool player to date in 2015/16.

The Reds’ 1-0 win at Sunderland on Wednesday evening was their 19th league game of the campaign, and it has been a fairly forgettable four months or so.

The arrival of Jurgen Klopp has clearly been the one enormous plus point of 2015/16 so far, but performances and results need to improve drastically in 2016.

In terms of individuals, there have been some standout performers and some who have struggled. Certain new signings have fared better than others, while established names have also been an eclectic mix of good, bad and awful.

Here is how each Liverpool player has done at the halfway point in the season.

The Belgian has once again divided opinion between supporters, with many feeling he is just not quite good enough to be Liverpool’s first-choice goalkeeper.

The 27-year-old has been both good and bad, in truth, with important saves in the wins at Chelsea and Man City high points, and an error at home to West Brom a moment he will want to forget. Far from perfect, but half-decent.

Bogdan was signed on a free transfer from Bolton in the summer, and has only made four appearances to date.

The Hungarian was given a chance to shine at Watford, following an injury to Mignolet, but he blew his big opportunity, making an early howler. Liverpool should have a better back-up ‘keeper.

Clyne has very much been Mr Steady since his arrival from Southampton, bringing defensive expertise and consistency to a right-back position that has been an issue for the Reds in recent times.

The England international has been almost faultless in terms of defending, but a bit more quality in the final third is needed.

No Liverpool player has played in more games (26) so far this season.

Having been criminally left out of the side by Brendan Rodgers, Sakho was magnificent in the early weeks of Klopp’s reign, bringing great all-round quality to the centre of the defence.

A knee injury curtailed the 25-year-old’s progress, and upon his return, he played poorly at Watford and shakily at home to Leicester. Liverpool’s best centre-back returned to the top of his game against Sunderland, however.

Skrtel has had a typical Skrtel season so far. At times he has been excellent, but more often than not, he has been the weak-link in Liverpool’s defence, showing poor positional sense and a lack of leadership.

His goal at Man City was a standout moment.

It has taken too long, but Lovren is finally starting to look like the defender Liverpool hoped to see when they signed him for big money last year.

The 26-year-old endured a miserable afternoon against West Ham in August, but other than that, he has been a model of consistency. The Croatian is in a promising run of form currently.

The hugely popular Ivorian has only featured seven times this season – just two substitute appearances in the league – and he has been solid enough. He is clearly not the player he once was, though.

Like Sakho, Moreno was out of favour under Rodgers but has thrived under Klopp.

The young Spaniard has been one of Liverpool’s best players since October, bringing pace and quality down the left and showing an improvement defensively. A few lapses at the back have been evident, though.

Gomez was impressing greatly at left-back in the early stages of the campaign, but a cruciate ligament injury cruelly ended the youngster’s season in October.

Lucas has come a long way since his dark early days at Anfield, and there have been times when he has looked imperious at the heart of Liverpool’s midfield.

The 28-year-old has struggled in recent weeks, after some outstanding performances in the Autumn, but he remains the only quality holding midfielder the Reds have in their ranks.

The 21-year-old is a divisive player, but on the whole, he has really grown into his central midfield role this season. Like any young player, consistency has been an issue.

Can possesses great natural ability, as proven by outrageous assists against Man City and Southampton, but there are times when a lack of discipline in the middle of the park has been evident.

He will only get better, which is an exciting thought for any Liverpool supporter.

Henderson has only made eight appearances because of a three-month injury lay-off, but having him back in the side has made a big difference.

The captain was Liverpool’s man of the match in the Boxing Day win over Leicester City, but he worryingly limped off against former club Sunderland on Wednesday evening.

It has all been a bit of a struggle for Milner, who has just not produced the quality many expected him when he joined from Man City.

The admirable work-rate has been there for all to see, but the 29-year-old has lacked influence in a more central role.

2016 and beyond needs to be better if Milner is to be a regular.

The Welshman has failed to nail down a starting berth in midfield, but whenever he has been used, he has shown quality on the ball and underrated defensive nous.

Allen will never be a favourite of the fans, but he is a lot better than many give him credit for.

The teenager has featured very little, partly due to injury, but he has not looked out of his depth when called upon.

Coutinho is arguably Liverpool’s most gifted footballer, and while he hasn’t always found his best form in 2015/16, he has been his side’s talisman on a number of occasions.

The Brazilian has scored crucial goals against Chelsea, Man City and Stoke, and his creativity and invention have often been a joy to watch.

Less shooting from distance would be nice.

Lallana should be so much better than he is, and his ability to flatter to deceive has often been very frustrating this season.

The 27-year-old has produced glimpses of class, and has adapted well to Klopp’s style of play, but he needs to start producing far more goals and assists.

A lovely solo effort away to Bordeaux was a high point.

Ibe showed worrying form at the start of the campaign, but like numerous players, he has shone since Klopp’s arrival in early October. His first Liverpool goal was a very well-taken effort, away to Rubin Kazan.

The Englishman is the only genuine wide man in the Reds’ squad, and his pace and power have been a useful outlet at times.

His final ball needs to improve greatly, but that will come with age.

Firmino has been a big disappointment at Liverpool thus far, with the Brazilian arguably only playing well in two games, against Bournemouth in the League Cup and Man City in the Premier League.

The 24-year-old is clearly a very talented player, but his quality, influence and end product must start hitting the heights they did at Hoffenheim.

Were it not for chronic luck with injuries, Sturridge would likely have been Liverpool’s star man so far this season.

The 26-year-old has only made six appearances, but he has shown what a prolific striker he is in that time. His double in the League Cup at Southampton, and at home to Aston Villa in the league, were sheer class.

Like Milner and Firmino, Benteke has not impressed yet in a Reds shirt.

The Belgian may have scored a fairly respectable seven goals in 19 matches, including back-to-back winners in recent matches, but his movement has been poor, his work-rate lacking and his overall impact not good enough.

The highly-rated Belgium international looked well out his depth until weeks, but he has started to show what a promising young striker he is.

Origi’s first Liverpool goal was a cracker at Southampton, and his hat-trick that night injected him with great confidence. The 20-year-old is still very raw, but has a big future.

Ings was becoming a real crowd favourite in the early part of the season, with his likeable persona and impact on the pitch – three goals in eight games – making him very popular.

The 23-year-old picked up a serious knee injury in October, though, and he has been a big loss. There is an infectious nature about him that should really thrive under Klopp once Ings is fit again.