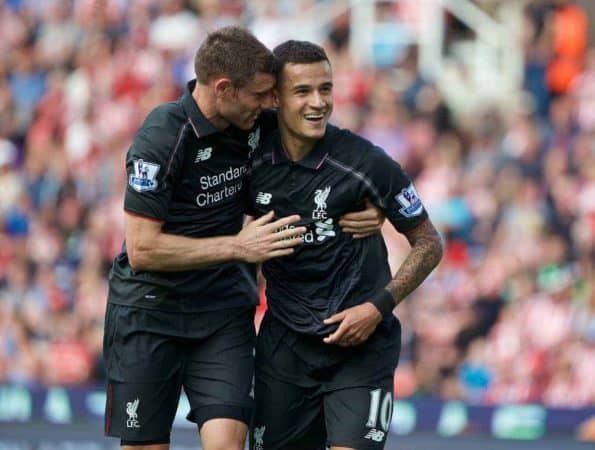 Closing in on the three-year anniversary of his arrival at Liverpool, Philippe Coutinho says he is targeting silverware this season.

Coutinho joined from Inter Milan in January of 2013, in a deal worth £8.5 million, and has quickly become one of the club’s key players.

Links with Real Madrid and Barcelona earlier this season underlined Coutinho’s quality, but speaking on the eve of the three-year anniversary of his move to Merseyside, the Brazilian committed his future to chasing trophies in a Reds shirt.

“As I’ve said, in the beginning I was given a very warm welcome, from the fans, the team, everyone who works here at the club.

“So I’m very grateful to the club, and now I hope to be able to help the team win trophies, it’s very important to keep battling.

“We learn little by little.

“When you arrive here, the football is very different, the style of play, it’s more intense, you use your body more, it’s faster.

“These things I think I’ve improved on since I arrived, as I came from a different style of football, and I hope I can continue to improve.”

For Liverpool to secure the future of this prodigious talent, it is likely that Jurgen Klopp must lead his side to silverware.

Having reached the round of 32 in the Europa League, the semi-finals of the League Cup and harbouring ambitions of a strong run in both the FA Cup and the Premier League, Coutinho believes they are in “good position” to do so.

“It’s the goal of everyone involved, we’re all focused on fighting for the trophies and I think we have a great chance in the competitions we’re in this year.

“We’re going to fight for that and I hope we win a trophy this year.”

The Brazilian’s performances in the No. 10 role will be central to this, with his creativity and guile serving as Liverpool’s most important attacking function so far this season.

Klopp will be hoping that Coutinho’s ambition does not surpass the club in the future.

Having outlined his objectives in his third year at the club, Coutinho has provided an important mission statement to his team-mates.