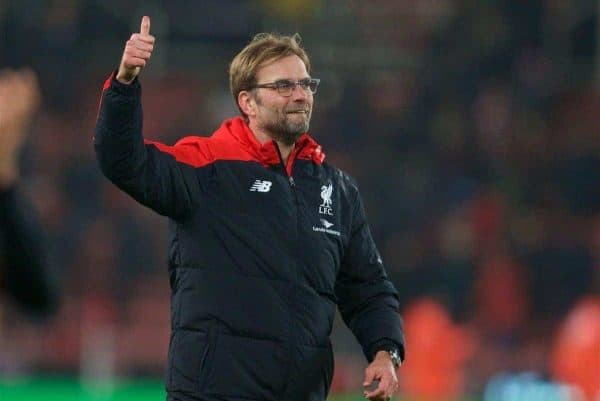 With the winter transfer window in full flow and the chance for Jurgen Klopp to make adjustments to his squad, we take a look at what the Reds boss should prioritise on his to-do list.

From Klopp’s first day at Anfield he has constantly played down the need to be busy in January, defiant in his desire to allow those he inherited to prove their worth.

But recent indifferent form, poor performances and on-going injury crisis have forced the Liverpool boss to rethink his initial plans, with his squad in desperate need of bodies and an all-round overhaul.

So what should the Reds leader move to do this month?

Due to the injury crisis that sees Liverpool currently without a first team ready centre-back bar Kolo Toure, Klopp should certainly move to bring Neven Subotic to Anfield.

With Martin Skrtel, Mamadou Sakho and Dejan Lovren facing spells out, only talented but inexperienced options like Tiago Ilori to call upon, and the prospect of Lucas having to play centre-half, signing the Serbian for a third time should be priority for the German.

Though his best years may be behind him, Subotic’s top level experience, wining mentality – a Bundesliga champion and Champions League finalist – and long-standing relationship with Klopp make him the ideal short-term candidate to fill-in at a vital time.

His current peripheral role at Borussia Dortmund is likely to see the 27-year-old available for a relatively small fee, and signing him would ease the defensive crisis while also allowing Klopp time to find the right long-term option without having to rush into deals this month.

Alongside bringing the physically imposing defender to Merseyside, negotiating an early recall for Andre Wisdom from an unproductive loan at Norwich should also be targeted, with the 22-year-old able to provide cover at full-back and central defence.

Klopp undoubtedly needs to recruit a long-term centre-back, or two, going forward, but reuniting with Subotic – and possibly Wisdom – should be a priority this January.

With no changes set to be made with the goalkeeping department, Klopp must turn his focus to strengthening his defensive midfield options.

The key area has not been addressed for years at Anfield, but finally it must with the Reds suffering consequences of being without genuine anchoring quality all too regularly.

Lucas showed some excellent form upon Klopp’s arrival but his sporadic good displays and limitations – such as his athleticism and distribution – too often outweigh the intermittent positives he brings, and for someone of his experience, what he offers isn’t enough.

Emre Can has deputised well when required but he has more to offer with his ability to power forward, while Jordan Henderson’s qualities are restricted when utilised in a deeper role and James Milner isn’t the right man to fill the spot.

Joe Allen seems unfancied having played little football since Klopp arrived, while first signing Marko Grujic isn’t here, so an upgrade and long-term solution who is strong, quick, danger-aware and a good distributor of the ball, preferably with some presence, is needed.

Now may not be viewed as the time to sort the position, but the prospect of Lucas in defence and the need for Klopp to focus on the long-term alongside current issues make it the perfect time to consider Sporting Lisbon’s William Carvalho, or test Southampton’s resolve over Victor Wanyama.

Liverpool have a key part of the season coming up, and a new defensive midfielder would help the Reds in a vital period.

After failing to fit in at Anfield following a big-money summer move, Robbie Keane was instantly shipped back out at the first available opportunity just six months later.

Klopp should be similarly ruthless with Benteke this month, with the Belgian’s future already looking bleak following his relegation to the bench for the League Cup win at Stoke despite being the only natural striker available, and his FA Cup start with the kids against Exeter.

With Benteke being completely at odds and a hindrance to the way Klopp wants to set-up, it’s a relationship that will never work, so the issue of his Anfield future may as well be dealt with sooner rather than later.

While his goals have proven handy – we are certainly grateful – his overall contribution is not enough nor what Klopp is looking for, and it’s clear the team won’t be built around the £32.5million man as he needs, with Liverpool having looked consistently better without him all season.

Liverpool need a suited, top quality option to be able to rely upon to fit in and perform as well as find the net in the absence of Daniel Sturridge in particular, which Benteke has proven he can’t provide, making keeping him a pointless exercise.

In order to sign an adequate option, Klopp may have to raise funds, and cutting losses on Benteke is the way to solve that – his seven goals in 15 starts despite being in an unsuited set-up will undoubtedly attract suitors who feel they can bring more out of him.

If a similarly reasonable fee to the £16million total recouped for Keane can be found, Klopp should take the money – if the Belgian takes the deal – and use it towards finding a compatible striker.