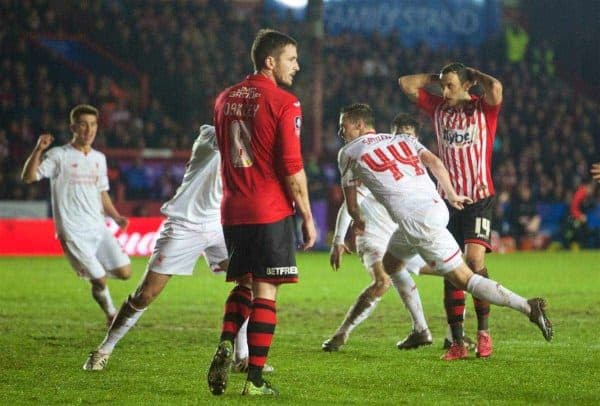 Liverpool drew 2-2 with Exeter City in the FA Cup third round on Friday evening, with Brad Smith’s second-half goal taking the tie to a replay.

Jurgen Klopp selected an incredibly inexperienced side for the trip to Exeter, but it was forced upon the German because of horrific luck with injuries currently.

The Reds manager made 11 changes to the side that won 1-0 at Stoke City in the League Cup on Tuesday, with Adam Bogdan Jose Enrique and Christian Benteke the only players over 22 years of age.

Connor Randall, Tiagi Ilori and Smith all started at the back, while Kevin Stewart, Cameron Brannagan, Joao Teixeira, Ryan Kent and Jerome Sinclair all came in too.

Ilori, Stewart and Kent have all just returned from loan spells, and the trio all made their Liverpool debuts.

It was an even opening to the game, and there was a real feel of a classic old-school FA Cup tie about proceedings.

Liverpool were behind in just the ninth minute. Striker Tom Nichols stole in at the back post to send St James Park wild with joy. It was always going to be a tough night for the Reds, but it had suddenly become far trickier.

It was 1-1 just three minutes later, as Sinclair scored his first ever Liverpool goal with a crisp finish from seven yards out. Relief.

Randall hit an angled effort wide shortly after, as Klopp’s youngsters took control of the game. David Noble almost put the hosts back ahead near the half-hour mark, but skied over the crossbar.

On the stroke of half-time, disaster struck for Bogdan, just as it had against Watford. The Hungarian flapped at Lee Holmes’ corner, and allowed it to go straight in. 2-1 Exeter.

It was the final moment of a frantic half, and Klopp needed to gee up his players during the interval.

Exeter had an early shout for a penalty, but referee Stuart Attwell correctly said no, as it was revealed Ribeiro had tripped himself inside the area.

Olejnik made a fantastic save to deny Benteke from point-blank range, as Liverpool desperately pressed for an equaliser. Pedro Chirivella replaced Kent after 57 minutes.

The Reds had almost none of the ball in the opening 20 minutes of the half, and their lack of maturity was becoming increasingly telling.

Fortunately, Liverpool were undeservedly level with 17 minutes remaining. A poor Exeter clearance fell to Smith, and the left-back finished instinctively.

The remainder of the game was fairly unforgettable, in truth, and in the end, both teams seemed relatively satisfied with a draw. They will do battle once again at Anfield later this month.