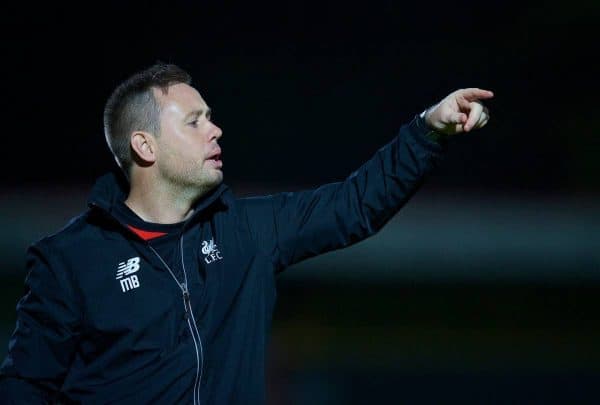 Liverpool under-21s boss Michael Beale speaks to This Is Anfield about youth development, the loan system, and how nervous he was when seven academy players lined up against Exeter City in the FA Cup.

We meet with Beale, who was appointed to under-21s boss in August 2014, on a cold Saturday morning at the club’s academy base in Kirkby. It’s the first big freeze of the season, meaning pitches are frozen and last minute changes are required for training that will now take place indoors.

With the first-team squad in action the next day, and the FA Cup third round replay against Exeter City to follow days later, many of Liverpool’s under-21s are instead over at Melwood.

After training, Beale shows a board where he moves players across from one category to another, depending on whether they’re available to him – there’s loaned, injured, Melwood and internationals to contend with, meaning Beale rarely, if ever, has the full under-21s squad to work with.

It’s for this reason that little attention is paid to the league table in the Premier League under-21s. A year ago, the Reds’ youngsters were well placed to win the ‘title’ but a host of players went out on loan at the end of the campaign and Liverpool finished second.

This season, the Reds are 11th (second from bottom) having won twice in 11 Premier League under-21 games. But this isn’t what Beale or the club’s academy are judged upon.

“We’re doing a better job this year, than last, as we have more players being used by the first-team – playing and training with the first-team,” says Beale.

“Nearly all of last year’s under 21 group has gone on to make either a Liverpool debut or a league debut on loan. We are extremely proud of this progression and as a group of players and staff we celebrate each of the player’s successes.

“As a group, we are very much a family who are pushing each other to the next challenge. When we have all of our boys together, then we have no doubts that we are as strong as any team in England [at this level].”

Indeed, 10 academy players featured in the 2-2 draw against Exeter City a fortnight ago, with four of them being handed their debut for the club.

“I was extremely nervous for that game,” says Beale – who wasn’t able to attend the match as the under-21s had their own game the next day.

“We could have won there on another day, but the team was put together so late and had little time to work together, Sheyi (Ojo) only returned two days before it, and Tiago (Ilori) the same. Kevin (Stewart) played his first 90 minutes since September just three days before in a friendly against Morecambe.

“I am looking forward to the replay and hopefully one or two boys making a name for themselves.

On the scoresheet in Devon were striker Jerome Sinclair and left-back Brad Smith.

“It was an outstanding moment to see Smith and Sinclair score for the first team,” says a proud Beale.

“It’s also worth mentioning that Ryan Kent has been with the club since he was 6 years old and to make your debut for the Liverpool first team is a huge personal moment for him. It is a privilege to be guiding these young men on their journeys to become top players.”

But it’s not just in games where the academy squad assist the first-team squad, with under-21s regularly at Melwood. “If the first-team win, and we have academy players training with them that week, we’re part of that success,” explains Beale.

Much has been made of the return of several players from loan, with Jurgen Klopp discussing perhaps the need for less players to be loaned out and instead for them to develop as a team in the under-21s.

But Beale explains how beneficial the loan system can be – allowing young players to get their first taste of professional football.

“We believe it is crucial that young players are playing games on a regular basis. The current under 21 league doesn’t provide enough games alone, therefore, we plan up to 20 additional games to fill the schedule or use the loans system as a way of providing players with a regular games programme.”

The Reds’ academy uses the loan system as a solution to bridging the gap between the u21s and the first-team, something that does not exist in England compared to other European countries.

“We know what we can and cannot provide a young player. We cannot guarantee games inside a stadium with passionate support or mixing day to day within a mens dressing room (our average age is 19 years old in the under 21 squad).

“However, if the manager is keen on working with the players and having them around the first team then we would always take this option first. This has been the case this season with Rossiter, Randall, Smith, Fulton and Brannagan. In all cases, this decision is made on an individual basis,” explains Beale.

The loan system, therefore, is used to get young players in a senior team environment, both in terms of playing and socially.

After training, Beale takes the squad to the side to impress upon them tactical details from his previous two days working alongside Klopp at Melwood. The squad know there’s an opportunity there for them if they can take on board what’s being asked of them.

“If we can provide a player to the first-team squad, it can save the club millions, it makes economic sense and here we have a manager and owners who want the academy to succeed.”

Beale, who worked at Chelsea before joining Liverpool in 2012, shows us around the humble surroundings of his office, a small room in a portakabin right next to the changing rooms.

“We’re trying to keep the lads grounded, some clubs have more impressive facilities for the under-21s but we don’t believe in that here, it’s important the academy is seen as a place of work and not a luxurious health club. When a player reaches Melwood full time, then he has graduated from this environment.”

At training that day is Polish goalkeeper Kamil Grabara – a 16-year-old taking part in his second session with the under-21 squad. Not every player knows his name, he arrived that week, in a foreign country, now living with a host family in the city.

The players spend the core of the 90-minute session working on 1 vs. 1 drills, with Beale emphasising the importance of players being able to win their one-v-one battles on the pitch.

“Much of the talk in coaching now is of positional play, but there’s no point being in the correct position if you can’t beat your direct opponent,” says Beale.

Liverpool’s academy are producing players capable of beating their opposition full-back, with Raheem Sterling and Jordon Ibe previously, and now Sheyi Ojo and Ryan Kent, plus Harry Wilson who is yet to make his debut.

Beale will be at Anfield on Wednesday night, with several academy products expected to line up for Klopp’s side again against Exeter City. The under-21s boss knows that a player playing for the first-team is far more important than a win in the under-21 league.