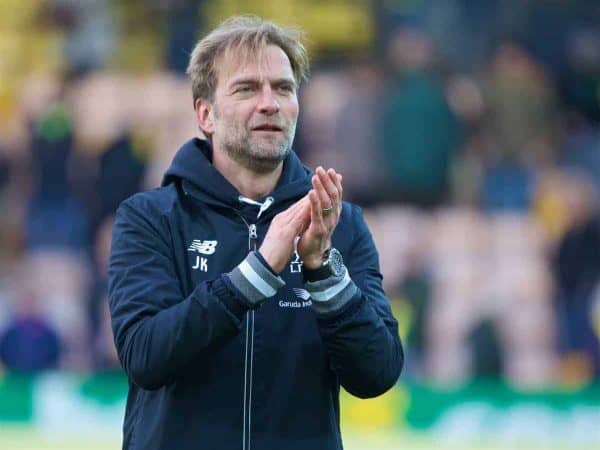 Jurgen Klopp was able to laugh off comical defending after breaking his glasses celebrating Liverpool’s astonishing 5-4 win at Norwich.

Adam Lallana celebrated his stoppage-time winner in the nine-goal thriller at Carrow Road by embracing Klopp, who lost his glasses as the rest of the team joined in.

Asked about the joyous scenes which greeted Liverpool’s first Barclays Premier League win of 2016, Klopp said: “I don’t know, I saw nothing.

“Usually I have a second pair, but I couldn’t find them. It’s really difficult looking for glasses without glasses.”

It was not the first time Klopp’s glasses had been broken during a match, with one damaged pair residing in former club Borussia Dortmund’s museum.

“We won for the first time against Bayern Munich and Nuri Sahin broke my glasses. Today it was Adam,” he added.

“It may sound crazy when I say we defended better today,” Klopp added.

“We’ve made different mistakes. If you win 5-4 it’s a funny story, but it’s not that funny. We have to solve it.

“Today we conceded four goals after set-plays, but we defended them better. We got all the goals after second ball set plays. Things like this can happen.

“That’s how life is: solve one problem and you have another one.

“They do what we have to do, defend the first ball, but because of our history they all stay in the box.

“The first (Norwich) goal, with the heel, you have to be offside if you stay there. It’s unbelievable. It’s not possible.

“I am not happy with this situation, for sure.”

Dieumerci Mbokani had cancelled out Roberto Firmino‘s opener with a brilliant back-heel before Steven Naismith put Norwich 2-1 up at half-time.

Wes Hoolahan converted a penalty after Alberto Moreno fouled Naismith, before Jordan Henderson and then Firmino scored to level matters.

James Milner scored after Russell Martin’s terrible back-pass to put Liverpool in front again, but Sebastien Bassong thought he had earned a point for Norwich with a stoppage-time strike, only for Lallana’s winner.

“At the end we can be really happy with everything, nearly everything, especially with the three points,” Klopp said.

“But a draw would’ve been deserved for both teams.”

Norwich boss Alex Neil was crestfallen after watching his side give away a 3-1 lead. He said: “We were good value for 3-1. I thought we were the better side.

“They scored really quickly after we got our third goal, through poor defending from us.

“I don’t really know what to say. Defensively they made extremely poor decisions, cost ourselves three points, because we had it comfortably.

“We failed to make correct decisions at vital times in the game and it cost us goals.

“People’s lasting memory of this game will be what happened in the last 25 minutes of this game.

“Up until then everything was going well for us, but then we transpired to really be the makers of our own downfall, through poor decision making, not looking after the ball, looking nervous and edgy at the back and basically not defending our box well enough.

“I didn’t really celebrate the fourth goal, because I couldn’t believe what I was seeing.

“I’m extremely angry. And so should they be. Angry with themselves, frustrated.

“We managed to score four goals at home, which should mean we’re going home with three points.”